By Rudaw 16 hours ago
Oshano Nisan Hozairan a National Bait al-Nahrain Union candidate in Erbil promised to make “grassroots” changes in favor of his people in the next parliament.
ERBIL, Kurdistan Region – “We are a nation that is behind,” lamented a Christian candidate running in the Iraqi parliamentary election. Oshano Nisan Hozairan says he will put the Christian house in order in Iraq, end the community’s fragmentation, and send “authentic” representatives to the Iraqi House of Representatives.

The National Bait al-Nahrain Union candidate in Erbil promised to make “grassroots” changes in favor of his people in the next parliament.“I am fully committed and promising to work for a better future for Chaldean Syriac Assyrian nations … God willing, I will never be one of those MPs lying to people,” said Hozairan.

Taking part in Rudaw’s special election series, 10 Questions, Hozairan slammed the behavior of past Christian MPs in Baghdad, accusing them of working mainly for Shiites and Sunnis rather than their own people.

“Changes must be made within our community. What kind of changes? I mean those parties that are not for the rights, points of views and interests of [the Christian] nations, we have to cast them aside. We have to build a new leadership among us which should advocate for our rights.”

He called Iraq’s Christians “fragmented.” So long as they remain divided, their demands will not be met, he said.

He strongly condemned the Rafidain List for failing to work for Christians in the Iraqi parliament.

He also slammed the five Christian MPs in Baghdad, saying they “never worked together and united even for one day.”

“My [duty] in Baghdad is to issue laws to stand against discrimination being made between the people of Nineveh, Erbil, Baghdad and others. They are all Iraqi citizens. They must be given equal rights.”

Hozairan, 65, was born in the village of Hawdiyan in Ruwanduz, Erbil. He said Christian representatives in Baghdad and the Iraqi government as a whole had “done nothing” for them.

Sixty Christian candidates are competing for five quota seats in the Iraqi parliament.

Hozairan predicts his list will win two of the four quota seats dedicated to Christians in Erbil, Duhok, and Nineveh and Kirkuk.

There are 329 seats up for grabs in Iraq’s parliamentary election on May 12. Five quota seats have been reserved for Christians, one seat for each of the provinces of Baghdad, Nineveh, Duhok, Erbil and Kirkuk.

In addition to the five Christian seats, the minority quota system allocates one seat each for Yezidis in Nineveh, Mandaeans in Baghdad, Shabaks in Nineveh, and Fayli Kurds in Wasit.

“Iraq has only driven wedges between the groups and pushed them to work against one another,” Hozairan said of successive Iraqi governments.

The candidate was quizzed by Rudaw’s Ranj Sangawi about Article 125 of the Iraqi constitution, which details the rights of minority groups in Iraq.

“Article 125 details that we should enjoy administrative, cultural and political rights. But it does not enshrine that we are entitled to have autonomy right,” Hozairan said, adding that in the Kurdistan Region’s constitution, autonomy in Article 25 has been mentioned for Christians.

“For 82 years, we were not mentioned as a nation in Iraqi constitutions,” he said, adding that other minorities also do not enjoy freedom in the country, including Armenians and Turkmen.

He said history has proven to them that living and carrying out political work in the Kurdistan Region is easier than Iraq.

Following the collapse of the Baathist regime and the outbreak of sectarian conflicts after 2003, the Kurdistan Region provinces remained relatively peaceful and became a refuge for many Christians.

It is estimated that Christians in Iraq make up more than three percent of the population. According to the 1987 Iraqi census, 1.4 million Christians, including the Assyrian community, lived in Iraq. However, many have since migrated to the West after years of persecution and economic hardship.

“I do not believe even two percent of Christians have stayed in Baghdad and other Iraqi areas since ISIS came in 2014. They all fled to the Kurdistan Region,” Hozairan said.

“Many leaders in the name of Christian community said they would work for us, but they even have no contacts with us,” he said.

He was confident that his party would receive the majority of votes among Christian.

In their program, they call for the establishment of a Christian province in the Nineveh plains.

“Whoever slips into the parliament must 100 percent work for the future of this nation,” said Hozairan.

A mixed audience – almost all Christian, but from different parties – attended the program.

Asanis Basa, a Bait al-Nahrain voter, said: “As Bait al-Nahrain, we are an independent party, having our own ideology and points of views. We carry national and patriotic approaches. We are working to serve the Kurdistan nation, especially Chaldean Syriac Assyrian nations, and become a positive factor for the whole of Iraq.”

He said they are confident their party will have a representative in Baghdad.

Viyan Jalal, a voter of the Chaldean National Council, said her party and the Chaldean Democratic Party are running in the election on a joint list in order to secure a seat in the Iraqi parliament, as in the past three rounds of the Council of Representatives they had failed to secure one. 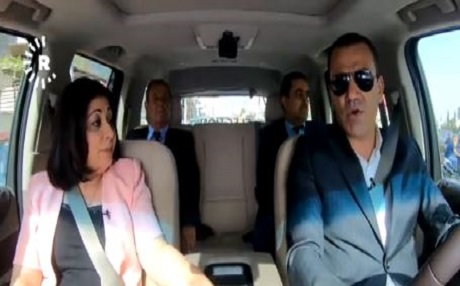 Asked what they have done to convince people to vote for them, she replied “there are many Christian parties while the number of Christians in Iraq has largely reduced.”

“All the Chaldeans have decided to run for the election on a single list so that we could have a representative there,” she said.

She said Christian candidates receive more votes if they run on Christian lists rather than Kurdish and Arab lists.