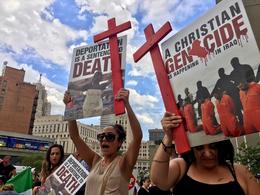 Trump Administration to argue in appeals court that 1,400 Iraqi detainees are danger to public, national security. ACLU counters most have already served time and are Christians who face torture, death if sent back to Iraq.

The Trump Administration is set to argue in federal court that hundreds of Iraqi nationals should be deported from the U.S.

The Administration is appealing an order from a Detroit judge that banned the deportations nationwide.

Immigration officials took about 1,400 Iraqi nationals into custody last June, including 114 from Metro Detroit, saying they’d committed crimes and had already been ordered to be deported to their native home, which had finally agreed to accept them.

But the American Civil Liberties Union argued most of the detainees had already served their time and are Christians who would face torture or death if returned to Iraq.

A federal judge in Detroit agreed and blocked the deportations until the Iraqis could make their case in immigration court.

He also blocked the government from detaining them indefinitely without the chance to post bond.

The Trump Administration counters that the detainees still pose a threat to the public and national security and is appealing both orders.