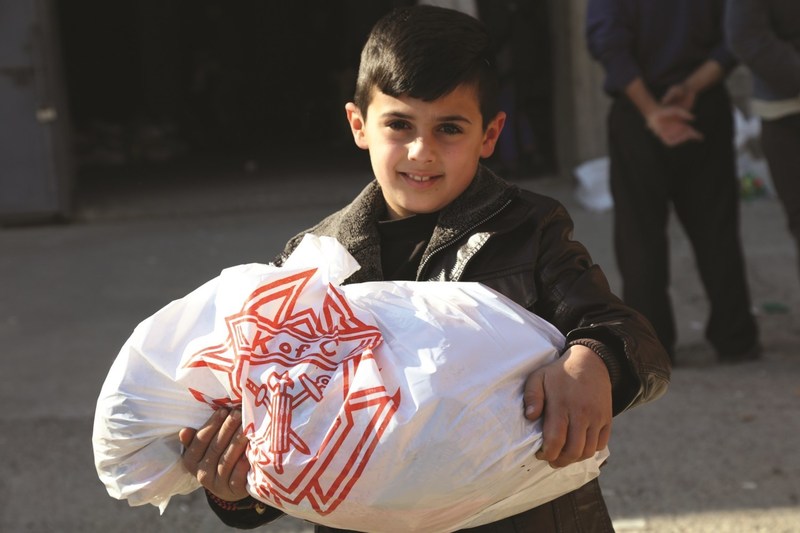 NEW HAVEN, Conn., March 27, 2018 /PRNewswire-USNewswire/ — As Holy Week begins, the Knights of Columbus is transferring more than $1 million in aid to persecuted Christians in the Middle East. The support includes $800,000 in new financial assistance and $250,000 as part of its ongoing commitment to rebuilding an Iraqi Christian town.

The $800,000 brings to almost $19 million the aid the Knights has committed to Christians and other religious minorities in the region since 2014. That total includes $2 million committed to the rebuilding of the predominantly Christian town of Karamles on the Nineveh Plain. Karamles had been overrun by ISIS, which destroyed homes and desecrated churches before it was liberated last year.

“As we recall the passion, death and resurrection of Jesus, it is particularly timely for us to remember and support our brothers and sisters in Christ who have, in places like Iraq and Syria, endured so much persecution for their faith,” said Knights of Columbus CEO Carl Anderson. “Having faced suffering and even death at the hands of ISIS, we hope that our assistance will help these communities to rise up again and rebuild for the future.”

Some $500,000 from the Knights will help support the food program run by the Catholic Archdiocese of Erbil. An additional $300,000 will be sent to the Syriac Catholic Patriarchate to support its aid programs for the nearly 3,000 families from Iraq and Syria who have lost everything and are in need of assistance with food, clothing, shelter, and access to education and medical care.

“Our people know that without the direct support from the Knights of Columbus to Christians in the region, and without its assistance in making our case to the United States government, Christianity might already have been driven out of Iraq completely,” said Chaldean Archbishop of Erbil Bashar Warda, CSsR.

Syriac Catholic Patriarch Ignatius Joseph III Younan wrote that he relied “on [the Knights’] compassion and understanding of our plight in the Middle East, particularly in Syria and Iraq.”

As part of its advocacy on behalf of persecuted religious minorities in Iraq, Syria and the surrounding region, the Knights led a major campaign urging Congress and the State Department to declare ISIS’ terrorism an act of genocide. To support the cause, it produced a nearly 300-page report on ISIS’ atrocities against Christians that was used by the U.S. State Department to supports its 2016 finding that a genocide was indeed taking place.

In addition, the K of C has urged the U.S. government to ensure that communities targeted for genocide not be overlooked in its aid programs and applauded Vice President Mike Pence’s announcement last fall that the Trump administration would begin providing aid directly to religious minorities impacted by ISIS’ genocide.