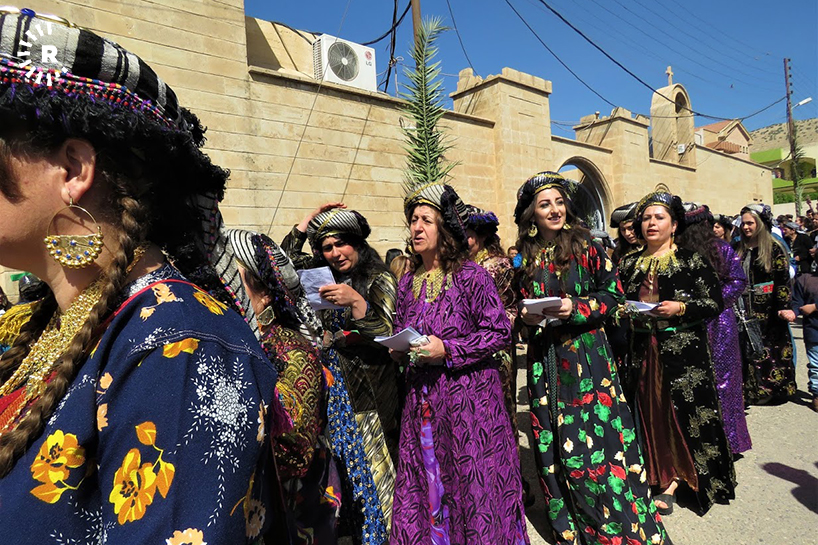 By A.C. Robinson
ALQOSH– Hundreds paraded throughout the village of Alqosh on Palm Sunday, an event to commemorate what Christians believe to be Jesus’ triumphal entry into the city of Jerusalem that initiates the holy week prior to Easter Sunday.
“We’ll start our walk from Qardakh Church to St. George’s Church, one of our traditions in the holy week,” Father Araam from Qardakh Church told Rudaw English. “We want to give hope and peace to people today and to remember God’s promise to take care of us.”

Hundreds of men and women began Palm Sunday in Alqosh, many dressed in traditional clothes, with a 7 a.m. mass. Later another prayer service as held at Qardakh church at 9:30 a.m. before students and staff from the village’s four different schools walked together in groups throughout the town singing songs in Assyrian, Arabic and Italian languages while carrying flowers and palm leaves.

The palm leaves represent how Jesus was welcomed into Jerusalem as a symbol of peace.

“The people here are very proud about this celebration to celebrate Jesus,” said Atheer Desha of Alqosh. “Everyone is wearing new dresses and traditional dresses.”

Youiel Ismail, a Christian from Baghdad, came to Alqosh especially to take part in the Palm Sunday celebrations.

“I am very happy to see how the Christians here celebrate in Alqosh. The people here are very good,” Ismail said.

Following the parade to St. George’s Church, crowds gathered to listen to music and join traditional dances in front of the church.

Once the festivals ended, families came together for special meals to represent the moveable feasts, as observed by Christian saints.

Alqosh, 50 kilometers (31 miles) north of Mosul, is a Christian village in the Nineveh plains that escaped three years of ISIS control in Iraq unscathed.

As ISIS was approaching the village in 2014, most of the residents fled their homes to the safety of Duhok in the Kurdistan Region, with only a small group of people remaining behind to protect their homes against thieves.

Locals say the group who stayed behind claimed an image of the Virgin Mary appeared, and even though ISIS came within three kilometers of the village, the Kurdish Peshmerga forces drove the militants away and their homes have remained safe since.