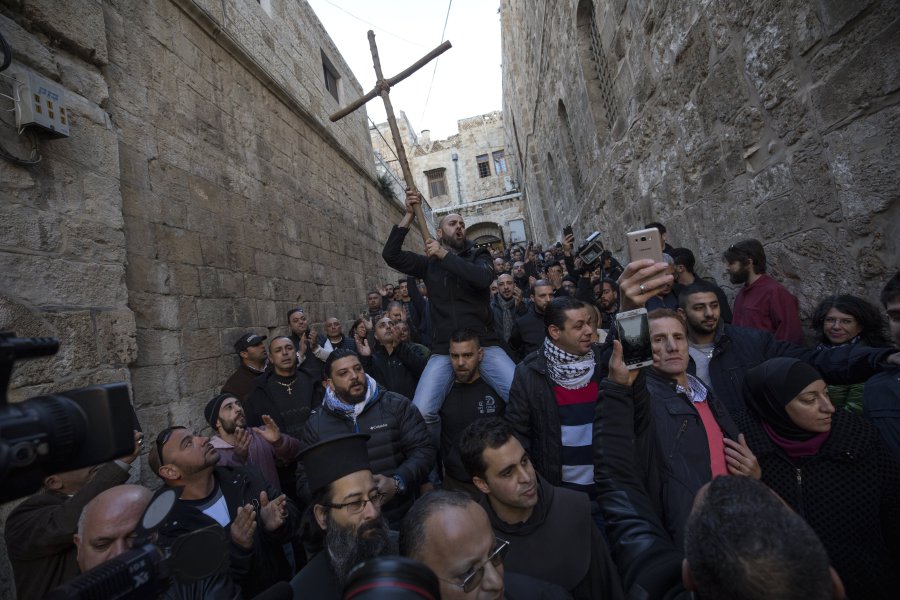 Israel on Tuesday suspended tax measures and other actions that led to the rare closure of the church built at what is seen as the holiest site in Christianity, shut down all week in protest. (EPA photo)
By AFP – February 28, 2018 @ 8:32am

JERUSALEM: Israel on Tuesday suspended tax measures and other actions that led to the rare closure of the church built at what is seen as the holiest site in Christianity, shut down all week in protest.

Christian leaders who have kept Jerusalem’s Church of the Holy Sepulchre closed since Sunday were yet to respond to the decision and it was not clear whether it would reopen imminently.

The closure – which seemed to be the longest since at least 1990 – has left thousands of pilgrims and tourists seeking to visit the site locked outside.

Some have kneeled in front of its large wooden doors to pray in Jerusalem’s Old City.

Dozens of protesters rallied outside the church on Tuesday afternoon in support of Christian leaders.

A statement from Prime Minister Benjamin Netanyahu’s office said a “professional team” would be appointed to come up with a solution to tax measures imposed by Israeli authorities in Jerusalem firmly opposed by Christian leaders.

“As a result, the Jerusalem municipality is suspending the collection actions it has taken in recent weeks,” the statement said.

Israeli Regional Cooperation Minister Tzachi Hanegbi will also look into the issue of land sales in Jerusalem by Christian bodies.

During that time, a proposed law that Christian leaders say would allow Israel to expropriate church land is to be shelved, the statement said.

The church is built where Christians believe Jesus was crucified, buried and resurrected. Custody of it is shared by the Greek Orthodox, Armenian and Roman Catholic denominations.

Christian leaders are in part angry over attempts by Israeli authorities in Jerusalem to enforce tax collection on church property they consider commercial, saying exemptions only apply to places of worship or religious teaching.

He stresses the Church of the Holy Sepulchre and all other churches are exempt, with the changes only affecting establishments like “hotels, halls and businesses” owned by churches.

Christian leaders say the measure jeopardises their ability to conduct their work, which also includes social services to those in need.

A separate controversial bill seeks to allay the fears of Israelis who live in homes on lands previously held by the Greek Orthodox Church and which were sold to private developers, according to the lawmaker proposing the legislation.

The bill would allow certain lands sold by the Greek Orthodox Church to be handed over to the state, which would then compensate those who bought it from the church.

“This reminds us all of laws of a similar nature which were enacted against the Jews during a dark period in Europe,” Christian leaders said in a statement on Sunday.

Recent land sales by the Greek Orthodox Church – a major landowner in Jerusalem – to unknown buyers have drawn fire from both Israelis and Palestinians.

Palestinians fear the sales will favour Israeli settlement construction in east Jerusalem, while Israelis are concerned over private developers’ intentions for the land.

The dispute over the taxes and proposed law is also linked to the Israeli-Palestinian conflict.

The church is located in Israeli-annexed east Jerusalem, which the Palestinians see as the capital of their future state. Israel sees the whole city as its undivided capital.

Christians in Jerusalem are mainly Palestinians and Arab Israelis.

After Tuesday’s suspension, Dimitri Diliani, head of the Palestinian National Christian Coalition, said the “churches were victorious over the occupation.”

Bishara Sahwani, a 48-year-old Palestinian Christian from Jerusalem wearing a large cross and who was among the protesters, said “we’re here to support our church.”

“This is a political play by (mayor) Nir Barkat, who wants to become prime minister and win voters when he decides to run.”

The decision to close the church was extremely rare.

In 1990, Christian sites including the Holy Sepulchre were closed for a day to protest the installation of Jewish settlers near the church.

Christian sites were shut for two days in 1999 to protest the planned construction of a mosque near Nazareth’s Church of the Annunciation, where tradition holds the Angel Gabriel announced to Mary she was to become the mother of Jesus.

Yola, a Syrian-born woman living in the Netherlands for 27 years, said Tuesday her and her children “arrived on Sunday and we haven’t been in as it has been closed.”

“It was frustrating,” she said, adding she had visited the church more than 50 years ago with her family at the age of two. — AFP