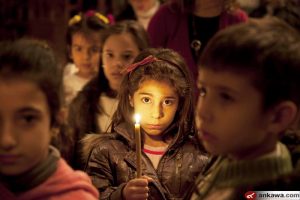 By Murcadha O Flaherty and John Newton
Church leaders across Syria have spoken about the faithful’s suffering following military bombardments in a number of the country’s regions.
In an update received by Catholic charity Aid to the Church in Need, Maronite Archbishop Samir Nassar wrote: “The bombs of 22nd January 2018 have now claimed 24 victims – of which seven were children who were hit as they left school.”
The archbishop described the community’s fear and anguish following the loss of life.
He added: “At the Patriarchate there was more, serious damage – on top of the destruction caused by the bomb of January 8th”.
The initial shelling caused major damage to the Cathedral’s doors and windows as well as fuel tanks and water tanks.
Archbishop Samir Nassar called for prayers for peace tomorrow (January 25th) on the feast of St Paul’s conversion, asking Christians around the world to join with them in prayer when they celebrate Mass.
He wrote: “The Week of Prayer for Christian Unity has turned towards peace and forgiveness.
“Please unite with us in our Eucharist on January 25th – the Feast of the Conversion of St Paul.”
In Afrin, northern Syria, where Turkey started military action on Sunday (21st January), Reverend Valentin Hanan of the Good Shepherd Church made an urgent appeal for an immediate ceasefire – also asking Christians to pray for them.
He wrote: “We call for urgent international protection for the believers in Afrin and to stop the Turkish bombardment.”
Fearful of bombs and the threat of extremism, he added: “At this moment, we are subjected to heavy shelling and the Islamic factions vow to enter the city.
“As a church we ask the Lord first for protection and then ask brethren for prayers and help.”
Describing the Christian community as being under siege, he said that the city has experienced heavy shelling.
There are 250 Christian families in Afrin Canton with 190 families in Afrin city, 45 families in Rajo and 15 families in Maabatli, according to the minister.
Turkey claimed the bombardments were targeting Daesh (ISIS) fighters in the region, but the US-backed Syrian Democratic Forces have disputed this claim.
According to the Syrian Democratic Forces, up to 150 Daesh (ISIS) fighters were killed in air strikes on the Middle Euphrates River Valley in the south-eastern province of Deir al-Zour take took palce on Saturday (20th January). 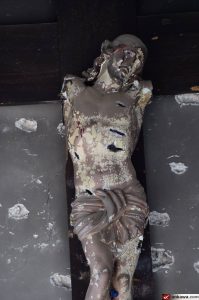