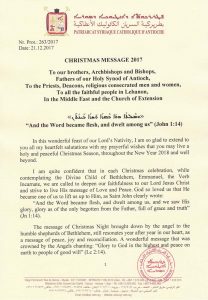 “And the Word became flesh, and dwelt among us” (John 1:14)
In this wonderful feast of our Lord’s Nativity, I am so glad to extend to you all my heartfelt salutations with my prayerful wishes that you may live a holy and peaceful Christmas Season, throughout the New Year 2018 and well beyond.

I am quite confident that in each Christmas celebration, while contemplating the Divine Child of Bethlehem, Emmanuel, the Verb Incarnate, we are called to deepen our faithfulness to our Lord Jesus Christ and strive to live His message of Love and Peace. God so loved us that He became one of us to lift us up to Him, as Saint John clearly wrote:
“And the Word became flesh, and dwelt among us, and we saw His glory, glory as of the only begotten from the Father, full of grace and truth” (Jn 1:14).

The message of Christmas Night brought down by the angel to the humble shepherds of Bethlehem, still resonates year after year in our heart, as a message of peace, joy and reconciliation. A wonderful message that was crowned by the Angels chanting: “Glory to God in the highest and peace on earth to people of good will” (Lc 2:14).

From the Middle East where your Christian brothers and sisters are still enduring a lot of hardship because of the ongoing violent tribulations that undermine their future, I want to remind you how much we need your solidarity and prayer.

Lebanon, the only country where all citizens enjoy the best possible liberty and equality, had to face in the past year a lot of trials. We surely thank God that the Lebanese army could finely overcome the terrorist bands that were threatening its very existence. Given the wisdom of the President of the Republic and other honest politicians, we hope that Lebanon this tiny and unique nation, once called by the late saint Pope John-Paul II: “A Mission” in its environment, will reach the haven of peace and prosperity for all.

During this joyful season, our thoughts and prayers will particularly go to our brothers and sisters in Syria and Iraq, who have been suffering for long, because of their steadfast faithfulness to the Gospel.

Let us remember what Pope Francis wrote in his Message for the 51 World Day of Peace 2018:

“In a spirit of compassion, let us embrace all those fleeing from war and hunger, or forced by discrimination, persecution, poverty and environmental degradation to leave their homelands”.

After many years of been savagely uprooted from their homeland in the Plain of Nineveh in Iraq, forced into exile and scattered in many countries, many thousands of our Syriac families have now the unique opportunity to return home. The terrorist bands are now mostly defeated and hope has risen that at least a good percentage of those who have left their homes and villages in various regions, would like to return home. Their presence as Christian minority that endured every kind of hardship is essential to the rebirth of their respective country.

Along with the other citizens of good will, they are now called to look ahead and embark on reestablishing trust and working for reconciliation among all segments of the population in Syria and Iraq. While there is still a lot to do that would inspire confidence to our eradicated and exiled community in order to return to their ancestral land, we have to keep hoping that the local governments and the international instances will definitely expel the terrorists and restore peace and security.

We, as the shepherds of the flock will keep speaking up as John the Baptist, “crying loud in the wilderness…” to defend the human rights of our Christian people in the Middle-East, pleading with the world civil and political instances, for justice and liberty for them and for all persecuted minorities.

Economic sanctions on Syria must be lifted. They are like crimes against humanity because they target the most vulnerable segments of a nation. Poor and defenseless people are the ones who pay the price. The family of nations must look for other ways to deal with a legitimate country recognized by the United Nations, even if this government happened to be taxed by some country or organization, as an outlaw regime.

In this Christmas message, I have the joy to announce to you that a Convention of Syriac Catholic Youth will be held from July 17-22, 2018 in Lebanon, with a title: “Come and See” )Jn 1:46). Our young people old between 18-35 from all diocesan and parish communities in the Middle East as well in the Church around the world will be invited to participate.

Another great event will take place July 28-29. 2018, in Charfet, Lebanon, it is the commemoration of the fiftieth anniversary of the departure into heaven of a great figure of our Church, the late Patriarch and Cardinal Mar Ignatius Gabriel TAPPOUNI. This tribute to an outstanding shepherd will follow the Youth Convention.

Jesus words are for us a beacon that guides our live. We cherish to repeat to you what Jesus said to his disciples: “Do not be afraid, little flock!”. Yes, Lord, as long as you walk with us, there is nothing to fear of and nothing will be able to separate us from you!

With a great joy, I impart on you, your dear ones my apostolic blessing: May the Almighty and One God bless you, the Father, the Son and the Holy Spirit Amen. 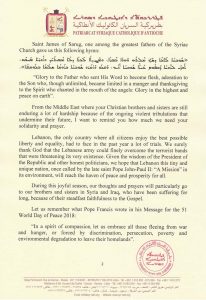 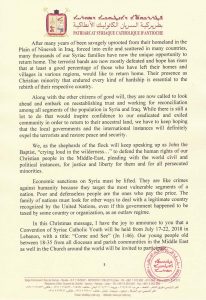 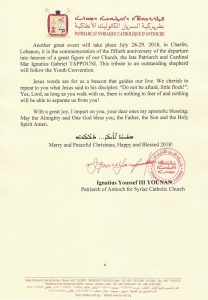