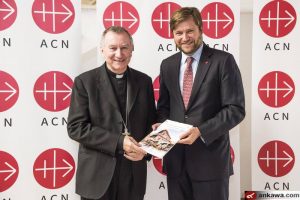 By John Newton
THE Vatican’s Secretary of State has warned that Iraq’s ancient Christian community is struggling for its very survival – and has made an urgent call for the rights of all minority groups to be respected.
Cardinal Pietro Parolin, who ranks second behind Pope Francis in the Vatican, issued his stark warning yesterday (Thursday, 28th September) at a conference in Rome organised by Catholic charity Aid to the Church in Need.
Speaking at the meeting about the future of Iraq’s Christians, Cardinal Parolin said: “We are all aware that the conflicts and tensions of recent years represent a risk, not only for the survival of Christians – but also for the very possibility that the Middle East can be a place of coexistence between peoples belonging to different religious and ethnic groups.”
His remarks come after a referendum on independence for Kurdistan, the region of northern Iraq where Christians found sanctuary following the Daesh (ISIS) occupation of the nearby Nineveh Plains.
Cardinal Parolin stressed that Pope Francis was personally concerned for the survival of Iraq’s ancient Christian community.
He said: “From the outset, the Holy Father has followed with deep concern the tragedy of the thousands of families forced to abandon their own cities and villages due to the invasion of the so-called Islamic State, starting in June 2014…
“The Holy See… has missed no opportunity to speak out on behalf of those Christians, reiterating on numerous occasions the necessity of facilitating their return and ensuring adequate measures of protection and respect for their rights.”
The prelate praised Aid to the Church in Need for its help both for displaced families who were driven out of the Nineveh Plains in 2014, and its role in the plans to rebuild destroyed Christian towns and villages in the region.
He said: “I would like to express my sincere appreciation for the support provided by Aid to the Church in Need in the three years since the ISIS invasion, which has enabled the many uprooted Christian families to endure this situation with dignity and in security.
“Your reconstruction project… is yet another sign of the concern you have shown, with a sense of urgency and with remarkable efficiency and organisation.”
He added: “The process of reconstruction started by [ACN], and the return of Christians to a degree of normality in their lives, should be the primary and urgent objective of our efforts.
“This will allow the Christian community in due course to face up to other challenges that await them, so that they can be fully and generously engaged in working for the common good of the entire nation.”
The conference, which took place 27th–28th September, brought together politicians, ambassadors, entrepreneurs and other parts of the international community seeking to enable the return of Christians to their ancient homelands.
Also speaking was Chaldean Patriarch Louis Raphael I Sako of Baghdad who described the attacks by extremist Islamist groups on the Nineveh plain’s Christians as “genocide”.
He said: “The real reason behind this kind of discrimination is the hatred of the radical Muslim persecutors towards the Christians, which has driven them to wipe away our heritage, destroy our homes and even to remove us from the memory of Iraqi history.”
The Chaldean Patriarch highlighted five areas where immediate action was needed – education, political support, security and stabilisation of liberated areas, humanitarian aid, and defeating fundamentalism and terrorism.
The patriarch’s five points echoed Cardinal Parolin’s call for social harmony so that all religious and ethnic groups in northern Iraq could live in peace.
Cardinal Parolin said: “The greatest challenge, then, is to create the social, political and economic conditions to enable a new social cohesion, which favours reconciliation and peace, and gives to Christians and other minorities the possibility of working to rebuild the future of a country where their presence is deeply rooted.”