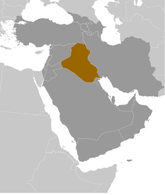 Dozens of metro Detroit Iraqis await deportation or cancellation of removal orders.
DETROIT (AP) — The U.S. government says it will appeal an order that suspended the deportation of 1,400 people to Iraq, many metro Detroit residents.
It’s unclear why the Justice Department waited nearly two months after the injunction was signed by a Detroit federal judge. The appeal notice was filed Thursday.

In July, Judge Mark Goldsmith blocked the deportation of Iraqi nationals to give them time to challenge their removal in immigration court.

Click here to read WDET’s story about the July order.

Many are Christians who fear they’ll be tortured or killed if sent to Iraq.

The government says the Iraqis have committed crimes in the U.S. and must be kicked out now that Iraq will accept them. Roughly 21 percent of the 1,400 are in custody at federal detention centers. Some are on hunger strikes, and some have asked Gov. Rick Snyder for pardons.

State Rep. Klint Kesto (R-Commerce Township) appeared on WDET’s Detroit Today with Stephen Henderson program earlier this year to discuss the deportations. He’s the first Chaldean elected to the Michigan House of Representatives and a board member of the Chaldean American Chamber of Commerce. He says many Chaldeans in metro Detroit have supported President Trump.