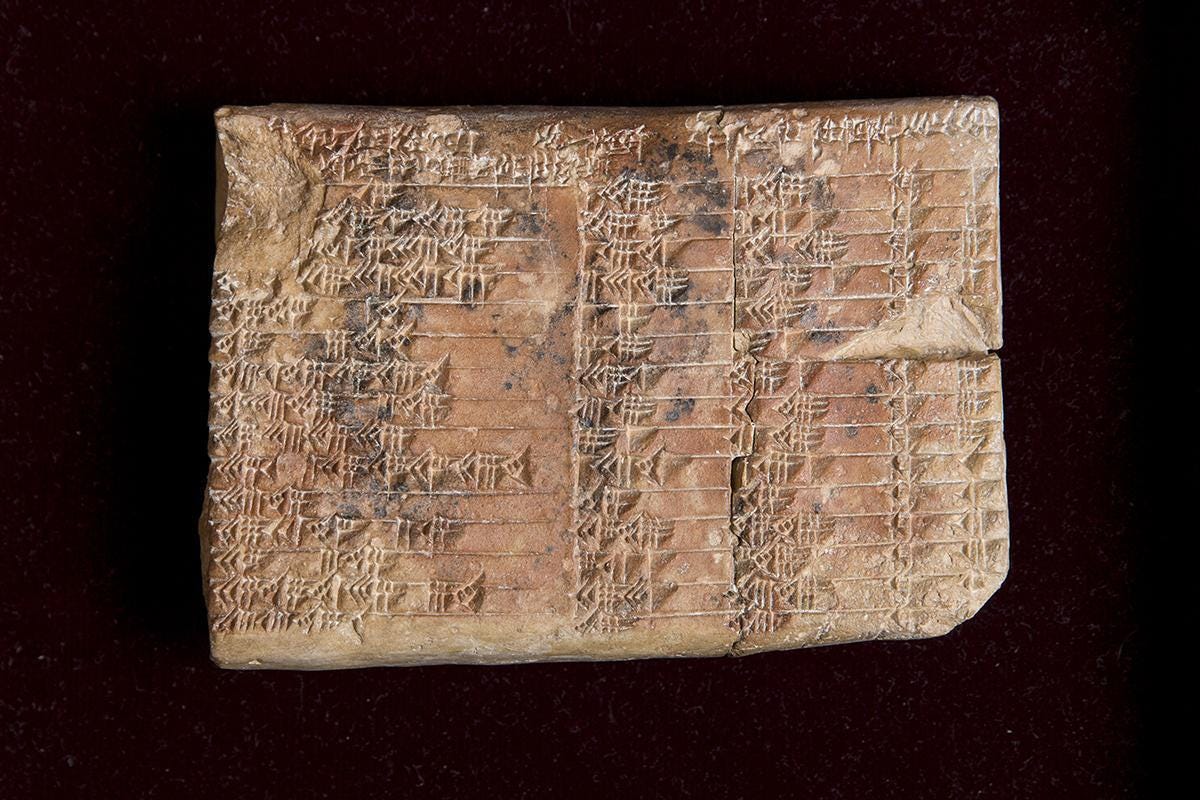 They also beat the Ancient Greeks to it, according to Australian academics
Ian Johnston Science Correspondent
The Babylonian tablet Plimpton 322 has numbers written in cuneiform script UNSW
The Ancient Babylonians knew about a form of trigonometry more advanced than the modern-day version – about 1,000 years before its supposed invention by the Ancient Greeks, academics in Australia say.

The astonishing claim is based on a 3,700-year-old clay tablet inscribed with a table of numbers.

Known as Plimpton 322, it is already known to contain evidence that the Babylonians knew Pythagoras’ famous equation for right-angled triangles, long before the Greek philosopher gave his name to it.

And researchers at the University of New South Wales (UNSW) have claimed it also shows the Babylonians developed a highly sophisticated form of trigonometry – the system of maths used to describe angles that has tortured generations of school pupils with sine, cosine and tangent.

The city of Babylon in Mesopotamia, an early cradle of human civilisation in what is now Iraq, was famed for its Hanging Gardens, said to be one of the Seven Wonders of the ancient world.

And mathematician Dr Daniel Mansfield suggested its people developed trigonometry to help their architects design the city’s major buildings.
This Game Is a Must-Have for Anyone Who Owns…Throne: Free Online Game
His Neighbors Were Outraged at First. Now They Think H…LikelyThings
12 Cool And Cheap Gadgets You NeedShare The Buzz

“Our research shows it’s a trigonometric table so unfamiliar and advanced that in some respects it’s superior to modern trigonometry,” he said.

“We’ve discovered these lines represent the ratios for a series of right-angled triangles ranging from almost a square to almost a flat line.

“This makes Plimpton 322 a powerful tool that could have been used for surveying fields or architectural calculations to build palaces, temples or step pyramids.”

Dr Mansfield explained that the Babylonians’ system of counting enabled them to perform complicated calculations more easily that mathematicians today.

“That’s problematic if you want to divide. For example, one dollar divided by three is 33 cents with one cent left over.

“The Babylonians counted in base 60, the same system we use for telling time. This has many more exact fractions.

“It doesn’t sound like much, but this allowed them to do a lot more exact division. One hour divided by three is 20 minutes – exactly.

“By using this system, the Babylonians were able to make calculations that completely avoided any inexact numbers, thereby avoiding any errors associated with multiplying those numbers.”

And the Babylonian system might actually have lessons for science today, he claimed.

“With this greater accuracy we think this system has enormous potential for application in surveying, computers and education,” Dr Mansfield said.

“It’s rare that the ancient world teaches us something new. After 3,000 years, Babylonian mathematics might just be coming back into fashion.”

Plimpton 322 was discovered in southern Iraq by the early 1900s by archaeologist, diplomat and antique dealer Edgar Banks, who was the inspiration for the character of Indiana Jones.

The tablet has numbers written in cuneiform script in four columns and 15 rows.

There were suggestions in the 1980s that the numbers showed knowledge of trigonometry, but this had been dismissed more recently.

But Dr Mansfield said their research revealed it was a “novel kind of trigonometry” that was based on ratios, rather than angles and circles.

“It is a fascinating mathematical work that demonstrates undoubted genius,” he said.

One problem with Plimpton 322 is the left-hand edge is broken.

The UNSW researchers presented mathematical evidence that it originally had six columns, rather than four, and 38 rows, not 15.

They believe ancient scribes could have generated numbers using the tablet, which they suggest was a teacher’s aid to checking students’ quadratic equations.

Hipparchus, a Greek astronomer who lived in about 120 BC, is traditionally regarded as the founder of trigonometry.

“It opens up new possibilities not just for modern mathematics research, but also for mathematics education. With Plimpton 322 we see a simpler, more accurate trigonometry that has clear advantages over our own.

“A treasure-trove of Babylonian tablets exists, but only a fraction of them have been studied yet. The mathematical world is only waking up to the fact that this ancient but very sophisticated mathematical culture has much to teach us.”

A paper about the research was published in Historia Mathematica, the official journal of the International Commission on the History of Mathematics.