“We cannot allow that to happen,” said Sanders, speaking at town hall-style meeting in Detroit focused on healthcare.

“We’ve protected these people in the past. We’ve got to protect those people and those children, by the way, in the future.” 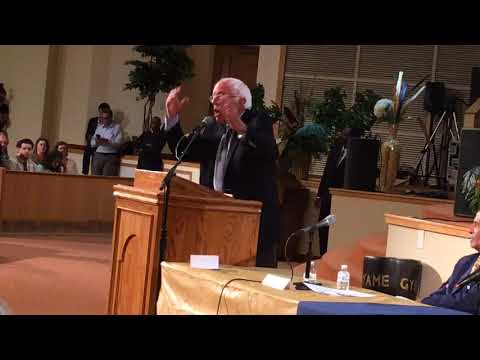 While the theme was healthcare strategy in the President Donald Trump era, Sanders spoke as if he was still campaigning.

The senator from Vermont was responding to a question from a young Chaldean woman in the audience who asked him for help in their fight to free relatives who were arrested by ICE in early June.

The American Civil Liberties Union (ACLU) filed a lawsuit shortly after the Detroit arrests, arguing that sending back the Iraqi immigrants – many of whom are part of a Christian sect long targeted by extremist groups – may result in torture, persecution or death.

A federal judge ruled in late July that hundreds of detained Iraqi nationals facing deportation shall be allowed to stay in the U.S. at least long enough to try and reopen their cases in immigration court. A federal judge has ordered a temporary stay on the deportation of 114 Iraqi nationals arrested by Immigration and Customs Enforcement agents earlier this month.

U.S. District Court Judge Mark A. Goldsmith issued the preliminary injunction against their removal, meaning about 1,400 Iraqi who have previously been ordered removed from the country, including 114 who were arrested in Detroit in June, will have time to seek protection from deportation.

The immigrants had been ordered out of the country years ago as a result of criminal convictions or overstaying visas, but they were allowed remain in the U.S. under federal supervision because of the dangers they could face if sent back to Iraq. Man set to be deported to Iraq doesn’t even speak Arabic, family says

His family is terrified for the “hardworking family man,” but Hadeer Siba is also no angel. He’s an Ypsilanti High graduate with his own auto body repair shop in the Ypsilanti area.

That changed after a March deal with the Iraqi government in which the war-torn Middle Eastern nation agreed to begin taking back U.S. immigrants who had been ordered removed, leading to a wave of June arrests by Immigration and Customs Enforcement agents.

A federal judge will make a decision on whether to stop Immigration and Customs Enforcement from deporting dozens of immigrants in Metro Detroit.

The woman asking the question on Tuesday night mentioned that deal in her remarks to Sanders.

“Thank you for raising the issue of immigration, which we have not touched on tonight,” Sanders said.

“Obviously it goes without saying I and John completely disagree with what (President Donald) Trump is trying to do. Bottom line is that in this country, we have some 11 million people who are undocumented.”

Sanders concluded by saying it is clear there is widespread support for comprehensive immigration reform, including path toward citzenship.

“We’re working as hard as we can, obviously under the very difficult situations we have with Trump.”

WATERFORD, MI — Waterford police say a 28-year-old man was shot and killed after charging officers following a 3-hour-plus standoff Thursday morning. His wife called 911 and fled a residence on the 2000 block of Sunhill Drive in Waterford Township about 3 a.m. after she was attacked, police say. Police arrived and contacted the husband by phone. He threatened to kill officers, himself and light the house on fire, Waterford police said in a statement issued Thursday morning. A gunshot was heard inside, but police reached the man by phone and learned he was still alive. The Oakland County Sheriff’s Office was called to the scene and established a perimeter around the residence. As they arrived, the man emerged from the house briefly and retreated. Police held multiple additional phone conversations with the man, during which he continued to make threats. “Shortly after the last phone contact, the subject exited the house with a loaded shotgun,” Waterford Township police said. “He walked through the side tree line and charged and officer, at which time he was shot.” We was transported to the hospital and died. Police have not released the man’s identity. When they searched the home after the shooting, they discovered gasoline had been poured throughout the house and the gas valves in the home had been left open.