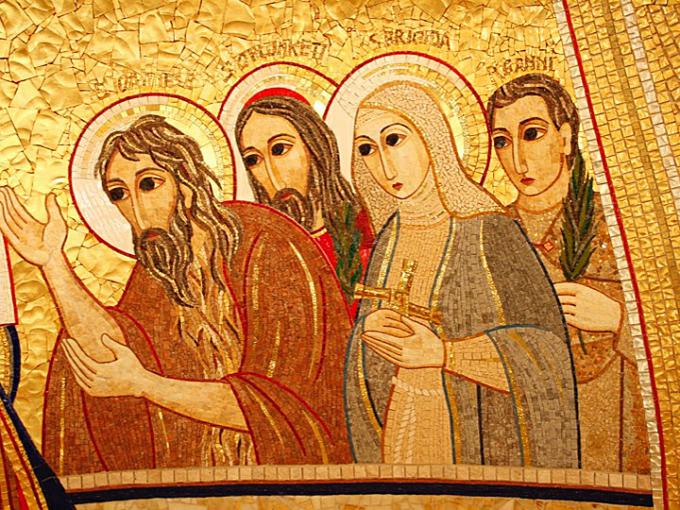 This mosaic is from the apse in the Chapel of the Saints of Ireland at the Irish College. From left to right: St. John the Baptist, St. Oliver Plunkett (martyr and alumnus), St. Brigid, and Father Ragheed Ganni. Father Ragheed holds the martyr’s palm. Courtesy photo
Msgr. Liam Bergin
Help us expand our reach! Please share this article on social media
Father Ragheed is referred to as “Father Ragheed of the Eucharist.” The mystery of the Body and Blood of Christ was his strength and support.

Pope Francis recently visited St Bartholomew Basilica in Rome, this church sits on an island in the middle of the Eternal City’s Tiber River, and guards the memories of Catholic, Orthodox and Protestant Christians murdered for professing their faith in recent decades. During the prayer service Pope Francis wore a red stole that had been owned by one of those martyrs Father Ragheed Ganni.

Father Ragheed Ganni was brutally murdered along with three subdeacons after he had celebrated Mass for his parish community in Mosul, Iraq just 10 years ago on June 3, 2007. One of his executioners demanded to know why Father Ragheed had not closed down the church as he had been ordered to do. “How can I close the house of God?” he replied as he was gunned down. Father Ragheed was just 35 years old. He had been ordained a priest in Rome only six years earlier.

Father Ragheed was my student at the Pontifical Irish College in Rome from 1996-2003. Intelligent, prayerful and wonderfully extroverted, he was friend and guide to many. Previously, he had studied engineering in Iraq and had served briefly in the first Iraqi war. When he discerned his vocation to priesthood, his bishop, conscious of Ragheed’s potential, sent him to Rome to study.
Advertisement

Ordained a priest in Rome in 2001, Father Ragheed completed graduate studies in theology before returning home in 2003. He was a member of the Chaldean Catholic Church, an ancient Church with its own distinctive liturgy and customs and laws. Before the second invasion of Iraq in March 2003, there were 1.2 million Chaldean Catholics in the area. Today, there are just 400,000. His native city of Mosul is now at the epicenter of the battle against ISIS.

Father Ragheed celebrated the liturgy for his parishioners and knew its importance in their lives. He knew the danger he faced by deciding to remain in his parish. He was to receive many threats but he refused to put his own safety before the spiritual and physical welfare of his people. In 2005 he was invited to speak at the National Eucharistic Congress in Italy. “Without the Sunday Eucharist we cannot live,” he stated. “In normal times, everything is taken for granted and we forget the greatest gift that is made to us. Ironically, it is thanks to terrorist violence that we have truly learnt that it is the Eucharist, the Christ who died and is risen, that gives us life. And this allows us to resist and hope.”

For Father Ragheed the danger was real. During his last visit to Italy in November 2006, he and another Iraqi friend went for a drive to Nemi, a beautiful hilltop town near Rome that overlooks a volcanic lake. One of the squares in the town is now called “Victims of Terrorism Square.” When Father Ragheed saw the name he asked his friend to take his photograph under it. “This is us,” he said. Half joking, but deadly serious, “This is us.”

Today Father Ragheed is referred to as “Father Ragheed of the Eucharist.” The mystery of the Body and Blood of Christ was his strength and support. He wrote, “There are days when I feel frail and full of fear. But when, holding the Eucharist, I say ‘Behold the Lamb of God, who takes away the sin of the world,’ I feel His strength in me. When I hold the host in my hands, it is really He who is holding me and all of us, challenging the terrorists and keeping us all united in His boundless love.”

He was a fine singer and his voice did justice to the haunting chants of the Chaldean liturgy as he broke bread for his broken people. He also served their human needs, particularly by calming their anxiety as attacks on Christians became more common. During that last visit to Rome he told me the story of how his church was attacked by rockets at the end of the First Communion ceremony. The children were frightened but Father Ragheed pretended that the rockets were fireworks being set off to celebrate the First Communion and he kept them singing in the Church until the danger had passed!

Ireland’s President Mary McAleese met Father Ragheed in Rome and in Ireland and they became firm friends. She was among the many who mourned Ragheed’s tragic death but believed his sacrifice was not in vain. “Father Ganni lived in a world where hatred always threatened to overwhelm love,” she commented. “That hatred took his life — obliterated it — but it did not obliterate love, nor did it nor could it ever obliterate his legacy. That legacy is an enduring certainty that the greatest challenge to evil is infinite love. … That witness to love in action, to love even in chaos, disturbs the hearts of those who would hate and it lights the pathway that they would prefer had no roadmap, no signposts to the fullest flowering of human potential — a world that cherishes all its children equally.”

Father Ragheed is buried in his hometown of Karamlish, one of the many Chaldean settlements near Mosul that is now in ISIS control. His image is represented in the apse of the chapel at the Pontifical Irish College in Rome where the relics of the 17th-century Irish martyr bishop St. Oliver Plunkett are wrapped in the priestly stole of Father Ragheed. Commenting at the time of his death, Pope Benedict XVI noted that “Ragheed’s sacrifice will inspire in the hearts of all men and women of good will a renewed resolve to reject the ways of hatred and violence, to conquer evil with good and to cooperate in hastening the dawn of reconciliation, justice and peace in Iraq.” If ever such inspiration were needed, it is now.

MSGR. LIAM BERGIN IS A PRIEST OF THE IRISH DIOCESE OF OSSORY. HE SERVED AS THE RECTOR OF THE PONTIFICAL IRISH COLLEGE IN ROME. HE IS CURRENTLY PROFESSOR OF THEOLOGY AT BOSTON COLLEGE AND LIVES AT ST. BRIGID, SOUTH BOSTON.