Relationship with Syrian refugees created strong bond between Christian and Muslim communities
CBC News
Najam Jutt helps lead prayers at the Leamington mosque, which is set up inside the community hall at an Anglican church. (Dale Molnar/CBC)
Muhammad Asghar kneeled on the floor alongside a couple of dozen fellow Muslims last week silently praying. When he looked up and turned his head, he smiled at the Anglican priest kneeling behind him.

“To my amazement, he came and joined me in the prayer,” Asghar said.

A Christian clergyman kneeling inside a mosque would normally be an unusual occurrence, but in Leamington — the small farming community in southwestern Ontario — it’s become a common sight.

Asghar and many others regularly pray at St. John the Evangelist Anglican Church, where the Muslim community has set up a mosque, thanks to a deal worked out between the two religious communities.

Muhammad Asghar, right, and Rev. Andrew Wilson of St. John the Evangelist Anglican Church in Leamington, Ont. stand next to each other during a Muslim prayer last week. The church rents space to the Muslim community in order for them to have a mosque to pray in every week. (Dale Molnar/CBC)

The emerging relationship between the groups can set an example for the entire community, said Taha Halabi, who also regularly attends prayer.

“We tried to show the community in Leamington, and everywhere in Ontario, that Muslims and Christians are hand to hand,” he said.

The arrangement started in September when the church invited Syrian refugees to its annual picnic. Everyone who showed up liked the community hall, which is regularly rented out to a host of different groups.

At the time, Rev. Andrew Wilson offered the space to be used as a mosque after learning the Muslim community had been renting a tiny location that was not big enough for their needs.

Rev. Andrew Wilson offered space at St. John the Evangelist Anglican Church to be used as a mosque. (Meg Roberts/CBC)

By the month of Ramadan, which started in late May, the hall was rented to serve as a mosque, and hundreds came to worship during the time of fasting. The mosque now regularly has 30 to 40 people coming in for the prayer service.

For Wilson, the storyline smacks of the CBC television series Little Mosque on the Prairie.

“It’s almost the exact same story,” he said. “That always makes me giggle. We’re kind of imitating art in a sort of way.”

Learning from one another

Najam Jutt, who helps lead the prayers at the Leamington mosque, has heard of other churches and mosques sharing locations in an effort to help each other out.

“We absolutely love it,” he said. “It highlights how we all work together for a common cause.” 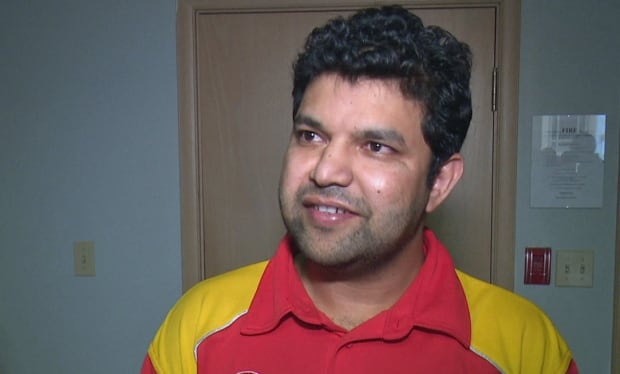 Muhammad Asghar and many others regularly pray at St. John the Evangelist Anglican Church, where the Muslim community has set up a mosque. (Dale Molnar/CBC)

When Asghar moved to Leamington from Toronto last month, he suspected the small town would not have a place for him to pray.

Parishioners at the Anglican church have welcomed their new tenants. Charlotte McDonald has been going to St. John the Evangelist for more than 50 years.

“We’ve welcomed refugees into our country as our brothers, sisters, neighbours and friends, and this is an opportunity to invite them into our church as well,” she said.

She too hopes people in the region can learn from the example the two communities have shown.

“We cannot gain peace in this world, until we can live together with one another in one community,” she said. “That’s just reaching out and saying here we are together — brothers and sisters of this Earth, regardless of religion, creed, colour, it doesn’t matter.”