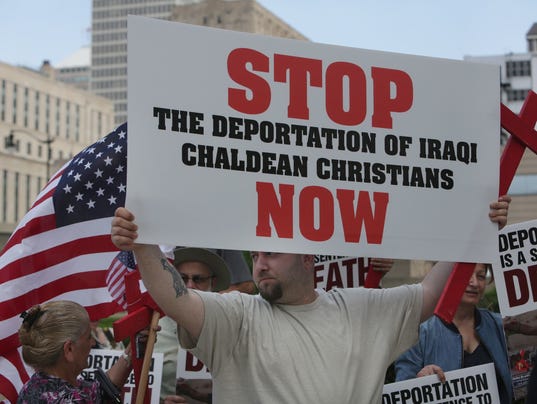 Days after a federal judge temporarily blocked the possible deportation of 114 Iraqi immigrants arrested in metro Detroit, attorneys are trying to take the case nationwide.

In a filing in federal court in Detroit today, attorneys representing the immigrants and the American Civil Liberties Union of Michigan say more than 1,400 Iraqi nationals could be deported and face “the very real probability of persecution, torture or death” based on the recent government actions. The filing seeks class-action status for the case.

“These individuals, many of whom have lived in the United States for decades and have U.S. citizen spouses and children, now face deportation as a result of (U.S. Immigration and Customs Enforcement’s) sudden decision to remove them based on removal orders, which may be decades old,” according to an amended complaint filed in federal court in Detroit.

The filing follows an order issued Thursday by U.S. District Judge Mark Goldsmith that allows the 114 Detroit area immigrants, some with criminal records and others who overstayed their visas, to stay in the country for two weeks while he decides if the court has jurisdiction.

The latest filing said that even though most of the Iraqis were ordered to be deported years ago, “the government released them, often under orders of supervision.” Most of those arrested in the Detroit area were Chaldeans, or Iraqi Catholics.

In addition to its metro Detroit roundup on June 11, ICE agents arrested 12 Iraqis in Nashville, Tenn., at about the same time and made similar arrests in New Mexico and San Diego, the filing said, noting that about 200 Iraqis are currently being detained nationwide and eight are believed to have already been deported.

A message seeking comment was left for an ICE spokesman.