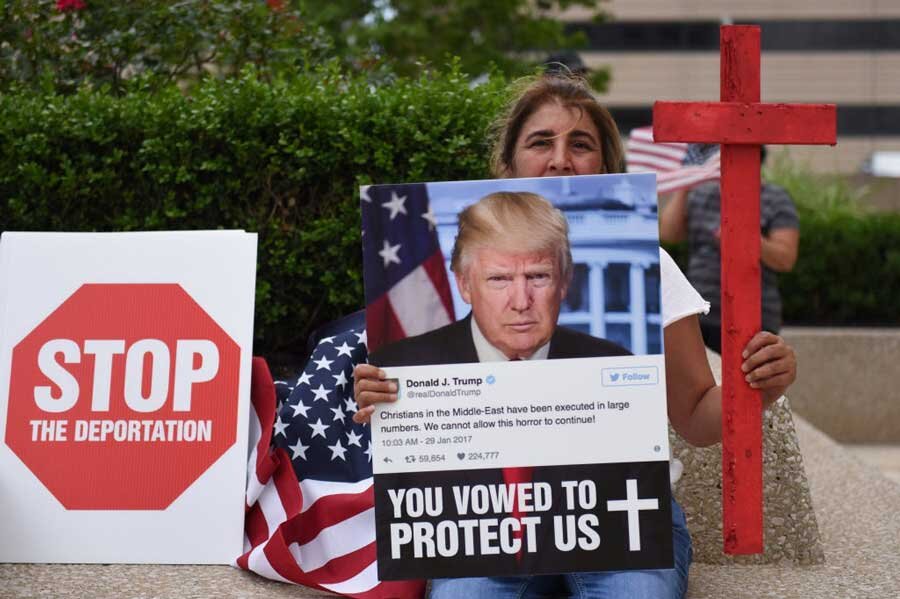 After more than 100 Iraqi Christians were rounded up for deportation in June, the American Civil Liberties Union filed a class action suit on behalf of the detainees. On Wednesday, a federal judge heard arguments on whether to grant an emergency stay.
About these ads
June 21, 2017 Detroit—Like many 30-somethings, Alen Hirmiz has tattoos. His – a large one of a cross and one of Jesus on each arm – bear witness to his Christian faith. His sister and family are now afraid they could endanger his life.

On June 11, a Sunday, immigration agents detained Mr. Hirmiz in front of his shocked parents at the family’s home in suburban Detroit. He’s now waiting in a holding facility in Youngstown, Ohio, where – barring an emergency stay – he will be sent back to an Iraq he hasn’t seen since he was a teenager.

“If he enters Iraq,” his sister Alina Senawi says, “he will be killed.”

Hirmiz’s detention was part of a broader federal operation that ensnared roughly 200 Iraqi-born immigrants, including 114 from Metro Detroit, the vast majority Chaldean Christians. Christians in Iraq are routinely targeted by the so-called Islamic State and other militia groups.

Immigration and Customs Enforcement says that all of the detained have criminal convictions, that their removals are in the interest of public safety. But family members and advocates say those slated for removal have already served their time – and that sending Christians to a region where they’re actively hunted by terrorists amounts to a death sentence.
Could you pass a US citizenship test?

It also would violate United States law, say lawyers for the American Civil Liberties Union, which filed a class action suit against the federal government on behalf of the detainees. The ACLU says, under the law, the detainees must be given an opportunity to prove they could face torture or death if returned to Iraq.

On Wednesday, a federal judge heard arguments on whether to grant an emergency stay. “Not only is it immoral to send people to a country where they are likely to be violently persecuted, it expressly violates United States and international law and treaties,” Kary Moss, executive director for the ACLU of Michigan,” said in a statement.

Beyond the legal questions, the case of the Iraqi Christians offer a window of deeply conservative people of faith who now find themselves baffled at their loved ones being caught in raids by the Trump administration. Chaldeans overwhelmingly favored the Republican candidate, ultimately helping deliver a close victory in politically crucial Michigan.

They thought, many of those interviewed said, that the president would safeguard their families because of their Christian faith.

“Everybody supported him – we all wanted Trump because we thought Trump would do good for us,” Steve Yaldo, an American-born Chaldean who lives in Southfield. “And now it’s like he turned his back on us.”

Hirmiz’s family is not claiming the young man, who was born in Iraq and came to the US when he was a teenager, is innocent of the crime he was convicted of. When he was in his early 20s, he went to prison for taking part in a home invasion. But he served his sentence and had straightened out, Ms. Senawi said. Before his detention this month, he supported his family through his work at a grocery store.

According to the Associated Press, immigration officials said a judge determined the detainees were “ineligible for any form of relief under US law,” but declined to discuss the appeal process or specifics about the crime. Most of the removal orders had been issued some time ago, some under the Obama administration, but ICE could not remove the men until an agreement was reached with Iraq in March.

Chaldeans are Eastern Catholics who trace their ancestry to Mesopotamia, in present-day northern Iraq, and traditionally spoke Aramaic. In the 1920s, facing religious oppression and seeking economic opportunity, many began immigrating to Detroit. In southeast Michigan, the community now numbers more than 120,000, about half the total US Chaldean population.

The community is socially conservative and usually leans Republican, but in last year’s election Chaldeans were particularly energized. “I have never seen the enthusiasm we had this year to go out and vote,” Martin Manna, president of the Chaldean Community Foundation, told the National Catholic Register in December. “Many issues motivated people,” he added, “but especially what is happening to Christians in Iraq and Syria.”

“Many [Chaldeans] have hope with President Trump,” Mr. Manna said in a February interview.

In light of the June sweeps, some Chaldeans who voted for Trump, like Mr. Yaldo, can’t fathom why Iraqi Christians would continue to support him. Others are unsure about their loyalty. “I voted for Trump,” says Hala Barka, a phlebotomist. “I don’t think he’s a bad guy.”

But when asked by a reporter if she still supported him, Ms. Barka paused. “I’m not sure right now,” she said. “I can’t answer that.”

At a protest in downtown Detroit Friday, a crowd of about 100 Chaldeans and supporters carried red crosses and erupted into passionate chants of “USA” and “Stop Deportation! Bring Our Families Home!”

Speakers, including Rep. Sander Levin, a Democrat who represents Detroit’s northern suburbs, lauded Chaldeans’ contributions and decried the arrests as a needless human rights violation. Many of the immigrants had come in the first place, the congressman said, “to escape what American leaders from both parties have called genocide.” The crimes the Iraqi Christains were being deported over occurred “decades ago,” Levin said, adding that for the US, “there’s no real threat here.”

One elderly man, Jalal Marcos, stood stoically off to the side holding a sign depicting a portrait of Trump above one of the president’s tweets: “Christians in the Middle East have been executed in large numbers. We cannot allow this horror to continue!”
Follow Stories Like This

Get the Monitor stories you care about delivered to your inbox.
Sign Up

Mr. Marcos was born in Iraq. His 37-year-old son, the father of two little girls, was recently detained, he told the Monitor with the help of a translator.

“He said he would protect us,” Marcos said of the American president. “It’s wrong.”