Qaraqosh was ravaged by ISIS, who seized it in June 2014 as they rampaged across parts of northern Iraq. Although the group has been expelled from Qaraqosh in October 2016, life has not returned to its once-vibrant and wealthy neighbohoods. (AFP)
AFP, Qaraqosh, Iraq Wednesday, 29 March 2017

In the Iraqi Christian town of Qaraqosh, time stands still. The ISIS group was expelled in October 2016, but life has not returned to its once-vibrant and wealthy neighborhoods.

It has a ghostly air: wide avenues silent but for the rattle of an empty tin can nudged by the breeze or dead leaves rustling in front gardens abandoned by residents.

The town sits on a main route from the city of Arbil, so cars occasionally speed through, but few people stop any more. AFP reporters visited the town several times in March, speaking to residents earlier in the month and returning to its empty streets in recent days.

Qaraqosh was ravaged by ISIS, who seized it in June 2014 as they rampaged across parts of northern Iraq, capturing second city Mosul and swathes of the area known as the Nineveh Plain, home to much of the county’s dwindling Christian minority.

The extremists worked to erase any signs of the faith from Qaraqosh.

They smashed icons, toppled church bell towers and systematically chiseled out the crucifixes that once adorned each panel of the outer wall of the Mar Bahnam wa Sara church.

House after house was torched or blown up, and the Mary al-Tahira church was defaced with the group’s flag and threats.

“Without the state of Islam, there will be no safety or peace in either Iraq or Syria,” read graffiti on the mottled marble of one pillar.

The church’s courtyard was used for target practice, and hundreds of bullet casings still sit in piles alongside sheet music for hymns.

The scene was heartbreaking for Aram Saqt, 24.

“My whole life was here and it was a happy life,” he told AFP. 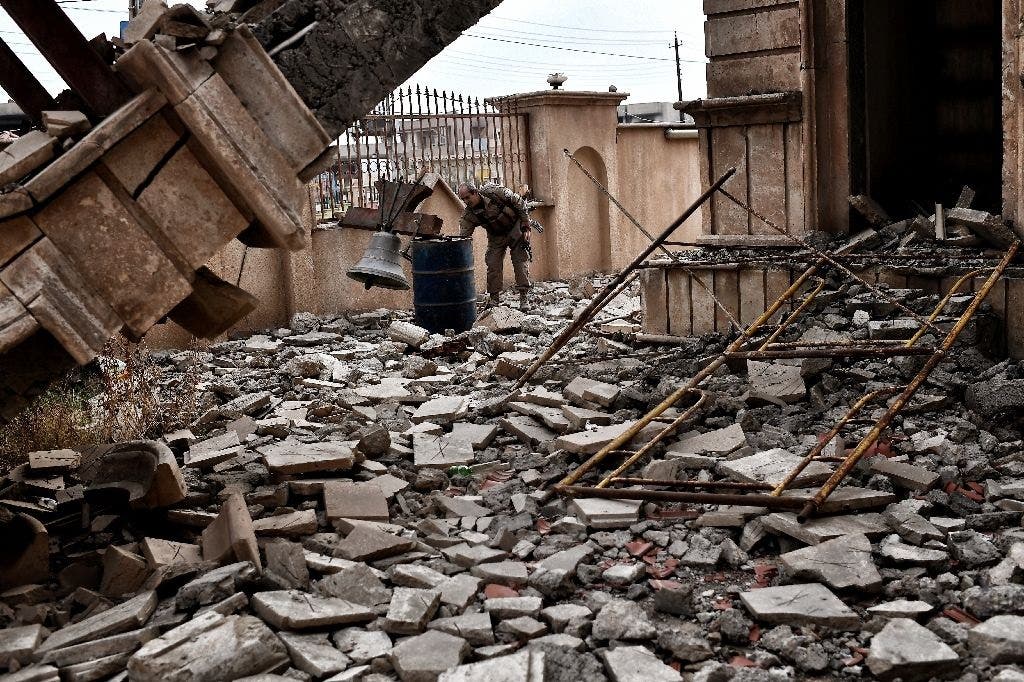 House after house in Qaraqosh was torched or blown up, and churches were destroyed or defaced with the ISIS flag and threats (AFP)

“My feelings are more than sadness, I can say I’m destroyed,” he added, walking through the scorched main hall of the Mary al-Tahira church and crossing himself at the altar.

“I want to cry, honestly. When you remember the life you had, and how it is now, it’s something very sad.”

Qaraqosh, also known as Hamdaniya or Bakhdida, was once one of Iraq’s most important Christian towns.

But now most people on its streets are, like Saqt, members of the Nineveh Plain Protection Units (NPU), a small Christian militia charged with protecting the town.

The fighters have little to do, beyond checking cars at the town’s entrance and exit, as the danger posed by ISIS recedes with the Iraqi government’s offensive against the group in nearby Mosul.

But if Qaraqosh is now safe, residents say returning remains impossible, with basic services yet to be restored and no way yet to repair their homes.

“Where could we go back to? There should be water, electricity, sewerage, safety,” shouted Imama Behnan, now living in nearby Arbil with her family. 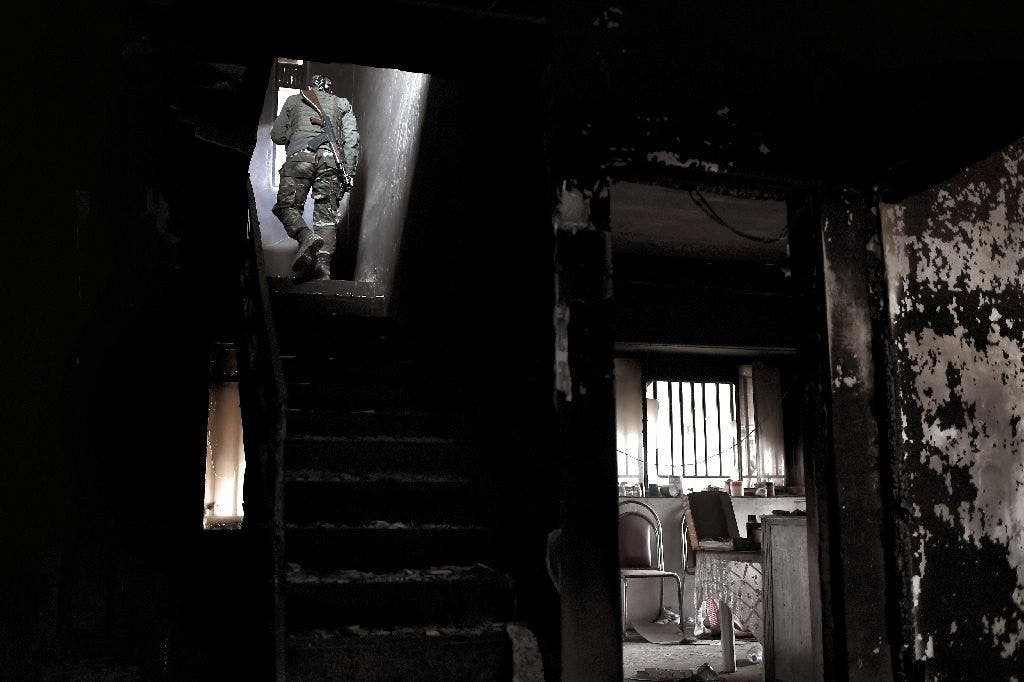 Qaraqosh may now be safe but residents say returning remains impossible, with basic services yet to be restored and no way yet to repair their homes (AFP)

“We waited for them to liberate it so we could go back, and now this is liberation,” she sighed.

When she left her house in 2014, she assumed the exile would be brief.

“I cleaned the house… closed it up and left. We thought it would be a day or two and we’d go back. Now it’s been three years,” she said, weeping.

Many Qaraqosh residents have given up, emigrating to Europe, the United States or Australia, but Behnan refused to join her daughter in The Netherlands.

She and others like her in Arbil receive some assistance from the church, whose leadership moved to the city with its flock.

But they still yearn for home.

“There was nowhere like Qaraqosh — even ISIS said they couldn’t believe it,” she laughed.

‘They don’t want us to return’

Qaraqosh’s emptiness reflects the challenge faced by Iraqi authorities in many towns and villages liberated from ISIS, but remain devoid of services and infrastructure and lacking reconstruction funds.

But Qaraqosh residents also allege they are trapped in a political dispute between Iraq’s autonomous Kurdish region and the country’s federal government.

They accuse Kurdish forces of preventing them from going home, and seeking to expand their control over the town.

“They don’t want Christians to return here, they want to control these areas,” said Jamil Salaheddin al-Jamil, a Qaraqosh native and NPU member.

“They want to take these areas because they’re areas that belong to the Christians and they are strategic areas between Arbil and Mosul.”

Such accusations are repeated by others, who accuse Kurdish forces of even preventing burials at the local graveyard.

But the deputy interior minister of the Kurdish regional government denied the charges.

“We hope that the displaced will return to their homes as soon as possible, and from our side we don’t put any obstacles in the way of their return,” Jalal Karim told AFP.

He acknowledged that some displaced could not return because of “bombs and mines laid in the areas”, but insisted that “we are helping (the displaced) and encouraging them to return”.

Residents feel they have no one to turn to, and Jamil has decided to emigrate to France, after years of advocating for a Christian presence in Iraq.

“I had hope and dreams, all of it, but I’ve had enough.

“Why should love for the nation go in only one direction?”
http://english.alarabiya.net/en/features/2017/03/29/Freed-from-ISIS-but-Iraq-s-Qaraqosh-is-now-a-ghost-town.html