There were multicolored plastic eggs filled with sweet jelly beans, eggs dipped in dye and Easter baskets stuffed with goodies.

And music. There was lots of music and dancing Saturday at a St. Joseph Chaldean Catholic Church hall in Troy during Breaking Barriers Spring Fling, an Easter-themed get-together for refugees and immigrants with special needs and their families.

Breaking Barriers, a program run through the Chaldean Community Foundation in Sterling Heights, holds events like this monthly, said Sue Kattula, who heads the program, which helps connect families with services.

Munir Ibrahim, through a translator, said the program helped get his daughter, 23-year-old Fatin Ibrahim, who has Down syndrome, into a special needs school and helped him navigate guardianship issues.

Rand Dallo, a case manager with Breaking Barriers providing translation, said Ibrahim said that his family came to the U.S. nine years ago from Iraq as asylum seekers and are now citizens. As Ibrahim’s daughter, wearing a dress for the occasion, enjoyed a slice of pizza, he said he was happy for get-togethers like the one Saturday, Dallo said.

From left, Moreen Marooki, 10, prepares to dip an egg in colored dye as her mother Karama Antto looks on, both of Warren, during the “Breaking Barriers Spring Event” on Saturday, March 18, 2017 at St. Joseph Chaldean Catholic Church in Troy.  (Photo: Rachel Woolf, Special to the Free Press)

Kattula said Breaking Barriers, started in 2012, holds a themed social event each month. They have included a summer picnic, a Hollywood-style dinner celebration and events centered on holidays, she said.

On Saturday, there were hundreds of eggs on hand ready to be dipped in dye, colorful baskets filled with treats like potato chips, candy and chocolate bunnies, yellow Peeps, decorating the tables and, of course, the music, which inevitably leads to dancing.

The dancing is what Sameerah Alqas-hanna said her son, 20-year-old Anas Hendi, who has Down syndrome, enjoys most.

Her family came to the U.S. nearly a year ago as refugees from Iraq, after first spending a year and seven months in Jordan, Dallo said, translating Alqas-hanna. He said her family has been coming to the Breaking Barriers events for months.

“We never miss one,” Dallo said Alqas-hanna said. “She said, ‘Because you look forward to this event.'” 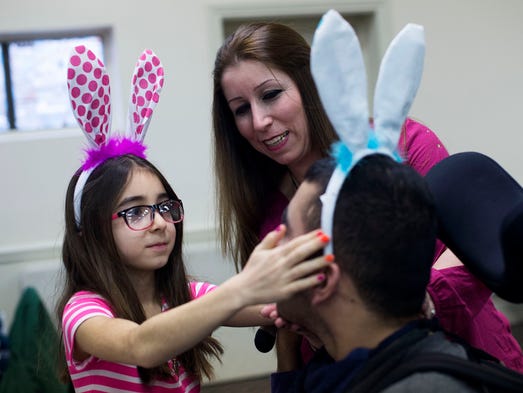 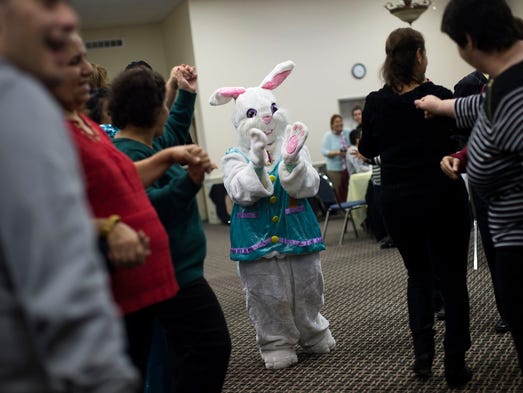