Ruth K’lama
Egypt (MNN) — A propaganda video has surfaced in Egypt, vowing to eradicate Egypt’s Coptic Christians.
President Abdel Fattah el-Sisi has already released the identity of the man behind the threat, 22-year-old student Mahmoud Shafik, also going under the name Abu Abdallah al-Masri. Is this a warning from ISIS?
(Image courtesy SAT-7)

SAT-7’s Founder and CEO Terry Ascott demurs, “We’re not completely sure it is ISIS. A lot of people claim to be affiliated with ISIS and may be inspired by ISIS, but in this particular case, we’ve got a shocking attack that took place in December that killed a number of Copts. They’re sort of building on the resulting consequent fear by saying they’re going to displace the Copts.” Ascott is referencing the December 11th suicide bomber who killed himself at a church in Cairo, as well as at least two dozen others, mostly women and children.

Although the video promised a campaign to liberate Cairo of all Christians, Ascott says it isn’t a realistic threat. “To put it into perspective, there are at least eight million, if not more, Coptic Orthodox Christians in Egypt. And, in fact, the Christians in Egypt represent almost half of the Christians in the Middle East. This is a very idle threat from an organization that is being displaced from Iraq.”

Consider this, too — the government is very hostile to ISIS in Egypt, says Ascott, adding that the people don’t even appear willing to tolerate the more moderate Muslim Brotherhood.  “They’re not going to welcome ISIS or ISIS sympathizers in Cairo.  This whole idea of them (ISIS) displacing the Coptic Orthodox Church or any Christians in Egypt that have been there since the time of the apostles is just silly.” 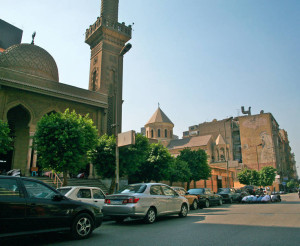 However, ISIS violence can’t be dismissed out of hand.  They’ve shown a willingness to make examples of anyone, in any manner, at any time.  Additionally, Christians do face discrimination and harassment at increasing levels.  However, that’s partly why SAT-7, a Christian satellite television ministry to the Middle East and North Africa, exists.

It also allows the community a space to talk about big issues.  “We’ve also had a number of dialogue programs where we’ve invited in religious leaders from all religions to discuss areas of common concern and interest.  This, again, shows respect, mutual respect and a commonality we have as human beings in the Arab world and in the Middle East, in general.” 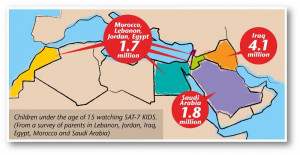 SAT-7 uses all of their programming to make God’s love visible.  The result, muses Ascott, is that, “I think what we’ve managed to do is to kind of humanize Christians in the eyes of many who have demonized Christians across the region.  This has improved, generally, the attitudes of Muslims to Christians.”

Plus, biblical values are incorporated into the shows.  One example is SAT-7 KIDS, where, “…if younger members of the family really like this kind of programming and parents begin to see it has a positive impact on their kids and they’re learning good values and attitudes and they’re more at peace with themselves, then this is a real door opener.”

Then, with the huge displacement of Syrian refugees, education has become a felt need.  A whole generation has missed out on education and many of the Syrian refugee children have trouble getting into schools.  SAT-7 has a response to that, too, says Ascott.  “I think a new channel we’re going to launch later this year, called SAT-7 ACADEMY, is really just about providing education and teaching people how to learn, and supporting teachers and parents in their efforts to help their children learn.  These are all things that are going to help make a dent in the problem.”

It’s just plain exciting to see what kinds of opportunities are afforded to SAT-7 in a creative access region.  As a voice of hope, there are endless possibilities.  But with increasing pressure on Christians, isolation and discouragement is part of the landscape, too.  Ascott says, “We need to work with them, we need to encourage them.  We need, from the West, to pray for them, and to support the different ministries that both encourage and support the Church and help them in their outreach.”

Pray on behalf of those facing economic and social challenges because of their Christian faith.  Ask the Lord to provide for their spiritual and practical needs — further strengthening and emboldening them so they can effectively share biblical truth with others in their communities.  May the hearts of those who hear it be open and receptive to the wonderful truths contained in God’s Word.