Rikar Hussein
An Iraqi Christian who lives in Lebanon holds a placard during a sit-in, in front of the United Nations Headquarters demanding speeding up their immigration cases in Beirut, Lebanon, Feb. 13, 2017.
Hind Safaa has returned to her hometown of Qaraqosh in northern Iraq after Islamic State fighters were pushed out of the town. She and her family left the area two years ago due to fears that Islamic State fighters will target them as religious minorities.

Safaa was shocked to witness the destruction and ruins brought upon a town she once called home. Her house where she spent her entire childhood was destroyed.

“I can’t describe how I really feel. All of these pieces that have been thrown and destroyed carry beautiful memories,” Safaa said. “These are things that mom and dad worked very hard to build.”

Safaa, her parents and siblings were lucky to have left the town in August 2014 two hours before Islamic State took over. Some in town weren’t as lucky.

Before IS attacked Qaraqosh, Safaa was going to Mosul’s College of Medicine and dreamed of becoming a doctor.

Her family left everything behind, taking refuge in the relatively safer Kurdistan region in northern Iraq.

Saffa told VOA that militants have taken whatever they could and destroyed the rest.

“In every room, there were shattered parts of furniture, broken plates and torn clothes making it hard to walk through the house,” Saffa said. “It was so messy because IS fighters were planning to burn the house, but for some reasons they didn’t.”

Saffa added that IS burned hundreds of other houses that belonged to Christian minorities in the area, including the tall church of St. Mary al-Tahira.

“IS graffiti has been smeared on its [church] walls, the nave is scorched black by fire and the altar has been vandalized,” Saffa said.

St. Mary al-Tahira church was once Iraq’s largest Christian church, and about 3,000 people attended the church every Sunday. Its symbolic significance for Iraqi Christians explains why hundreds of residents rushed back to the town to re-establish the church in late 2016. 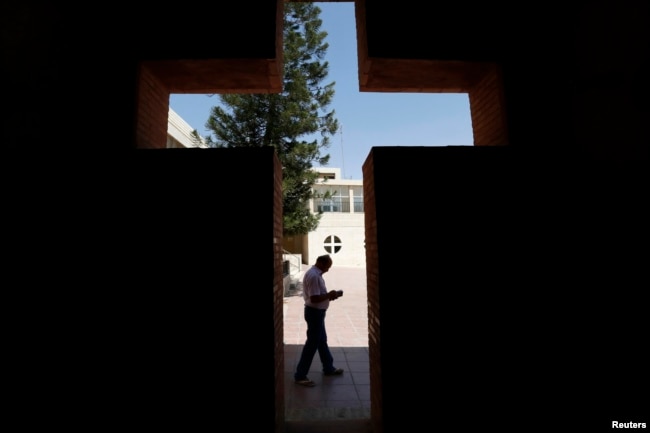 FILE – An Iraqi Christian man from Mosul, who fled with his family from violence in their country, reads a book at the Latin Patriarchate Church in Amman, Jordan, Aug. 21, 2014.

But things for many Christians including Saffa are not the same anymore. The rebirth of the Christian community in Qaraqosh and the rest of Iraq seems difficult as most Christians who fled the town refuse to return, and instead are embarking on journeys to settle abroad.

IS blow to coexistence

The mass Christian departure from Iraq has made the future survivability of the church uncertain in a region where Muslims and Christians have lived as neighbors for centuries.

IS not only targeted minority Christians, but also broke societal fabrics in Iraq.

She and her entire family are attempting to leave Iraq and join their community diaspora in Europe.

Migration to the West for her is not only an attempt to find safety, but also a door for opportunities.

“Two of my friends who moved to France are now preparing to study medicine. And my high school friend, Maryana, has become a great photographer there,” Safaa said.

Maryana Habash, Safaa’s friend from high school, left with her family the night IS attacked Qaraqosh as well.

“The situation was so complicated that night that I didn’t even know where some of my family members were,” Habash told VOA. “I could think about anything but how to find a safe place for my two little sisters.”

Habash and her family took political asylum in France in early 2016. She now lives in Riems, France and began school.

Just like her friend Safaa, Habash, too, thinks Qaraqosh is in her past now.

“I might want to travel there at some point in the future, but I will never live there again. The values of human rights are non-existent in Iraq,” Habash said.

Habash says eight more families from Qaraqosh also are settled in Riems, France, and more are on the way, suggesting that Riems will become their new Qaraqosh in the future.

Mass Christian immigration from Iraq is undermining the efforts of Christian leaders who want to establish an autonomous region for Christians in northern Iraq with Qaraqosh as its capital. 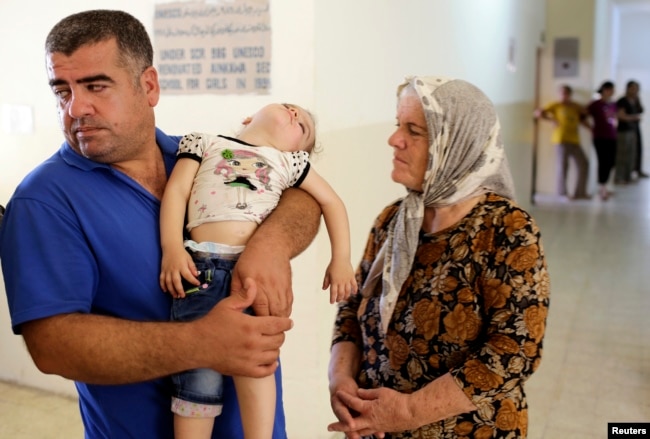 FILE – Iraqi Christians, who fled violence brought by Islamic State militants in the village of Qaraqosh, seek refuge inside a church building in Irbil, north of Baghdad, Aug. 11, 2014.

“Continued mass migration of our people to the West is the greatest danger to our existence as a religious minority in Iraq,” said Romeo Hakari, who heads the Bait-al-Nahrain, Assyrian Christian political party in Iraq.

There is no official data about how many Christians live in Iraq, but it is estimated that more than 1.5 million Christians lived in Iraq before 2003.

According to Iraqi Christian Relief Council, a non-profit organization that advocates for Christian minorities in the country, sectarian violence following the U.S.-led invasion of Iraq and systematic targeting of religious minorities by IS and other militant groups have forced approximately 80 percent of the Christian population to leave the country.

Hakari of the Baitl-al-Nahrain political party puts part of the blame for mass Christian immigration from Iraq on the West for encouraging people to settle in Europe and elsewhere.

“European embassies in Iraq, especially the French and German embassies, have facilitated the migration of our people,” Hakari said

Western countries have shown more willingness to accept Iraqi Christian and Yazidis, citing continued IS persecution of these groups as a justification. Earlier this year, an official from the U.S. State Department told VOA that the U.S government and Canada were working to permanently resettle hundreds of Yazidis and Christians from Iraq.

Iraqi Christian leaders are continuously meeting with the U.S. and European officials to discourage such programs, Hakari told VOA.

“Western countries can play a major role in providing us with assistance to rebuild our homes and defend ourselves in an autonomous region,” he added.

But for many Christians like Safaa returning is not an option.

“With time we have realized that it doesn’t matter where we live and what system is in place. What really matters is the people around us.”