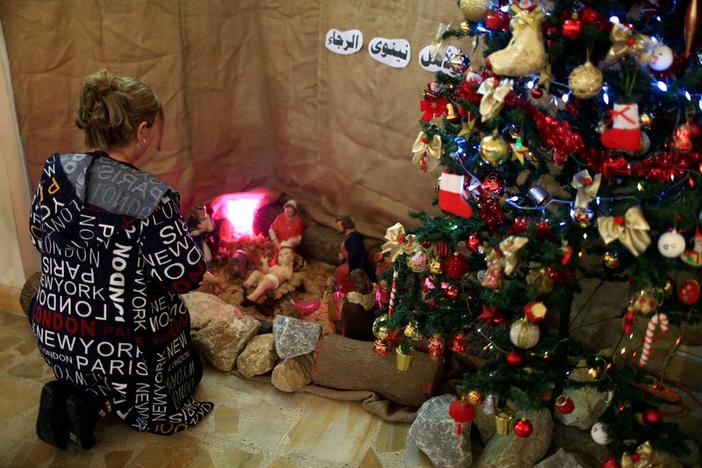 An Iraqi Christian woman prays during a mass on Christmas at St. Joseph Chaldean church in Baghdad, Iraq December 25, 2016. REUTERS/Thaier Al-Sudani
Christians in Baghdad celebrated Christmas on Sunday in a heightened state of fear after deadly attacks on Christian-owned shops that sell alcohol.

Two shops next door to each other were riddled with bullet holes and spattered with blood after gunmen opened fire late on Friday in Baghdad’s Ghadeer neighborhood. Police and medical sources said three people were killed and four wounded.

Local activists gave a higher death toll. Rayan al-Kildani, commander of Babiliyon Brigades, a group of Christian volunteers formed to fight Islamic State militants, said eight Christians and one member of the Yazidi sect had been killed in the attack.

“What a bloody gift they gave us for Christmas,” Joseph Warda, a Christian human rights activist, told Reuters.

Maria Polos, a retired schoolteacher in the district where the attack took place, said she and other Christians were afraid to celebrate the holiday in public.

“We fear getting killed like those in the alcohol shops,” she said. “We feel we’re aliens in this country.”

The sale of alcohol is generally shunned among Iraq’s Shi’ite and Sunni Muslims, and Christian-run shops that sell it were frequently targeted by militants from both Muslim sects during Iraq’s years of sectarian civil war.

This year, government forces have been pushing fighters from the militant group Islamic State out of parts of northern Iraq where it had banned the practice of any religion apart from Sunni Islam.

Areas once held by the group have seen their first Christmas services since 2013, and many Christians there have sounded more hopeful than they have for years about the fate of communities that date back to biblical times.

In Baghdad, the capital which is firmly controlled by the Iraqi government and security forces dominated by Iraq’s Shi’ite majority, Christians celebrate Christmas in churches decorated for the holiday. But many say they still live in fear, and do not feel the authorities protect them adequately.

Although the identities of the attackers who struck the liquor store were not known, the area is predominantly Shi’ite and Shi’ite groups have firm control of security. Warda, the human rights activist, said militants from any sect that attacked civilians in the name of religion were “no better than Islamic State”.

Vian Dakhil, a lawmaker from the ancient Yazidi sect, whose members were targeted in northern Iraq by Islamic State for what Western countries described as genocide, also said one Yazidi and eight Christians were killed in the Baghdad attacks.

“The criminals should be brought to justice as soon as possible so that their punishment serves as an example to those who dare kill civilians in the name of religion,” Dakhil said on her Twitter page.