By Hugh Sykes BBC News, Irbil
A consecration mass was conducted in Chaldean, a language related to Aramaic
“When you treat a cancer, you have to use unfortunate measures,” said Bashar Warda, Chaldean Catholic archbishop of Irbil, when I asked him if it was right to kill members of the so-called Islamic State (IS).

“They consider us blasphemers and infidels,” he went on, “when they refuse to negotiate, refuse dialogue, refuse your right to exist – when they don’t consider you as a human being, and try to terminate you. What other option do you have to eliminate their violence?”

There was applause and ululating in the cathedral church of St Joseph in Irbil when Archbishop Bashar made the same argument at a mass of consecration at the cathedral after extensive renovation and modernisation.

More than 1,000 Iraqi Christians attended the mass, which was a superbly rehearsed and performed piece of Catholic theatre.

There was sublime chanting from a choir of men and women in smart cream uniforms. 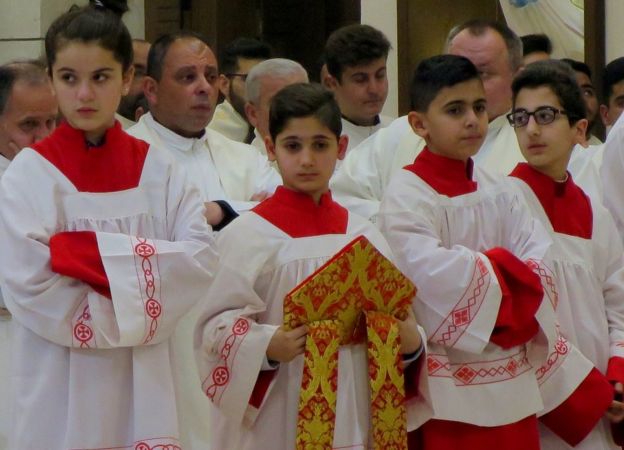 Altar boys and girls in red and white vestments attended the archbishop as he conducted the mass.

The air soon grew thick with smoke from incense burning in a censer swung by a priest at the head of a procession of priests in white, led by one holding a staff with a silver crucifix at its top.

The language of the mass is Chaldean, which is related to Aramaic – the language spoken in the Middle East at the time of Christ.

The congregation spoke the Lord’s Prayer in Chaldean.

The church has new murals decorated in red and gold, depicting the baby Jesus with Joseph and Mary.

Mary – Mariam in Arabic – is a particular figure worshipped here. Jesus is also venerated in Islam, and she as his mother.

Indeed, there were several Muslims in the congregation. 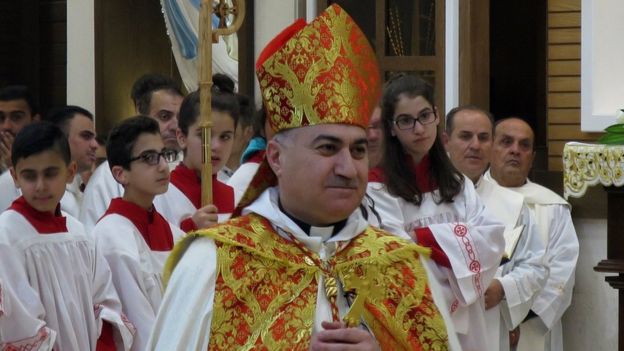 I first met Bashar Warda 11 years ago, when he was a parish priest in Baghdad, at the Church of St Ilya, right next to a Shia mosque.

Muslim women were praying at a statue of the Virgin Mary in the church courtyard.

Father Bashar showed me his primary school, for more than 400 Christian – and Muslim – children (60% and 40% respectively).

There was no religious instruction, he told me, “just to learn to live together, study together, accepting each other.”

Father Bashar concluded his remarks with “it’s the Iraqi way of living together.” That was in 2005.

The violent years that followed profoundly undermined that Iraqi way. 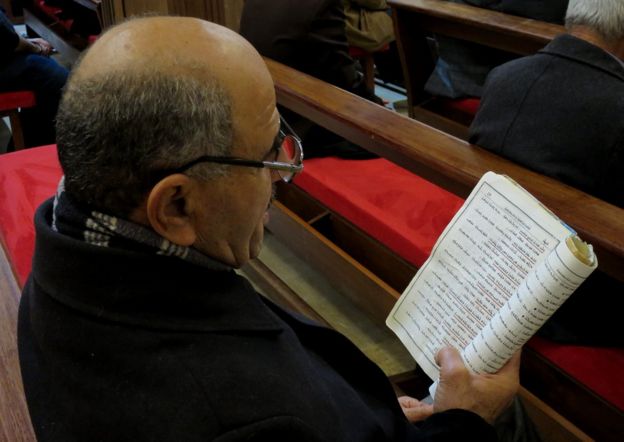 How big is the Christian community in Iraq?

Several priests have been killed – one beheaded and dismembered. A previous archbishop of Mosul died after being kidnapped, and a priest in Baghdad was kidnapped and released only when a ransom was paid.

Dozens of Christians have died in bomb attacks on their churches during Mass.

Al-Qaeda in Iraq and its successor, IS, have killed hundreds of Christians, and menaced many more out of their homes.

But this Christmas coincides with some relief, at last, for thousands of Iraqi Christians.

Several of their towns and villages around Mosul have been liberated from occupation by the violent and uncompromising religious zealots of IS. 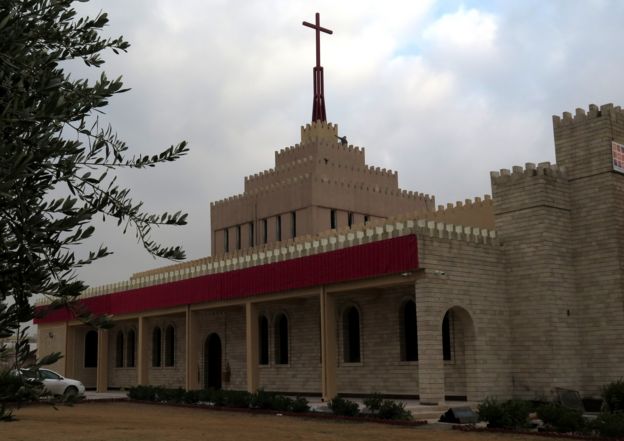 The new altar in St Joseph’s contains pieces of broken stone which Archbishop Bashar recovered from the altars of two churches that IS destroyed in two Christian villages near Mosul.

The mass of consecration in Irbil was followed by fireworks, a cake baked in the shape of the church with its new red cross on top – and the choir singing a wistful, nostalgic song – Auld Lang Syne – In Arabic.

But the same tune, and the same words and meaning, “times gone by”.

One of its lines is: “Our voices all combine in sweet accord to thank our Lord.”

Listen to Hugh’s report from Irbil