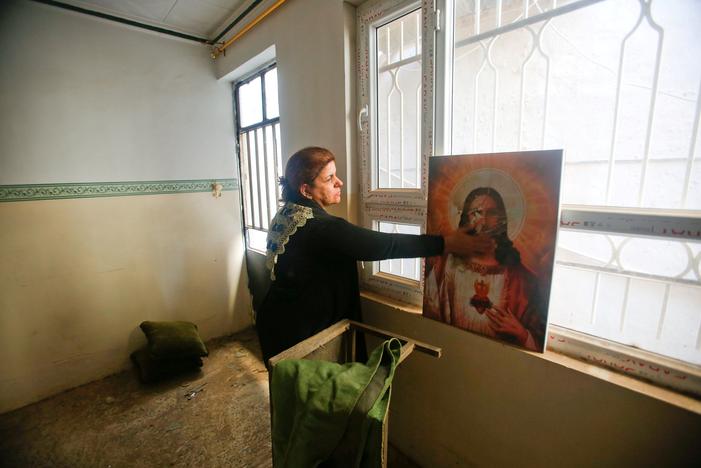 FILE PHOTO – A Christian woman inspects a home in the town of Bartella east of Mosul, Iraq, after it was liberated from Islamic State militants November 23, 2016. REUTERS/Khalid al Mousily
By Isabel Coles | QARAQOSH, Iraq
A strip of negatives lying in the rubble of a home in northern Iraq contains snapshots of life as it was before Islamic State overran the area two years ago and purged its Christian community.

In some of the frames, a woman barbecues meat on a skewer surrounded by friends or family, perhaps celebrating a birthday or engagement. Others show a man scaling a ladder propped against the wall of a house under construction.

Those images stand in contrast to the devastation that is now Qaraqosh – Iraq’s biggest Christian settlement before militants took over in 2014 and issued an ultimatum to residents: pay a tax, convert to Islam, or die.

Most of its population of 50,000 fled – the latest chapter of a history that dates back two millennia to the start of Christianity in Iraq and which has become increasingly beleaguered over the past decade.

Iraqi forces retook Qaraqosh about a month ago in the early stages of their campaign to drive Islamic State out of Mosul and terminate the group’s self-styled caliphate, but it may be too late to reverse the decline of Iraq’s Christian minority.

Displaced residents venturing back to assess the damage say they will not live in Qaraqosh again unless they get compensation and guarantees of protection from the international community.

A few are being brought back in coffins to be buried beneath their home town, spared the sight of destruction.

Qaraqosh has been ransacked by the militants, who stole everything of value – televisions, washing machines, fridges – to distribute to their followers or sell for profit.

Some houses have been torched, either to create a smokescreen against coalition aircraft bombing Islamic State in support of Iraqi forces, or apparently out of spite.

“It’s worse than we expected,” said teacher Wisam Rafou Poli, trying to exorcise the militants who occupied his house by emptying its entire contents onto the street to be burned.

Amongst the debris was a militant’s underwear and the lid of a box of ammunition for 120mm mortars labeled: “The state of the caliphate. Committee for military development and manufacture; department of explosives.”

“I cried when we entered the house,” said his wife Zeena, comforting their young daughter, who was mourning her favorite doll, found filthy and ripped.

Nearby, Saad Behnam Batous found his home had been turned into a bomb factory.

A chemical smell pervades the house and in the living room were ingredients for making explosive devices: buckets of fertilizer ground to a fine powder and a saucepan full of door hinges, presumably for use as shrapnel.

In every house, the contents of wardrobes and drawers are dumped on the floor – evidence of the militants’ search for hidden valuables.

They did not find the 12 million dinars ($10,000) that Kheder Abada buried in a pile of earth on the roof of his home before fleeing, but the elements did, reducing his savings to a worthless pulp.

The plasma screen for which Abu Maryam paid $1,600 is gone, but the militants left his old television behind, sitting on a table exactly where it was when he abandoned the town that August night in 2014.

Asked how he felt when he saw his house again, words failed him and a lump rose visibly in throat: “Rage,” he managed eventually. One of his sons made the perilous and illegal journey by boat to Europe this year and is living in Germany, having lost hope in Iraq.
Also In World News

In the years after Saddam fell, Christians became a target for insurgents, and many sought refuge in Qaraqosh including Dhia Roufa, who used to live in Mosul but fled when militants threatened to kidnap his daughter in 2006.

Even if it were safe to return to Qaraqosh, Roufa and others said they did not have the means to rebuild because their livelihoods are destroyed and their savings spent.

“I am 64 years old. If I were young I could start again, but at this age what can I do?” Roufa said. “We (Christians) have no future in Iraq.”

Makeshift wooden crosses have been raised above Qaraqosh’s churches, replacing those torn down by Islamic State.

In one church, a statue of Jesus remains, but has been decapitated. Pages from bibles in Aramaic – the language spoken by Jesus – litter the floor.

The shutters of shops on the main street have been daubed with Islamic State slogans and signed by fighters whose names indicate some came from Dagestan and Chechnya.

Written in red on the wall of a plundered electrical shop are the words: “By God, we will break your cross”.