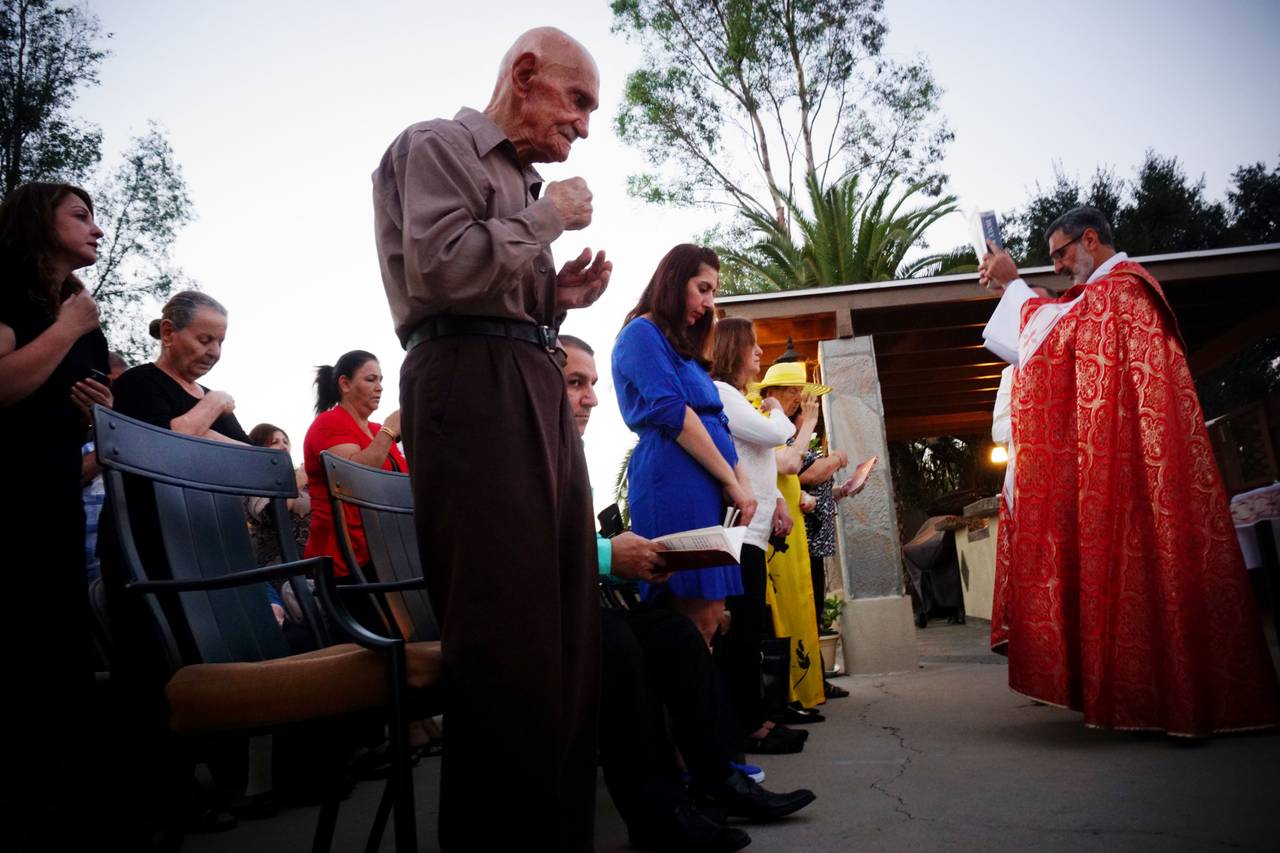 In opposition to church officials, some Iraqis in the U.S. have been helping Christians escape Iraq
Father Noel Gorgis celebrates Mass at a home in El Cajon, Calif., in late August. Father Gorgis has been trying to get more Iraqi Christians, known as Chaldeans, in the U.S., and was expelled from his post at the church in July. Photo: Sandy Huffaker for The Wall Street Journal
By Ian Lovett

The priest, an Iraqi immigrant, had been kicked out of the local church. Parishioners had been warned by local church leaders not to worship with him. Yet 50 people sat in makeshift pews behind a home east of San Diego in a show of opposition to church officials urging Christians to stay in Iraq, where their numbers are dwindling.

“There is no future for Christians in Iraq,” said Bahaa Gandor, a 31-year-old who fled the country in 2010. “We have to bring them here.”
–– ADVERTISEMENT ––

The Chaldean Catholic Church, a nearly 2,000-year-old branch of Christianity based in Iraq, is at war with itself over how to ensure its survival. And the dispute is threatening to fracture this ancient faith.

Some Chaldeans in the U.S. have been scrambling to help Christians escape Iraq, where they are being targeted and killed by Islamic State. But that work has put them in conflict with top church officials in Baghdad who say Chaldeans must stay and help preserve Christianity in the Middle East.

Tensions between Baghdad and the Chaldean diaspora have reached a breaking point in El Cajon, where many Chaldeans have settled.

Father Noel Gorgis, a priest who has spent much of the past two years lobbying the U.S. to accept more Iraqi Christian refugees, was expelled from his post at the church here in July. A longtime bishop, another advocate for Iraqi refugees, has also been forced to retire.

The changes have rocked the large Chaldean community in El Cajon, and some here have entered a quiet revolt against church hierarchy.

They have begun holding what they call “underground Masses” with Father Gorgis at homes in the area. Some are even floating the possibility of starting their own church, based in the U.S., where they say they are better able to preserve their language and their culture than in Iraq.

“What’s our relationship with Iraq? We’re American,” said Father Gorgis, who fled Iraq in the early 1990s during the Gulf War. “We can have our own church here.”

He quickly added: “That’s not our goal. We want to keep our heritage.”

Since the U.S. invaded Iraq in 2003, the Chaldean population has been steadily shifting away from its homeland. There are now around 400,000 Christians in Iraq, down from 1.4 million in before the invasion, according to church officials. Secretary of State John Kerry has called the attacks on Christians in Iraq genocide.

Meanwhile, the Chaldean population in the U.S. has ballooned to more than 250,000, mostly around Detroit and San Diego. 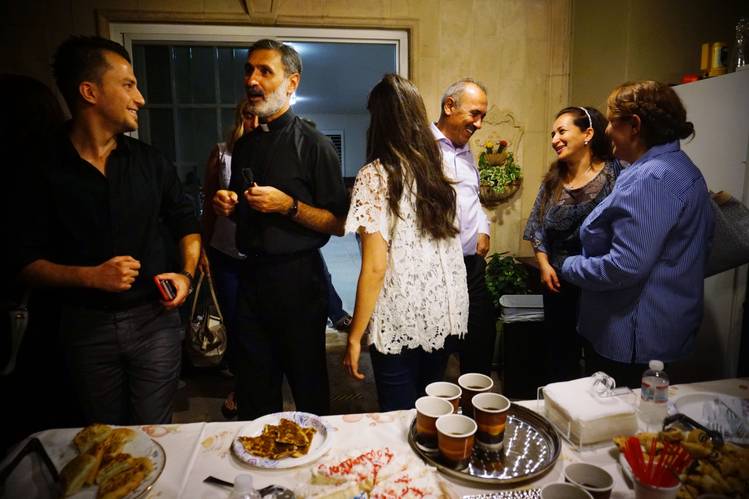 ENLARGE
Father Gorgis, second from the left, speaks with worshipers after Mass. Photo: Sandy Huffaker for The Wall Street Journal

The exodus has been a growing concern for Patriarch Louis Raphaël I Sako, the leader of the Chaldean church, an Eastern Rite Catholic Church that answers to the pope in Rome.

“This is our land,” he said in an email to The Wall Street Journal from Iraq. “If we leave, everything will leave with us, and little by little will be dissolved [by] assimilation in new societies.”

In a letter to bishops in May, which was obtained by the Journal, Patriarch Sako wrote, “Priests should not be allowed to give any official statements encouraging other priests to immigrate.”

“We must sacrifice a few priests in order to maintain the rest,” he wrote. “We are already running short on priests.”

He said via email that Father Gorgis has been removed because he criticized his superiors and the church itself.

Father Gorgis’s supporters said the real reason he was dismissed from the church is clear.

“It was about the refugees,” said Mark Arabo, an activist in the Chaldean community here who worked with Father Gorgis on obtaining visas for Iraqi Christians, through their organization Minority Humanitarian Foundation, a non-profit advocacy group for Christian refugees. “It was because of his help for the most vulnerable in Iraq.”

In recent months, Masses at the St. Peter Chaldean Catholic Cathedral here are still mostly full, but frustration is widespread, said Father Michael J. Bazzi, who remains at the church.

Father Gorgis has become a symbol of that frustration with Baghdad, which also has imposed changes to the liturgy at the church here.

The recent service in Father Gorgis’s backyard largely resembled a traditional Chaldean Mass: He spoke in a dialect of Aramaic, a language that Chaldeans have used for two millennia, and offered communion using wafers that someone had pilfered from the church.

Wasan Jarbo, who left Iraq 40 years ago, said she didn’t want to break with the Chaldean church in Iraq—and has continued to also attend Mass at the cathedral—but wouldn’t rule out a split.

“Here is where we have to preserve our identity, our liturgy, our language,” Ms. Jarbo, 56, said, adding that the Chaldean community had started a language school, seminary and monastery here. “I love my country, but we cannot practice our faith freely there. There’s a genocide.”

Still, pieces of Americana were apparent at Father Gorgis’s Mass. The younger attendees chatted in English before the service—not all of the second-generation immigrants could speak Aramaic. Bible verses were read in English, as well. A refrigerator was stocked with cans of Budweiser that had “America” emblazoned across them.

Michael O. Emerson, a sociology professor at Rice University who studies religion and ethnicity, said distinctive religious practice can be maintained in diaspora. But the traditions shift—and language fades—in a new environment.

“Religion and culture are so impacted by the surroundings,” he said. “By the third generation, it’s just so hard to preserve what it was like it in a different environment.”

Bishop Ibrahim N. Ibrahim, a retired Chaldean bishop based in the Detroit area, has sometimes acted as a spokesman for Patriarch Sako in the U.S., including on the importance of maintaining Christendom in Iraq. But Bishop Ibrahim now believes Chaldeans can survive only in the U.S.

“Even the Chaldeans in Iraq feel it,” he said. “If we’re saying it, it’s because we hear it from them.”