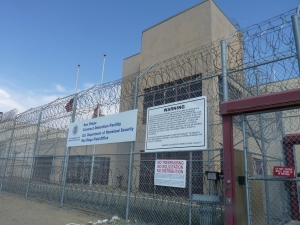 Private immigration prisons are used to hold people seeking asylum in the U.S. after fleeing violence or persecution, in addition to holding those awaiting deportation and criminals. These include the immigration detention center at Otay Mesa run by Corrections Corporation of America (CCA), a company made infamous by an undercover reporter for Mother Jones magazine who exposed horrific abuses including CCA neglecting prisoners’ medical care, throwing prisoners into solitary confinement without cause, violence in the prison and more.

Back in 2011, for our “Alone in a strange land” article on African asylees, East County Magazine interviewed asylum-seekers who had been detained at the CCA facility in Otay and other detention facilities, as well as nonprofit workers helping those granted asylum.

Aisha fled trauma in Somalia and endured robbery along her journey to America. Arriving at the border, she asked for asylum. But instead of freedom, she was put into the CCA private prison at Otay. She spent nine months in the detention center, before being granted asylum here. The same thing happened to Najimo, who was there for 10 months before finally being free to get an education. She was provided no schooling or even English language classes during those nine months behind bars.

Other countries such as Canada detain asylum speakers only briefly, for a week or two, to run a security check, then put an ankle bracelet on and release them until their asylum hearing.

Yusef, a Muslim man, told ECM that a government run facility in El Centro had better food and respected the needs of Muslims better than the CCA facility at Otay, where he was later transferred, however he said CCA provided medical care that yet another government facility in Lancaster had denied him for four months.

In other places, private prisons have been accused of denying prisoners medical care, even causing one prisoner to lose his legs. Yusef’s story shows that treatment varied widely by individual and facility.

However, when Yusef was finally granted asylum and ordered released, he said CCA dumped him on the streets of San Diego with only 88 cents in his pocket. “I didn’t know anybody,” he said. He finally got help from a Mexican man he’d met in detention who, after release, took him to his own home and later helped him find Somali Family Services.

Dory Beatrice with Survivors of Torture told us that the CCA facility at Otay sparks traumatic memories for detainees who fled war, since it is next to a shooting range and the detainees hear frequent gunshots. ”No one had told them what it was, and that they weren’t going to be attacked.”

CCA and Homeland Security refused to respond to our questions and record requests as we sought to learn how many detainees were dumped on the streets at night (to avoid CCA having to pay for a bed for an extra night, as some sources alleged was regularly occurring).

Ahmed Sahid with Somali Family Services told ECM back in 2012 that he suspected a profit motive behind the long detentions. “CCA, Corrections Corporation of America, this is a privately run for-profit corporation. The more people they have, the more time they have, the more money they make,” he told us. He added that asylum seekers here were put in with criminals.

In 2015, ECM covered a prayer vigil by local Iraqi Christians outside the Otay immigration detention facility. They were seeking release of family members who had been held up to six months, all seeking asylum after fleeing ISIS terrorists in Iraq. One woman who came from around the world pleaded to see her ailing mother, who died at Grossmont Hospital without that wish being granted. She was later ordered deported.

Mark Arabo, a leader in the Chaldean-American community, called the detentions of the asylees “shameful.” Gesturing to the walls with barbed wire, he said, “That’s not what America stands for. The statue of liberty is what we stand for – not a barbed wall.”

Amnesty International, in a reported titled “Treated as Criminals: Arbitrary detention of asylum speakers,” has stated that while seeking asylum is not a crime, “an increasing number of people, having been forced to flee their homes to escape persecution, are being placed behind bars in on arrival in the USA. They are held in conditions that are sometimes inhuman and degrading. Asylum-seekers in the US are liable to be stripped, shackled, and sometimes verbally or physically abused. Some are confined with convicted criminals…. but unlike criminals—are excluded from bail and have no idea when they will be released.”

Such U.S. policies and treatment resulting in indefinite detention of those seeking asylum “violate international human rights standards,” Amnesty International charged in the report. The group called on U.S. authorities to assure that asylum-seekers are detained only when a legitimate reason is demonstrated and then only for a minimal period. “Children should neither be separated from their families nor detained,” the report added.

The United Nations High Commissioner for Refugees’ Executive Committee (EXCOM) says detention of asylum seekers should normally be avoided and is allowed only to verify identity, claims on which asylum is based, deal with fraudulent or missing documents, and protect national security.

Sean Riordan with the American Civil Liberties Union told ECM during a 2012 investigation of asylum seekers’ treatment by the U.S. that there are alternatives, such as “supervised and electronically monitored release and the posting of bonds as people do in the criminal context.” Pilot studies showed electronic monitoring was effective and that asylum seekers were highly motivated to show up for hearings, he told us. He added that 100% of those seeking asylum in the U.S. are now being thrown into detention facilities, often for a year or more.

Today the U.S. Immigration and Customs Enforcement (ICE) agency within Homeland Security holds over 60% of its 400,000 annual detainees at private facilities run by CCA and by the GEO Group. In 2014 they were also awarded contracts to hold mothers and children seeking asylum, raising even greater concerns over the impact on children put behind bars.

Since the announcements by the Justice Department and Homeland Security about scaling back use of private prisons and possibly detention facilities for immigrants, the stock of those private prison companies has dropped sharply, the Washington Post reports.

Senator Bernie Sanders and Congressman Raul Grijalva have urged DHS in a letter sent last week to end use of private corporations for immigrant detentions.

The government would have to either build more facilities and hire more immigration enforcement personnel after privatizing such services around 15 years ago, he said, or they will need to release some detainees.

That could be accomplished through use of ankle monitors for detainees unlikely to pose security risks, says Greg Chen with the American Immigration Lawyers Association, the Washington Post reports. He says, “The use of private detention is not necessary.”

Chen has called on President Barack Obama to take action to assure that federal contracts with private immigration detention facilities will be ended, without waiting for Homeland Security’s report. That report, according to Secretary Johnson, is to take into account “all factors” including cost. The report will be prepared by a Subcommittee of the Homeland Security Advisory Council to be chaired by Judge William Webster.

CCA has issued a statement saying the company is “proud of the quality and value of services we provide” adding that it has passed numerous government audits and inspections. GEO similarly noted that its immigration facilities are “highly rated and provide high-quality, cost-effective services in safe, secure and humane residential environments” that meet federals standards.