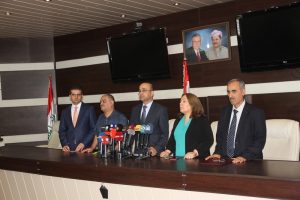 In the beginning of the press conference Dr. Khatab Shekhani, the general director of finance and administration of the Ministry discovered the purpose of the press conference and said, “This conference is specialized to announce the financial independency of the universities.” He also said that the project is one of the ministry’s projects. Dr. Khatab Shekhani explained more that during the past two years his country has faced financial crises and the universities have had a lion share in the crises.

In the press conference in which Dr. Nazhdat Akreyee, the general director of research and development chamber, Dr. Muhamad Sabir, the general director of planning and following, and Dr. Jwan Jalal, general director of cultural relationships and sending students to abroad were present, Dr. Khatab Shekhani, the general director of finance and administration of the Ministry discovered the other aspects of the project and said, “Our ministry has had bunches of projects to increase the quality of education and universities’ qualifications. One of the projects of our ministry which has been working on for years is the financial and administrational independency of universities because it is directly affect the universities’ qualities; so, from the beginning of 2016 and backed by attention of the Ministries’ Council and Ministry of Finance have started to prepare a project which would lead the universities to be more independent financially.

Dr. Khatab Shekhani also said, “The previous centralized system of finance which has been practicing for years cannot be changed in a day-night period. Then, hopefully, the suggestion was made by the Ministry’s Council and the final draft prepared and approved. Then, it was sent to the Ministries’ Council and there was accepted by the Government’s presidency and Ministries Council. Dr. Khatab Shekhani also explained that this project is the first step of financial independency of universities. In this regard, a group of income has been appointed. These incomes had gotten in various ways in the previous years and it would return to the government’s treasure. The significance of the project is from the point – backed by the 10th code of law of Ministry of Higher Education and Scientific Research -it has been organized again and the income of each university is counted in the university’s account, but the income of the Ministry is counted in an account which is called the Ministry of Higher Education account.

The general director of finance and administration explained more in that regard and said, “70% of Universities’ income is spent to the universities’ themselves till they are able to increase the qualities of education and management. In doing this, the universities do not need to go back to the ministry of finance anymore. So, this is an important step to the Ministry of Higher Education and Universities in which its effect upon their improvement will be seen in the next years. So, the control of spending, according to the instructions, those incomes has been given to ministry’s council and presidents.”

Dr. Khatab Shekhani also said, “This project vis-à-vis of the other projects of the ministry such as the national ranking of universities, direct application of students, establishment of development institute, PhD and master education reform process, and electronization system of management has been in action from the previous years. He emphasized more and said that the whole of those projects are on the way of making the universities more independent, because universities cannot be improved if they are not independent and developed. He also said that they belief in the universities independency because lack of independency makes them less developed. So, this project is the first step to financial independency. He also discovered that the project has accumulated a bunch of points in which near 60 sources of incomed has been appointed.
The general director explained that the majority of the points are not students relevant. Regarding the amount of money is taken from students as mortgage, Dr. Khatab Shekhani said, “In the previous years, there was 100,000 IQD was taken from student as mortgage to dorms.” He also said, “In the last two years there were so many problems faced dorms because of the financial crises. So, there were only three choices in front of us to better the dorms either to leave it to the private sectors, to close them, or to spend what was gotten from the dorms. The latter one was so weak because the money was too little while each student needs at least 250,000 IQD per month. So, the 100,000 IQD was taken from students for the entire year from the students and this was imbalanced.” Regarding the destiny of Hayat and Ishik Universities, the general director said, “Those two universities have faced financial crises. Hayat University’s problem has finalized and the 1st of Sept was the deadline to fix its problems. If they fix the problems, then they will be dealt legally, if not, the university will be put under the supervision of Ministry of Higher education and the students are not hurt. Ishik University has the same problem and we have asked them to fix their problems if not, we will take right decision regarding that, but still none of those universities’ destinies are clear. If any decision is made regarding their destinies, the benefit of students would be brought to the point of consideration and we don’t forget the universities’ negligence.

In another part of the press conference, Dr. Jwan Jalal Shareef, the general director of sending students to abroad and cultural relationships said, “The Ministry of Higher Education and Scientific Research has spent amount of money to the students who are studying in Russia under the program of HCDP and this is a good aid for those students especially in this situations and we will in continuing strife to spend all the financial rights of HCDP students.”

In the press conference also, Dr. Nazhdat Akreyee, the general director of research and development announced a great project of the Ministry of Higher Education and said, “For the first time there are announced around 3500 seats of master and PhD and will be announced in the next days in Kurdistan Region.” He also said that there are 1500 of the seats are sponsored by the KRG and the rest will be based on the parallel system and have done some easiness for age condition.

In another part of the press conference, Dr. Muhamad Sabir, the general director of plans and following said that to the more independency of universities and different from the last year, 102 of departments of scientific are applied directly to. Hopefully, the process has been done on the right truck and he said that they would be in strife to accept more students considering the quality of university. 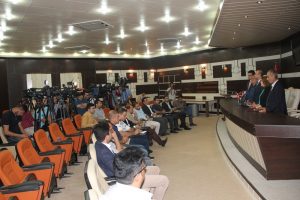 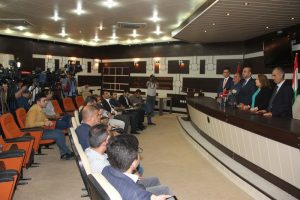 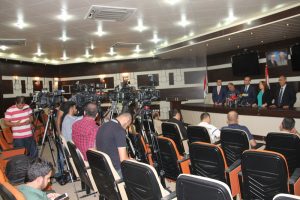 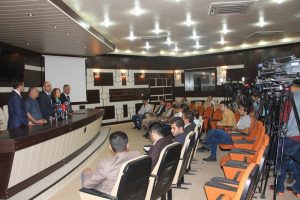 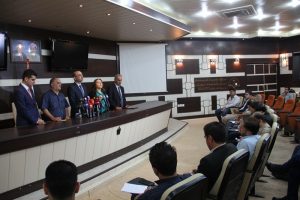 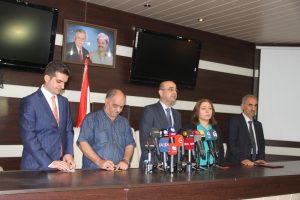