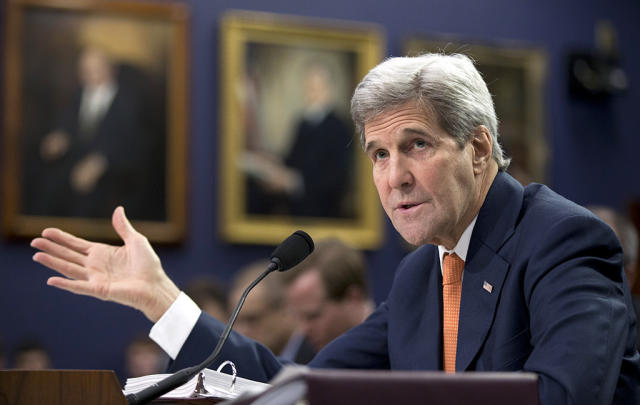 Secretary of State John Kerry signaled today that he plans to decide soon whether to formally accuse the Islamic State of genocide amid what sources describe as an intense debate within the Obama administration about how such adeclaration should be worded and what it might mean for U.S. strategy against the terrorist group.

“None of us have ever seen anything like it in our lifetimes,” Kerry said during a House subcommittee hearing Wednesday about beheadings and atrocities committed by the Islamic State.

But in response to questioning by Rep. Jeff Fortenberry, a Nebraska Republican who has been spearheading a resolution in Congress demanding the administration invoke an international treaty against genocide, Kerry was careful not to tip his hand on what has turned into a thorny internal legal debate with political and potentially military consequences.

Saying the department was reviewing “very carefully the legal standards and precedents” for a declaration of genocide against the Islamic State, Kerry added that he had received “initial recommendations” on the issue but had then asked for “further evaluations.”

In his first public comments on the issue, Kerry said he “will make a decision on this” as soon as he receives those evaluations. He didn’t elaborate on when that might occur.

The administration’s plans to invoke the powerfully evocative genocide label — an extremely rare move — was first reported by Yahoo News last November. But at the time, the State Department was focused on restricting the designation to the Islamic State’s mass killings, beheadings and enslavement of the Yazidis — a relatively small minority group of about 500,000 in northern Iraq that the terrorist group has vowed to wipe out on the grounds they are “devil worshipers.”

The disclosure set off a strong backlash among members of Congress and Christian groups who argued that Islamic State atrocities against Iraqi and Syrian Christians and other smaller minority groups also deserved the genocide label. Some conservatives even chastised the administration for displaying a “politically correct bias that views Christians … never as victims but always as Inquisition-style oppressors.”

The issue has since made its way into the presidential campaign; Sen. Marco Rubio has signed a Senate version of a House resolution, co-sponsored by Fortenberry and Rep. Anna Eshoo, for a broader genocide designation that incorporates Christians, Turkmen, Kurds and other groups. Hillary Clinton has also endorsed such as move. In response to a question from a voter at a New Hampshire town hall last December about whether she believes Christians as well as Yazidis should be declared victims of genocide, she said, “I will, because we now have enough evidence.”

But administration sources and others intimately familiar with the internal debate say the issue has proven more complicated. While ISIS has openly declared its intention of destroying the Yazidis, they argue, the terrorist group’s leaders have not made equally explicit statements about Christians even while committing killings, kidnappings, forced removals and the confiscation and destruction of churches aimed at Christian groups. As a result, administration officials and State Department lawyers have weighed labeling those acts “crimes against humanity” — a step that critics have said doesn’t go far enough. “We’ve been trying to tell them, crimes against humanity are not a bronze medal,” said one administration official, contending that it should not be viewed as a less serious designation.

Kerry seemed to hint as much in his responses to Fortenberry at Wednesday’s hearing, noting that Christians in Syria “and other places” have been forcibly removed from their homes. “There have been increased, forced evacuations,” he said. “No, its not — they are killing them in that case — but it’s a removal and a cleansing, ethnically and religiously, that is equally disturbing.”

At the same time, two sources familiar with the debate said, Pentagon officials have expressed concerns that a genocide designation would morally obligate the U.S. military to take steps — such as protecting endangered populations or using drones to identify enslaved women — that could divert resources from the campaign to defeat the Islamic State. (An administration official told Yahoo News Wednesday that any such concerns have not been raised in “interagency” discussions over the genocide issue. “There is no resource issue,” the official said.)

In fact, many legal scholars say, there is considerable debate about just what practical impact a genocide designation would have. It would be made under a loosely worded 1948 international treaty that compels signatory nations, including the United States, “to prevent and to punish” the “odious scourge” of genocide defined as acts “committed with intent to destroy, in whole or in part, a national, ethnical (sic), racial or religious group.” As documented by Samantha Power, now the U.S. ambassador to the United Nations, in her 2002 book, “A Problem from Hell,” President Clinton’s Secretary of State Warren Christopher, resisted labeling the mass murder of the Tutsis in Rwanda in 1994 as genocide for fear, as one State Department memo put it at the time, “it could commit [the U.S. government] to actually do something.”

But 10 years later, Secretary of State Colin Powell declared the killings of non-Arab people in Darfur to be genocide — the first time the U.S. invoked such a declaration during an ongoing conflict. But he did so only after receiving a secret State Department memo concluding the designation “has no immediate legal — as opposed to moral, political or policy consequences for the United States.”

Administration officials have argued they are already taking extraordinary steps to protect threatened minorities in Iraq, pointing to, for example, the 2014 evacuation of Yazidis from Mount Sinjar — and that a genocide designation wouldn’t change that. White House press secretary Josh Earnest said as much when he was pressed on the issue during a recent White House briefing during which he said a genocide designation is “an open question that continues to be considered by administration lawyers.”

“The decision to apply this term to this situation is an important one,” Earnest said during a Feb. 4 briefing. “It has significant consequences, and it matters for a whole variety of reasons, both legal and moral. But it doesn’t change our response. And the fact is that this administration has been aggressive, even though that term has not been applied, in trying to protect religious minorities who are victims or potential victims of violence.”