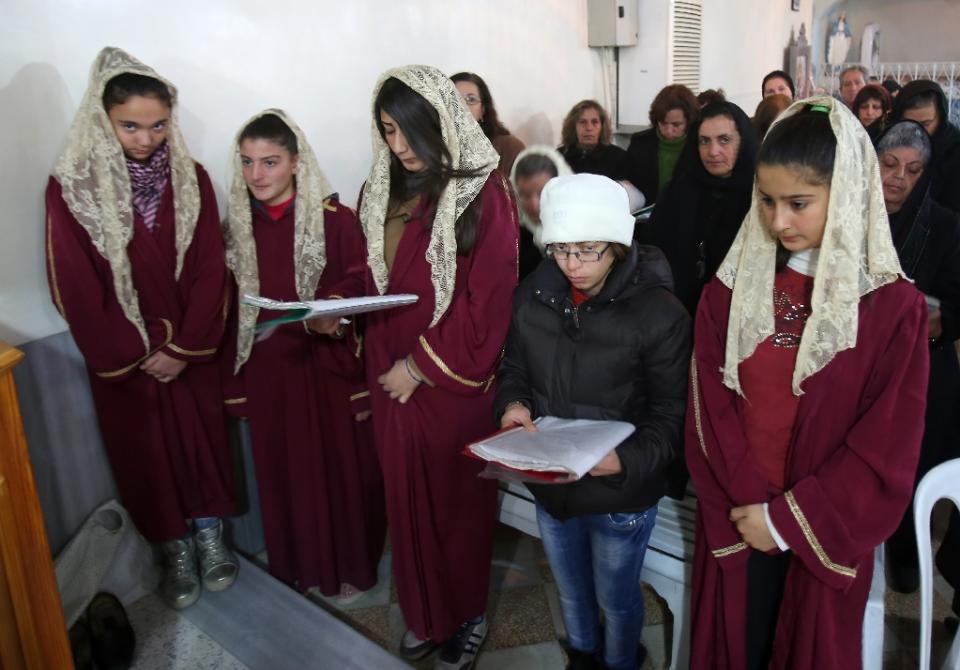 AFP By Maher Al Mounes
Syrians attend mass at a church in Sadad, a majority Syriac Orthodox Christian ancient town which is believed to be the same town referred to as Zedad in the Old
Sadad (Syria) (AFP) – As military vehicles roll by, Syrian boys and girls gingerly decorate a large Christmas tree in the Christian town of Sadad, at the front lines with the Islamic State jihadist group.

Most residents of the ancient Syriac Orthodox-majority town in central Syria have fled, and those remaining are reluctant to celebrate the holidays as fierce battles with IS rage nearby.

With the steady approach of IS, Youssef, a retired 65-year-old man living alone in Sadad, sent his family away to a safer village.

“I haven’t put up a Christmas tree in my house for the past four years because the situation does not allow us to, and because I can’t find a place for joy in my home,” he says.

Wearing a long brown coat in the chilly Syrian winter, he says sadly, “Dozens of people have died in this village; how could I put up decorations or hand out holiday sweets?”

Sadad’s historic churches have been caught in the crossfire before, with regime and rebel forces battling for control of the town two years ago.

Although government forces eventually secured the town, its residents are under attack again this winter — this time from IS. 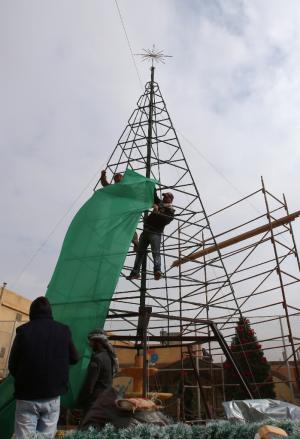 “What is special about Christmas this year is the imminent threat that Sadad is facing, and the bitter memories that have come back to us,” says town mayor Sleiman Khalil.

“Now, we’re afraid it will happen again with fighters from Daesh,” he said, referring to IS by its Arabic acronym.

Despite backing by the Russian military, government forces have struggled to keep IS — which controls swathes of territory in Syria and Iraq — at bay in the central province of Homs.

On December 10, regime armed forces lost control of Maheen, a village 18 kilometres (11 miles) from Sadad, to IS after holding it for only a few weeks.

Only days before Christmas, decorations in Sadad are sparse. Instead, the town’s streets are teeming with military vehicles and fighters, who now outnumber civilian residents. 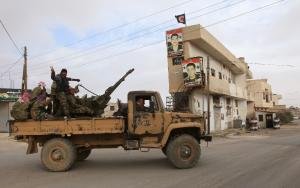 Of the town’s nine churches — some of them ancient heritage sites — just three are still operational.

In the church of Tiwadoros, some 15 kilometres (10 miles) from the front lines with IS, families gather for a modest service.

Women, elderly couples, and a handful of young men and fighters taking a break from the clashes fill about two-thirds of the wooden seats inside.

A massive collage of some 60 pictures is plastered across one of the walls, with the title “The Martyrs of Sadad”.

“I will defy Daesh until the last moment. How could I leave the village while my son defends it, and me, on the front lines?” says Shams Abboud, 62. 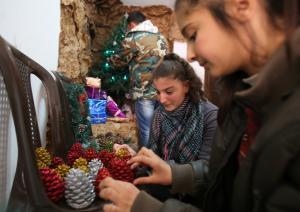 Residents decorate their local church for Christmas in Sadad, a majority Syriac Orthodox Christian a …

The sermon that day includes a special prayer in the Syriac language for “our youth, who at this time of year used to be busy decorating a big tree in the middle of the village, but who are now busy protecting our front lines,” says priest Mtanyos Melhem Stouf.

Outside, about 10 young Sadad residents put the finishing touches to the large metal tree in the town’s Mar Mikhayel garden and plan holiday activities for the remaining children in the town.

As he sets up a large nativity scene, Hay says the recent atmosphere of fear in the town had inspired him “to plant a small smile on the faces of the children, so we can make them forget the sounds of bullets and artillery.”

Sadad’s schools have been transformed into shelters for pro-regime militia, including more than 700 Lebanese Shiite Hezbollah fighters, who have reinforced government soldiers.

“All I want is for this Christmas to pass in peace,” says Mtanyos Mawas, an elderly man who decided against fleeing Sadad when he heard the army was dispatching reinforcements.

“Despite our religious differences with Hezbollah, we’re confronting a single enemy together, and that is Daesh,” he says.

“Having Hezbollah on the ground has brought safety and peace of mind to the residents and the fighters alike,” he adds warmly.