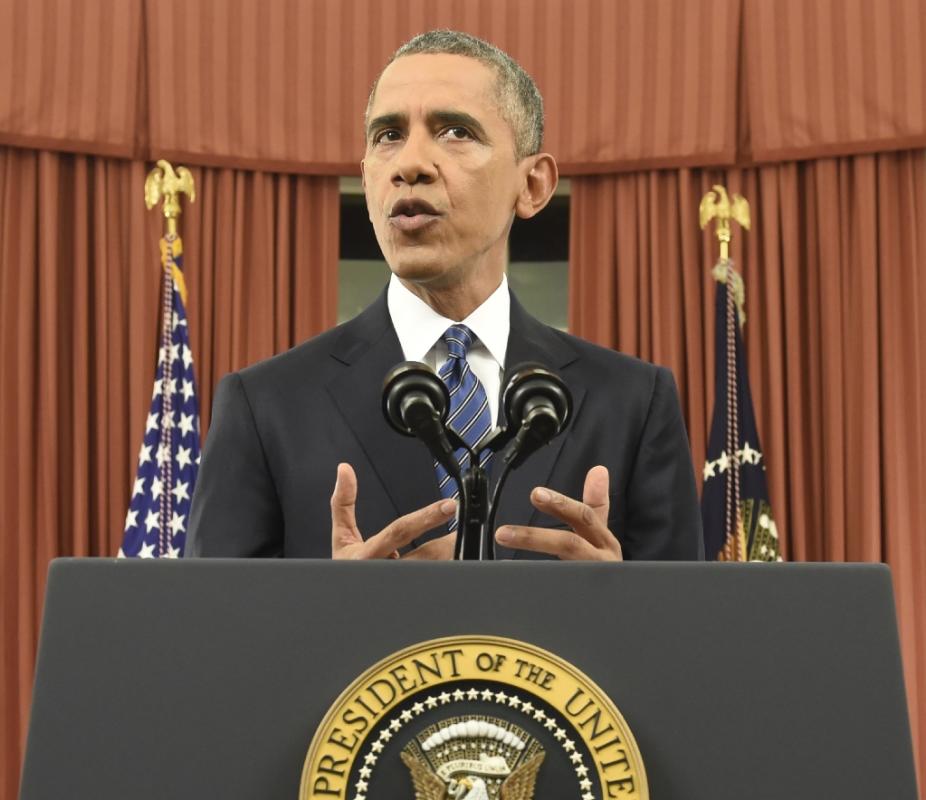 WASHINGTON (AP) — President Barack Obama on Monday said the U.S.-led coalition is making progress against Islamic State militants in both Iraq and Syria, as he delivered an update on the campaign aimed at reassuring Americans worried about the spread of extremism-fuel terrorism.”We are hitting ISIL harder than ever,” Obama said, using the shorthand for the Islamic State group. Obama said airstrikes had increased and the coalition had successfully knocked out key figures in the group’s leadership “one by one.”

“The point is, ISIL leaders cannot hide and our next message to them is simple: ‘You are next.'” Obama said.

The tough talk came after Obama met with this top national security advisers at the Pentagon. The rare meeting outside the White House was part of weeklong push to explain his strategy for stopping the Islamic State group abroad and its sympathizers at home.

Obama is also slated to attend a briefing at the National Counterterrorism Center later in the week.

The high-profile visits to agencies charged with keeping the U.S. safe follow an Oval Office address Dec. 6 that aimed to reassure the public but that critics said failed to do the job.

“The American people are smart enough to know when something is working or not, and it’s obvious that the president’s current strategy isn’t working,” House Majority Leader Kevin McCarthy, R-Calif., said in a statement released Monday. “Far from being contained — much less defeated — ISIS has now extended the reach of its terror farther than ever before.” ISIS is another acronym for the group.

Obama is also hoping to draw a contrast with Donald Trump and his inflammatory remarks about Muslims, which the Obama administration has said endangers U.S. national security.

“Terrorists like ISIL are trying to divide us along lines of religion and background,” Obama said in his weekly address. “That’s how they stoke fear. That’s how they recruit.”

This week, he said, “we’ll move forward on all fronts.”

After a series of setbacks, the U.S. and its coalition partners have claimed progress recently in wresting back territory from IS and eliminating some of its key leaders in Syria and Iraq. The military has said hundreds of U.S airstrikes in recent days dealt a major blow to IS ranks in the western Iraqi city of Ramadi, which IS seized in May.

But progress in Ramadi, as elsewhere, has been slow, leading to calls in the U.S. and abroad for a tougher U.S. response. Obama has authorized sending small numbers of U.S. special forces to Iraq and Syria, but has insisted he won’t budge from his determination not to send in major U.S. ground forces.

The president said Monday the U.S. would continue to urge coalition allies to contribute more to the fight. Defense Secretary Ash Carter planned to leave for the Middle East on Monday to ask allies there to step up, Obama said.

The public relations campaign, one week before Christmas, comes as the public is jittery about the specter of extremism after deadly attacks in California and Paris. Seven in 10 Americans rate the risk of an attack in the U.S. as at least somewhat high, according to an Associated Press-GfK poll — a sharp increase from the 5 in 10 who said that in January.

U.S. officials have insisted there are no specific, credible threats to the United States. But the apparent lack of warning before San Bernardino has raised concerns about whether the U.S. has a handle on potential attacks, especially during high-profile times such as the end-of-year holidays.

At the National Counterterrorism Center, which analyzes intelligence at its facility in suburban Virginia, Obama planned to address reporters Thursday after a briefing by intelligence and security agencies on threat assessments. Obama receives a similar briefing each year before the holidays.

Concerns about extremism emanating from the Middle East have taken center stage in the presidential race. Hillary Clinton, the leading Democratic candidate, planned a speech in Minnesota on Tuesday to present a plan for protecting the U.S. homeland.

Obama has tried to use his bully pulpit as a counterpoint to Trump and his widely condemned proposal to bar Muslims from entering the U.S. The White House scheduled a conference call Monday with religious leaders about ways to fight discrimination and promote religious tolerance.

Aiming to put a human face on the Syrian refugee issue, Obama is to speak Tuesday at the National Archives Museum, where 31 immigrants from Iraq, Ethiopia, Uganda and 23 other nations will be sworn in as U.S. citizens. Obama planned to use that occasion to reframe the national conversation about immigrants around the country’s founding values of tolerance and freedom.