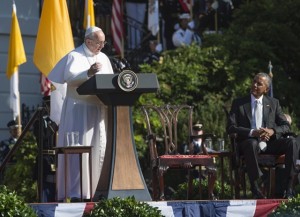 WASHINGTON – Pope Francis encouraged U.S. bishops to continue to defend religious liberty in America in a message that will be welcomed by conservatives fighting for conscience exemptions on gay marriage and the Obama administration’s health care mandate.
Speaking from the South Lawn of the White House with President Barack Obama at his side, Francis said religious liberty is “one of America’s most precious possessions.”
He said everyone in America is called to “preserve and defend that freedom from everything that would threaten or compromise it.”
Religious freedom has become a rallying cry for opponents of gay marriage in the U.S. who don’t want to recognize same-sex spouses in their charities, schools, hospitals and businesses.
The issue is a major point of tension between Obama and the U.S. bishops.
The pope also said climate change is an urgent problem that “can no longer be left to a future generation.”
Francis waded into that hot-button political issue in remarks at the White House, where President Barack Obama and a crowd of thousands welcomed him.
The pope praised Obama for focusing on the environment and the need to cut air pollution, calling it “encouraging.”
Francis cast climate change as a peril to what he called our “common home” in a speech that also called for safeguarding religious liberty and rejecting discrimination.
On climate change, he says time remains to make changes that are needed but also warns that “we are living at a critical moment of history.”
Climate change is one of several issues on which the pope and the president agree, though Republicans in Congress have blocked many of Obama’s efforts to address the issue by law.
President Obama commended Pope Francis for “shaking us out of complacency” and giving people confidence to pursue a world that is more loving, just and free.
The president said the excitement surrounding the pope’s visit must be attributed not only to his role as head of the Catholic Church, but also Francis’ humility and generosity of spirit.
Obama singled out the pope’s call for focusing on the poor and the marginalized, including refugees fleeing war and immigrants in search of a better life. He’s also highlighting the pope’s call for protecting the planet and supporting communities vulnerable to the impacts of climate change.
The president thanked the pope for his support for efforts to normalize relations between the U.S. and Cuba.
President Obama and Pope Francis had a private meeting in the Oval Office following the elaborate welcome ceremony for Francis on the South Lawn of the White House that took place under sunny, blue skies in front of some 15,000 onlookers.
After the ceremony, Obama led Francis into the White House. They reappeared on a balcony and waved to the throngs huddled on the lawn and walked along the colonnade and past the famed Rose Garden on the way to the president’s office.
Each leader addressed the contentious climate change issue in brief remarks to the crowd. It’s one of several issues on which they agree and a likely topic of discussion in their meeting.
Another likely topic is the restoration of full diplomatic relations between the U.S. and Cuba. Francis acted as something of a go-between for the longtime foes.