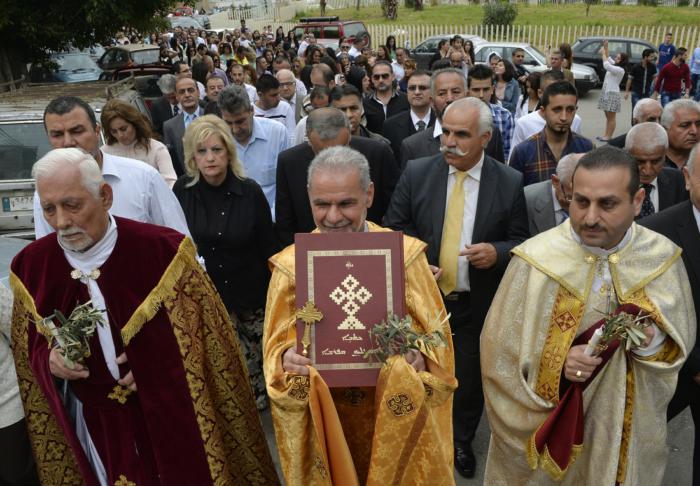 BY CATHOLIC NEWS SERVICE , IN: WORLD
Iraqi and Syrian Christians march during a Palm Sunday procession in Beirut, Lebanon, March 29. Synods of Melkite Catholic and Maronite Catholic bishops in Lebanon called on the world’s governments to help resolve the conflicts in the region so that Christians can remain in place. (CNS photo/Wael Hamzeh, EPA)
BEIRUT (CNS) — Meeting for their respective annual synods in Lebanon, Maronite Catholic and Melkite Catholic bishops called for an end to wars in the region and for the election of a president in Lebanon.

Melkite Catholic Patriarch Gregoire III Laham, who was born in Syria, presided over the Melkite synod June 15-19 at the patriarchal summer residence in Ain-Traz, Lebanon. He pointed to “the miseries and dangers that destroy our people and cause paralysis of Christian spirituality.”

“We appeal to all: Stop the war. The war in Syria and the war against Syria is a real genocide,” Patriarch Laham said in the final statement. “This is a third world war whose price is largely paid by the Syrian people in all its components and … confessions.”

“We call, loud and clear — upon neighboring states, Arab countries, the European Union, the USA, Russia, China, Latin America and all world states — begging them to work seriously to put an end to this war,” he said.

“We call, loud and clear — upon neighboring states, Arab countries, the European Union, the USA, Russia, China, Latin America and all world states — begging them to work seriously to put an end to this war,” he said.

In his opening address, the patriarch cited Pope Francis’ Dec. 21 letter to Middle East Christians, whom the pope described as serving “as a roadmap for us Christians to remain united and remain united, too, as Christians and Muslims.”

The Melkite patriarch expressed his concern about the “bleeding” caused by Christian emigration.

“It is terribly sad to see how the crises that the Middle East is going through are driving an exponential growth in Eastern Christian emigration,” he said, citing a survey indicating that 60 percent of Lebanese have decided to leave the country, with 35 percent awaiting visas. “Most of them are Christian,” he said.

“If that is the case with Lebanon, what then can be the situation and outlook for less-stable countries, torn by war and ruled by chaos?” Patriarch Laham asked. “It is necessary to operate in every way possible to try to stop this bleeding.”

He called for Christians in the Middle East to remain so that, with Muslims, they can “build together a better future for our upcoming generations and our shared future.”

Maronite Catholic bishops, in a statement at the conclusion of their four-day synod June 18, called on “brotherly and friendly countries” to support Lebanon and help it out of the political, economic and security crises it faces because of the Middle East conflicts and to work to maintain freedom and democracy in Lebanon.

Cardinal Bechara Rai, Maronite Catholic patriarch, presided over the synod, which took place at the patriarchal seat of Bkerke, north of Beirut.

The Maronite bishops urged political powers to overcome their disputes and work toward filling the vacancy in Lebanon’s presidency.

Lebanon has been without a president since May 2014 when the term of Michel Sleiman ended without the election of a successor. Ongoing disputes between rival groups over a compromise candidate have thwarted the election.

Lebanon’s institutional system, based on the National Pact of 1943, provides that the office of the president be occupied by a Maronite Catholic, the prime minister be a Sunni Muslim and the speaker of the Parliament a Shiite Muslim.

“The elections are not restricted to Christians, but the whole of Lebanon is concerned with the presidency,” the bishops said.

As synod opened, the Maronite bishops prayed for “the war to end — through diplomatic channels — in Syria, Iraq and Yemen” and for peace to be re-established and consolidated in the Holy Land and in all the countries of the Middle East.

Cardinal Angelo Scola of Milan was a special guest at the synod June 18. Cardinal Scola and Cardinal Rai traveled from Beirut to Irbil, Iraq, for a one-day visit June 19 to show their support and solidarity to tens of thousands of Christians uprooted by the Islamic State last summer.