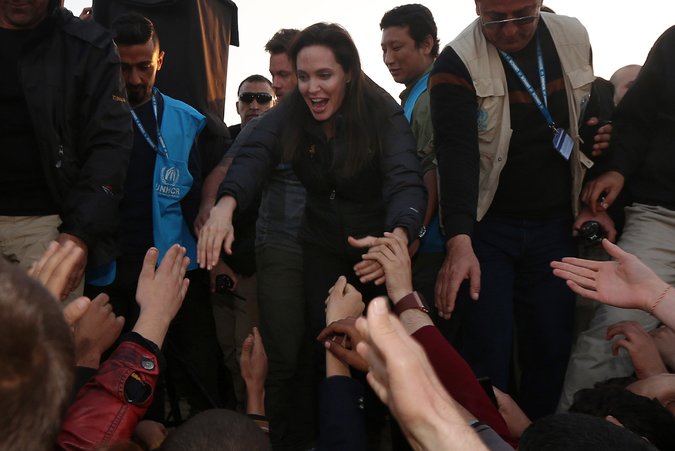 By ANGELINA JOLIEJAN. Angelina Jolie on the Syrians and Iraqis Who Can’t Go Home
Angelina Jolie at a refugee camp in Iraq’s Dohuk province on Jan. 25. Credit Safin Hamed/Agence France-Presse — Getty Images
KHANKE, Iraq — I HAVE visited Iraq five times since 2007, and I have seen nothing like the suffering I’m witnessing now.
I came to visit the camps and informal settlements where displaced Iraqis and Syrian refugees are desperately seeking shelter from the fighting that has convulsed their region.
In almost four years of war, nearly half of Syria’s population of 23 million people has been uprooted. Within Iraq itself, more than two million people have fled conflict and the terror unleashed by extremist groups. These refugees and displaced people have witnessed unspeakable brutality. Their children are out of school, they are struggling to survive, and they are surrounded on all sides by violence.

For many years I have visited camps, and every time, I sit in a tent and hear stories. I try my best to give support. To say something that will show solidarity and give some kind of thoughtful guidance. On this trip I was speechless.

What do you say to a mother with tears streaming down her face who says her daughter is in the hands of the Islamic State, or ISIS, and that she wishes she were there, too? Even if she had to be raped and tortured, she says, it would be better than not being with her daughter.

What do you say to the 13-year-old girl who describes the warehouses where she and the others lived and would be pulled out, three at a time, to be raped by the men? When her brother found out, he killed himself.

How can you speak when a woman your own age looks you in the eye and tells you that her whole family was killed in front of her, and that she now lives alone in a tent and has minimal food rations?

In the next tent, I met a family of eight children. No parents. Father killed. Mother missing, most likely taken. The 19-year-old boy is the sole breadwinner. When I comment that it is a lot of responsibility for his age, he just smiles and puts his arm around his young sister. He tells me he is grateful he has the opportunity to work and help them. He means it. He and his family are the hope for the future. They are resilient against impossible odds.

Nothing prepares you for the reality of so much individual human misery: for the stories of suffering and death, and the gaze of hungry, traumatized children.

Who can blame them for thinking that we have given up on them? Only a fraction of the humanitarian aid they need is being provided. There has been no progress on ending the war in Syria since the Geneva process collapsed 12 months ago. Syria is in flames, and areas of Iraq are gripped by fighting. The doors of many nations are bolted against them. There is nowhere they can turn.Syria’s neighbors have taken in nearly four million Syrian refugees, but they are reaching their limits. Syrian refugees now make up 10 percent of Jordan’s population. In Lebanon, every fourth person is now a Syrian. They need food, shelter, education, health care and work. This means fewer resources available for local people. Far wealthier countries might crack under these pressures.

Stories of terror, barrel bombs and massacres have acquired an awful familiarity. There is a great temptation to turn inward, to focus on our own troubles.

But the plain fact is we cannot insulate ourselves against this crisis. The spread of extremism, the surge in foreign fighters, the threat of new terrorism — only an end to the war in Syria will begin to turn the tide on these problems. Without that, we are just tinkering at the edges.

At stake are not only the lives of millions of people and the future of the Middle East, but also the credibility of the international system. What does it say about our commitment to human rights and accountability that we seem to tolerate crimes against humanity happening in Syria and Iraq on a daily basis?

When the United Nations refugee agency was created after World War II, it was intended to help people return to their homes after conflict. It wasn’t created to feed, year after year, people who may never go home, whose children will be born stateless, and whose countries may never see peace. But that is the situation today, with 51 million refugees, asylum-seekers or displaced people worldwide, more than at any time in the organization’s history.

Much more assistance must be found to help Syria’s neighbors bear the unsustainable burden of millions of refugees. The United Nations’ humanitarian appeals are significantly underfunded. Countries outside the region should offer sanctuary to the most vulnerable refugees in need of resettlement — for example, those who have experienced rape or torture. And above all, the international community as a whole has to find a path to a peace settlement. It is not enough to defend our values at home, in our newspapers and in our institutions. We also have to defend them in the refugee camps of the Middle East, and the ruined ghost towns of Syria.