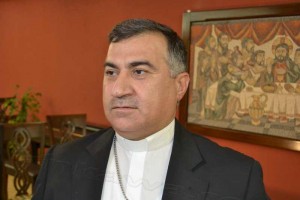 By John Pontifex
AN ARCHBISHOP from Kurdish northern Iraq grappling with the influx of more than 120,000 Christians fleeing ISIS is to come to London to plead their cause.
Archbishop Bashar Warda of Erbil is due to give an address in London’s Houses of Parliament on Monday, 9th February amid increasing concerns about the future of Christians who escaped from Mosul and Nineveh with no more than the clothes they were wearing.
At the House of Lords event sponsored by human rights campaigner Lord David Alton of Liverpool, Archbishop Warda is expected to describe how he helped spearhead a massive relief operation for Christians and others who fled after ISIS invaded last summer.
In the days that followed, Church compounds were turned into tented displacement camps overnight.
Negotiations with the Kurdistan Regional Government resulted in schools and other public buildings being opened up for the displaced who also took shelter in building sites, and anywhere capable of providing cover.
Six months on and with no immediate prospect of a return to their homelands, many of the displaced are now fleeing abroad, prompting growing uncertainty about the survival of Christianity in a country now home to less than 300,000 faithful – down from one million or more before 2003.
The plight of Christians in Erbil was witnessed in December by a delegation from the Church of England and while he is in London Archbishop Warda will give an address to the General Synod.
Archbishop Warda, who is coming to thank UK benefactors of charities Aid to the Church in Need (ACN) and Iraqi Christians in Need (ICIN) which have provided emergency help, will preach at Mass at Westminster Cathedral on Wednesday, 11th February at 5.30pm and give a talk in the cathedral hall afterwards.
The cause of Christians in Iraq has been championed by HRH The Prince of Wales who has spoken out on their plight and provided donations to support ACN and ICIN’s work.
ACN, which is prioritising work for Christians from Iraq, is sponsoring temporary PVC homes and gifts for children, including warm clothes, colouring books and pens and devotional items.
The charity’s biggest project is providing temporary PVC schools – five in the province of Erbil – and three in Dohuk province, northern Kurdistan.
To date, two schools have been constructed and a third is underway.