By Paul Crompton | Al Arabiya News
Christian Iraqi refugee children take part in a Christmas ceremony in Ankawa, the Christian quarter of Erbil. (Photo courtesy of Aleteia)
After a year of the Islamic State of Iraq and Syria purging Christian minorities from its self-declared caliphate, Iraqi and Syrian Christians are facing muted celebrations this Christmas.
“Talk of Christmas and Christian occasions is forbidden under ISIS,” said Sulaiman Youssef, a Syrian researcher on minorities.

“The group has destroyed, torched and looted all churches, and barred any display of Christian faith. They also forced the hijab and Islamic way of dress on Christian women, and killed several Christian men for refusing to obey their orders.”

Faced with the option of either paying a tax, converting to Islam or fleeing, almost no Christians now live in ISIS-controlled areas in Syria, Youssef said.

When ISIS first rose to power – in the Syrian cities of Raqqa, Tabaqa and Deir al-Zour – churches were destroyed or repurposed for militant uses.

ISIS fighters also robbed the belongings of Christians and confiscated their homes, properties and shops. 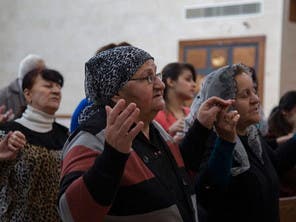 Christian Iraqi women pray during a Dec. 11 Mass at the Maronite Catholic Cathedral of the Resurrection in Rabieh, east of Beirut. (Photo courtesy of Catholic News Service)

Since most Christian sects – including Armenians, Assyrians and Syriacs – living in ISIS-controlled areas have fled, the lives of the very few who remain are similar to the “cemetery’s dead,” said Youssef.

“Those who have remained are a few families of elderly who couldn’t leave and are forced to pay the jizya [tax] to ISIS… We can’t get in touch with these people due to the network outage,” he added.

Father Maysar Bahnam, who leads a congregation of around 400 at Baghdad’s Mar Korkis Catholic Church, said this year’s celebrations will be limited to traditional mass and liturgy services, and will be strictly limited to the confines of the church.

“The situation in our city is very difficult… We can’t do anything outside the church,” he said.

After seeing the effects of ISIS rule in Syria, no Christians still live in Iraq’s ISIS-controlled areas, Bahnam said.

“Now, all the Christian people are living in Kurdistan…. so there’s no-one in the area” that ISIS controls.

Youssef echoed Bahnam’s comments on the situation being worse in Iraq.

“In Iraq, the scene is uglier and more horrid than it is in Syria, as ISIS has conducted operations of ethnic and religious cleansing which affected more than 250,000 Christians in the Nineveh province, which they control. “ 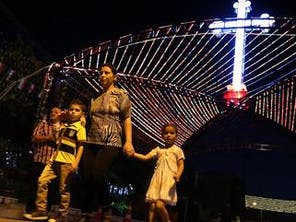 In this photo, some of the Iraqi Christians who fled to Erbil walk past decorations displayed in a religious festival, in September this year. (AFP)

Michel Kassarji, the Chaldean bishop of Beirut, said his church was struggling to meet the needs of the 1,800 Christian refugee families – a figure growing by 25 every week – under its care.

“It’s very difficult… As a church, we do everything to make the people here happy, and we try to help them with their food” and put children in school, said Kassarji.

Nevertheless, the church still has numerous religious events this Christmas season, which both Iraqi and Syrian Christians attend.

On Christmas day “we have three to four masses, and every three or four days we [give presents] to the children,” he added.

Although Lebanon’s population is just under 5 million, there will be more than 1.3 million registered Syrian refugees in Lebanon by the start of next year, according to the U.N. refugee agency, with Iraqis making up a “significant” increase since ISIS seized Iraq’s second-largest city Mosul in June.

Canon Andrew White, the vicar of Iraq’s only Anglican church who has fled the country, wrote on Facebook last week that despite the hardships, Iraqi Christians kept on clinging to their faith.

“I will never forget the day in Baghdad when we had some visitors. They had come to see what it was really like for Christians in Iraq. They were so surprised by how happy the thousands of people were in our congregation. ‘How can you be so happy when you are surrounded, suicide bombs, mortar’s rockets and such violence.’ One of our young people answered the statement. “You see when you have lost everything, Jesus is all you have got left.”