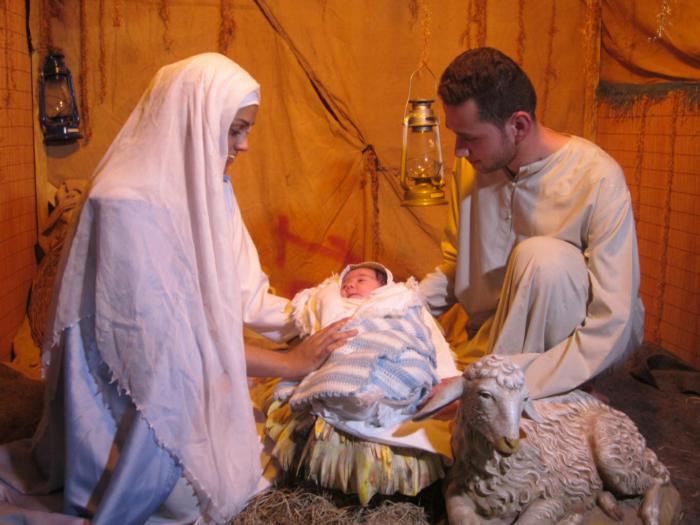 By Doreen Abi Raad
Iraqis re-enact the Nativity at Ainkawa refugee camp near Irbil, Iraq, Dec. 19. Christmas bells did not ring in Mosul and Christian villages this year for the first time since 1600 years. (CNS photo/Sahar Mansour)
BEIRUT (CNS) — Catholic patriarchs of the Middle East lamented the suffering of their people in violence-wracked areas and offered words of hope while calling for prayers for their safety.

In separate Christmas messages, each echoed a call for peace and issued pleas to the United States and Western nations to undertake new policies aimed at bringing an end to the violence that has plagued the region for years.

Chaldean Catholic Patriarch Louis Sako of Baghdad traveled to Ainkawa, a suburb of Irbil in the Kurdistan region of northern Iraq, to celebrate Mass Christmas Eve for more than 2,000 displaced Christians under a massive tent.

Syriac Catholic Archbishop Yohanna Moshe of Mosul, also among the displaced, and Archbishop Barnaba Yousif Habash of the Syriac Diocese of Our Lady of Deliverance of Newark, New Jersey, were concelebrants.

Archbishop Habash, who oversees the spiritual needs of Syriac Catholics in the United States and Canada, visited Iraq to spend the holidays with the displaced.

Both clerics are from Qaraqosh, Iraq, a largely Syriac Catholic town until it was overtaken by Islamic State militants in August. More than 120,000 Christians and other minorities fled to Kurdistan from Mosul and other cities in the Ninevah Plain to escape.

Pope Francis, in a surprise phone call to the Mass, offered words of encouragement. “You’re like Jesus on this night, and I bless you and am close to you,” he told the congregation.

In his homily, Patriarch Sako said the birth of Christ was being celebrated under painful circumstances because they were separated from their homes and friends. “But this is not the end of the world,” he said.

“(Jesus’) birth revives hope in us that we may return to what we had to leave behind, to rebuild what has been damaged, reform what has been ruined, reunite what has been divided, and bring back home those who have been displaced,” the patriarch said.

“Was not Jesus born away from his hometown and house? Was not he persecuted and moved to Egypt then came back?” he asked.

Patriarch Sako called on the world to pray for the displaced Christians “so that they keep their courage, hope and trust in God, their father.” They need reassurance, he said, “that they are not alone and abandoned or forgotten.”

He urged the United States and Western nations “to reconsider their foreign policies” toward the Middle East.

“The current conflicts are in nobody’s favor; the use of weapons does not make true reforms, but through courageous and civilized dialogue. There is a need for a new vision and a more realistic and just processing of the issues taking place in the Middle East,” Patriarch Sako said.

Nechervan Barzani, prime minister of Iraq’s semi-autonomous Kurdish region, and other officials attended the Mass. Barzani asked the Christians to stay in Iraq and not to emigrate, saying the Kurdish regional government will do its best to help them.

In a Christmas message from Beirut, Syriac Catholic Patriarch Ignace Joseph III Younan expressed sorrow that “from Lebanon to Iraq, passing through Syria and Palestine, our people are suffering from war and persecution, murder and displacement.”

He lamented that “the bells of our churches in Mosul and the towns and villages of the Ninevah Plain, for the first time since the dawn of Christianity, are not ringing out the joy of the birth of the Savior because hundreds of thousands of believers had to flee into the open because of the injustice of terrorists.”

Patriarch Younan also decried the silence of the international community.

“How long will the world remain silent about the crimes committed in the name of religion, with millions of peaceful citizens, victims of atonement and intolerance, ignorance and hatred?” he asked.

The patriarch, a native of Syria, also expressed sorrow regarding his homeland’s long civil war. Noting that some powers in the world are “inducible co-conspirators” he called for the international community to move forward with “positive initiatives” to end Syria’s war.

He noted that amid Lebanon’s economic and political crises, the country is grappling with millions of displaced people from Syria and Iraq. He also called for the election of a new president in Lebanon.

Lebanon has been without a president since May when the term of Michel Suleiman ended. Legislators have not been able to agree on a successor. Under Lebanon’s power-sharing system, the president must be a Maronite Catholic, the prime minister a Sunni Muslim and the speaker of the parliament a Shiite Muslim.

In a Christmas message, Syrian-born Melkite Catholic Patriarch Gregoire III Laham said the so-called Arab Spring was based on a “destructive theory of conflict, quite contrary to God’s will for humanity.”

Patriarch Laham appealed “to the whole world, Arab and other countries … to act on the basis of justice, law, forgiveness, dialogue and meeting, which is preferable to that of war, weapons and armament.”

“We are facing a great ideological danger, represented by the so-called Islamic State,” Patriarch Laham said.

Cardinal Bechara Rai, patriarch of the Maronite Catholic Church, pointed to the darkness enveloping Lebanon and the Middle East, but reminded the faithful of a quotation from St. Ephrem the Syrian, patron saint of the Syriac Catholic Church, that “Our Lord Jesus Christ came and saved us from darkness.”

Also expressing concern that Lebanon remains without a leader, he said the country needs “a promising and wise president who is known by his practices and who forgets about his personal interests.”

“Only such a president could give back priority to the nation’s interest and preside over a serious and transparent dialogue that would lead to a true internal peace,” the cardinal said.