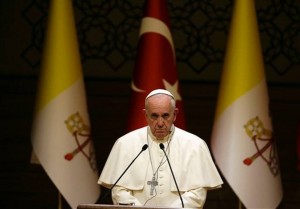 YEREVAN, NOVEMBER 29, ARMENPRESS. Pope Francis demanded respect for religious freedom during a meeting with Turkish President Recep Tayyip Erdogan on Friday, a call that will resonate particularly with Christians who say they suffer discrimination in a country where Islam has reasserted itself in the public sphere.
As reports “Armenpress” citing WSJ, at the start of a three-day visit to Turkey, the pope also reaffirmed his belief in dialogue between religions, saying it could be a key part of bringing peace to the region. Relations between Christian and Muslims have come under strain in recent months amid violence against Christians by Islamic extremists in Syria and Iraq, with some critics saying Islamic leaders haven’t denounced the atrocities strongly enough.
“It is essential that all citizens—Muslim, Jewish and Christian—both in the provision and practice of the law, enjoy the same rights and respect the same duties,” the pope said. “Interreligious and intercultural dialogue can make an important contribution to [peace], so that there will be an end to all forms of fundamentalism and terrorism.”
Pope Francis’ outreach to Islam during his 20-month papacy has earned him praise by Muslim leaders. In making his comments, the pope walked a fine line between extending a hand to Muslim leaders and prodding them to do more to guarantee the rights of non-Muslim minorities, at home and across borders.
Mr. Erdogan, a pious Muslim who has scaled back the rigid secularism that long reigned in Turkey, held up the country’s Islamic-infused democracy as a model for reconciliation in a region torn by sectarian strife. But the country’s small Christian population argues its rights are being trampled.
Mr. Erdogan welcomed the pope’s call for religious tolerance while pointing out that Islamophobia was on the rise. He underlined the issue of “increasing prejudice and intolerance against Muslims.”
The pontiff also praised Turkey for welcoming huge numbers of Iraqi and Syrian refugees, but challenged Ankara to help find “viable paths of peace” in the war-torn region. He reiterated his support of multilateral military intervention to stop the violence by Islamic State.