The theatre is filled with moments when everything clicks together, every part, scene and note, to produce a magical experience for audience and players alike. It happened at the Mesopotamian Night Chicago’s premiere concert October 11 at the North Shore Center for the Performing Arts in Skokie, IL.
“Fortune sides with him who dares,” said Virgil in his epic poem The Aeneid. Mesopotamian Night Chicago did just that with a feast of Assyrian music, theatre and dance — and reaped a fortune in accolades from an overwhelmed and appreciative audience.

Mesopotamian Night concerts premiered in California in 2007 to celebrate the Assyrian performing arts as well as raise funds for the Assyrian Aid Society of America (AAS-A), with the proceeds supporting the needy Assyrians, Syriacs and Chaldeans of Iraq and Syria. In its Chicago premiere, Mesopotamian Night raised an impressive sum of money that will help our people currently suffering at the hands of the Islamic State ISIS and other brutal groups intent on destroying or displacing Christians and other religious minorities.

That this was the first Assyrian concert of such magnitude in Chicago spoke well of the organizers and the performers — and the Assyrian community for embracing it with such enthusiasm. Mesopotamian Night Chicago had set out to present a sophisticated production the likes of which the Chicago Assyrian community had not seen, and the applause and the bravos said a lot about the its success.

Part of that success was due to the silky sheen the professional orchestra and conductor John Kendal Bailey painted over the production. Maestro Bailey, an American conductor of orchestral, operatic and choral music, who has also conducted the orchestra in several Mesopotamian Night concerts, takes a long leap from Beethoven, Brahms, Verdi and Puccini into the passionate and rhythmic world of Assyrian music. And he does it admirably. He does it so well that I cannot help but feel he has Assyrian blood running through his veins, and that he understands our music with its emotional and historic threads. He was in his element for this production as he led the orchestra for an exciting performance.

The evening began with cocktails and a silent auction of Assyrian art in the lobby, while backstage preparations continued for the players, culminating in a jam session in the green room of Assyrian folk and popular music sung by the cast from the play Taliboota, with Artistic Director Sargon Yalda on piano. What a treat that was. I had always felt the production would be a smash hit and the impromptu musicale was my ultimate confirmation.

Singer Sargon Youkhanna opened the show with the song “Shlama,” a tender greeting to our nation, followed by “Momeh,” a song crackling with the sheikhani rhythm, while a corps of Assyrian dancers in traditional costume broke into dance on the stage behind him. Someone at a wedding once remarked, “What’s better than drinking, eating and listening to Sargon?” No eating and drinking here, but some tasty listening to Sargon.

Malachi Ballet dancers and choreographer-dancer Malachi Squires followed with Mother Assyrian Unity Ballet. In the ballet, dark forces and tribalism create divisions among Assyrians to break up their unity, but in the end, goodness overcomes evil and unity appears on the horizon. Dr. Edison Ishaya, Mesopotamian Night Chicago executive director, inspired the idea for the ballet and Malachi set it to music by the French composer Eric Satie. The performance soared with high lifts as well as jagged and graceful movements. It was a lovely ballet and beautifully performed. Satie’s Gnossienne 1 and 4, short pieces originally for piano, were arranged for an unusual quartet of violin, viola, piano and oud.

It was only natural that one class act follow another as Janelle Yousif took the stage for a memorable performance of “Nineveh,” the sweet and tender Assyrian song composed by the legendary Rabi William Daniel, and the Italian chestnut “O sole mio.”

I first saw Janelle in a You Tube video as she performed “Nessun Dorma,” the signature aria from Puccini’s opera Turandot. The aria is a challenge to sing even for the most seasoned of operatic singers, and Janelle gave a fine performance of it. She was 11 years old. A year later at Mesopotamian Night Chicago, Janelle dazzled the audience with her beautiful voice and an impressive technique for her age. She has a lovely presence on stage, too. Perhaps someday we will see this astonishing Assyrian singer on the stage at the Metropolitan opera. Wouldn’t that be something for Assyrians?

Taliboota (The Marriage Proposal), an operetta by the Reverend Samuel Khangaldy set to Rabi William Daniel’s 1944 song-poem, brought the show’s first half to a rousing close. Taliboota is a frothy and charming operetta in the Gilbert and Sullivan tradition of the English light musicals. The original melody is short, only five lines and about twenty measures, according to Rev. Khangaldy.

Subsequently, he expanded the song-poem with additional dialogue and musical variations into a hilarious operetta that was a smash hit in its California premiere. Most of the original cast appeared in the Chicago premiere. Fine voices, good acting and delicious music made Taliboota pure joy to watch.

In the second half of the show, the documentary The Last Plight by the Assyrian filmmaker Sargon Saadi presented a tragic picture of the struggles of Assyrians in Syria. Through poignant images and interviews with Assyrians suffering at the hands of ISIS and other brutal Islamist groups, this talented young filmmaker told the truth about what the world community seems to ignore: that the Assyrians and other Christian minorities in the Middle East need help — and not much is coming.

Little wonder then that Chicago’s Assyrian community opened its heart for an incredibly successful live auction of Assyrian art. I must say I have never experienced such heartfelt generosity from an Assyrian community that saw the need to help our brethren suffering in a world poisoned by religious prejudice. As an Assyrian, I could not have been more proud on the stage. So thank you, my fellow Assyrians, and bless your heart for your kindness and generosity.

One great act deserves another, and the Assyrian singer Rachel Thomas was the perfect act after the auction. It is hard to categorize Rachael as an artistic talent, because she is multi-dimensional: instrumentalist, composer and singer. She has a sultry and velvety voice well suited for the stage as well as the cabaret, and a captivating stage presence. Rachel was a treat in her rendition of “Ishtary,” a love song about a girl named Ishtar, composed in 1977 by David Esha, and “Nishra d’Tkhoumeh” (The Eagle of Tkhumeh), the touching and nationalistic song about the plight of the Assyrians composed in 1917 by the legendary Freydoun Atouraya.

Save the Language, a short play written by the noted Assyrian Rabi Joann Yousif, highlighted the need to keep our language alive. Dr. Samuel Johnson, the English man of letters, said, “I am always sorry when any language is lost, because languages are the pedigree of nations.” Indeed, the play captured the spirit of the struggle to keep the Assyrian language from vanishing, for our language is a living thing and we need to speak it to keep it alive.

And then came Walter Aziz, the consummate Assyrian singer and showman. Walter must have been born on a bed of musical notes, because they flow through his blood. Mesopotamian Night Chicago was also his anniversary celebration of 40 years of performing — and he was back in Chicago where he started. Walter’s celebration will culminate in a new recording due out early next year.

I have worked with Walter at a number of concerts and he has always delivered an exciting performance. He did at Mesopotamian Night Chicago with a cluster of five Assyrian songs, starting with “Riqda d’ Khouyada” (Assyrian Unity Dance) and closing with “Atour Bit Khaya” (Assyria Shall Live). Dancers in traditional Assyrian costumes lit up the stage with Walter for a memorable closing performance.

As the artistic contributor, advisor, writer, auctioneer and master of ceremonies, I will always look back at this production with fondness, not only for the pleasure of working with a group of talented and dedicated Assyrians, but also for the magical night of entertainment we teamed up to create. And thanks also to the audience for the kind words and the applause. Indeed, Assyrians can do it: we can produce fabulous things when we unite for the common cause and let our imagination and creativity soar. And they did soar for the premiere of Mesopotamian Night Chicago.

Here’s to next year. 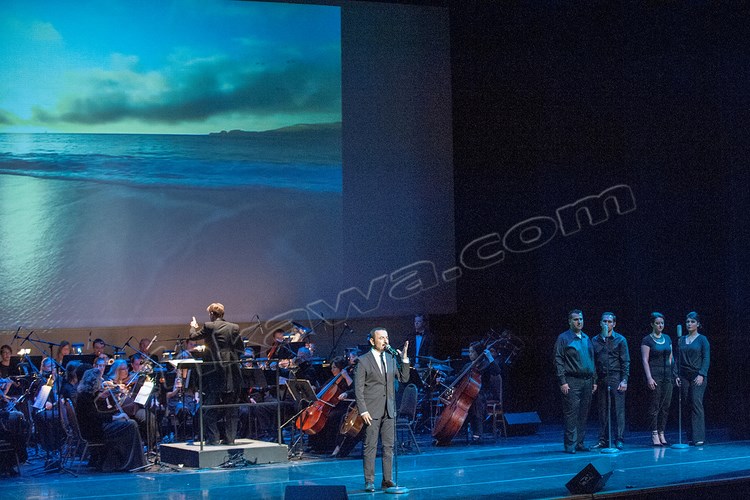 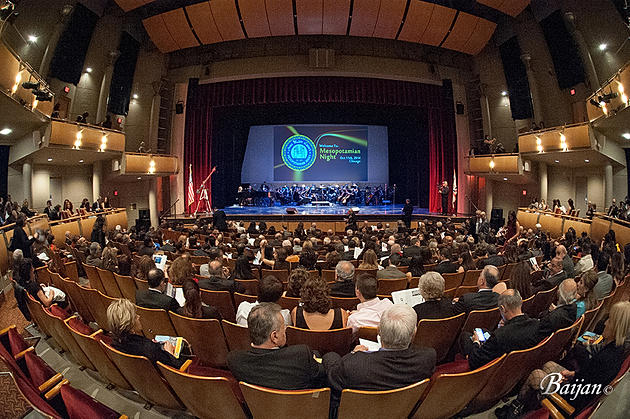 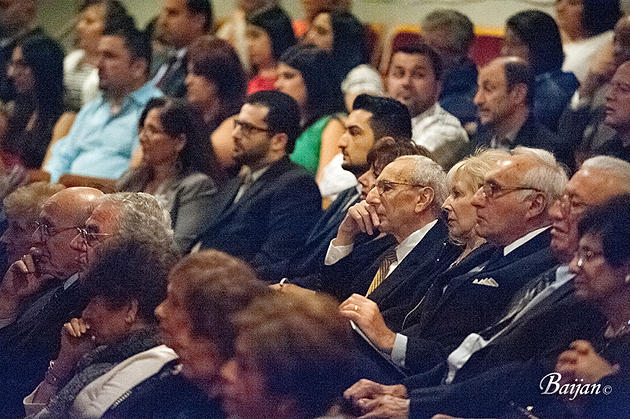 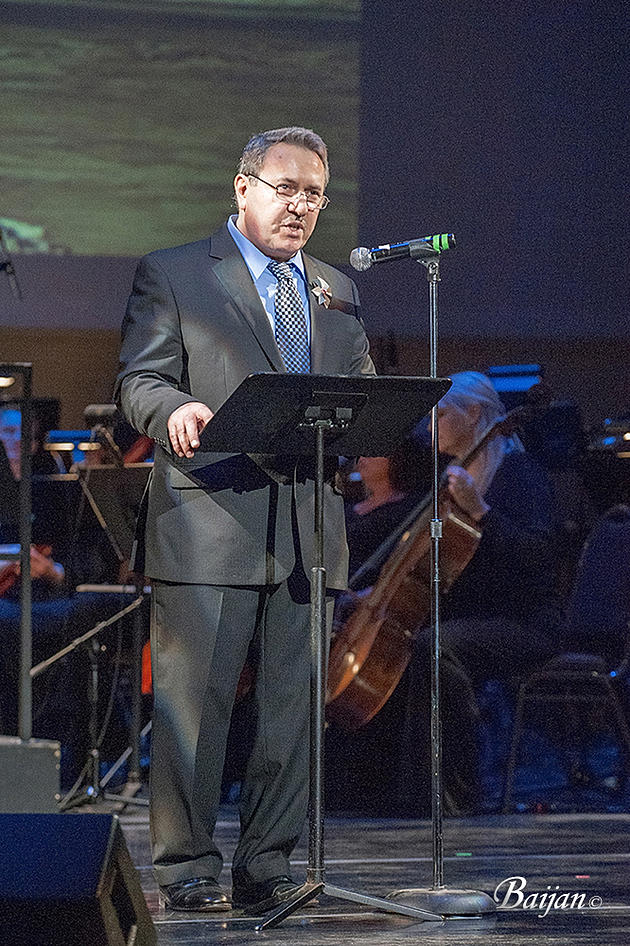 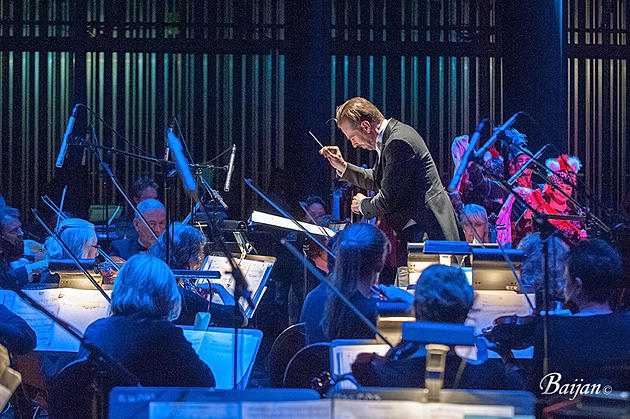 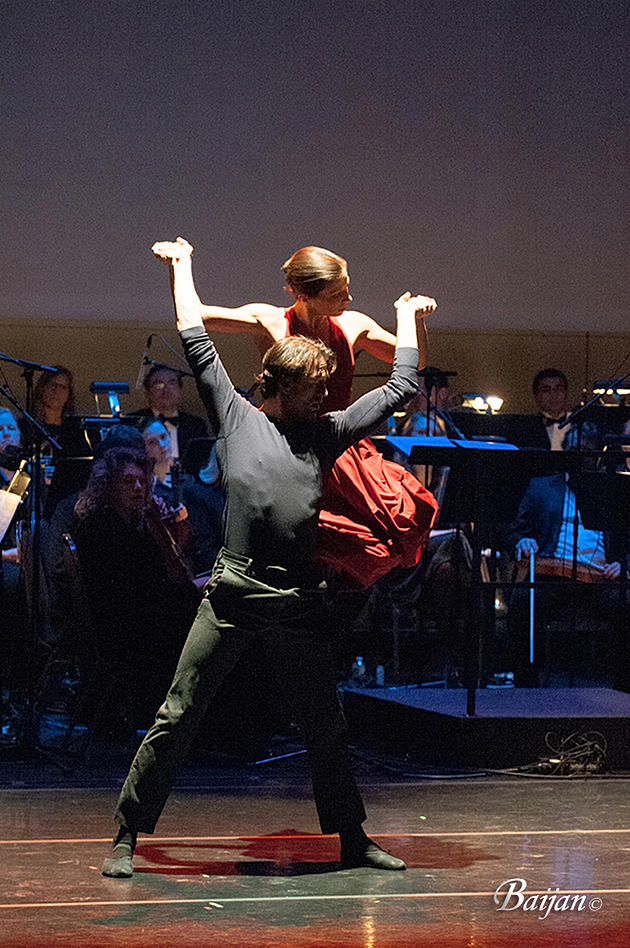 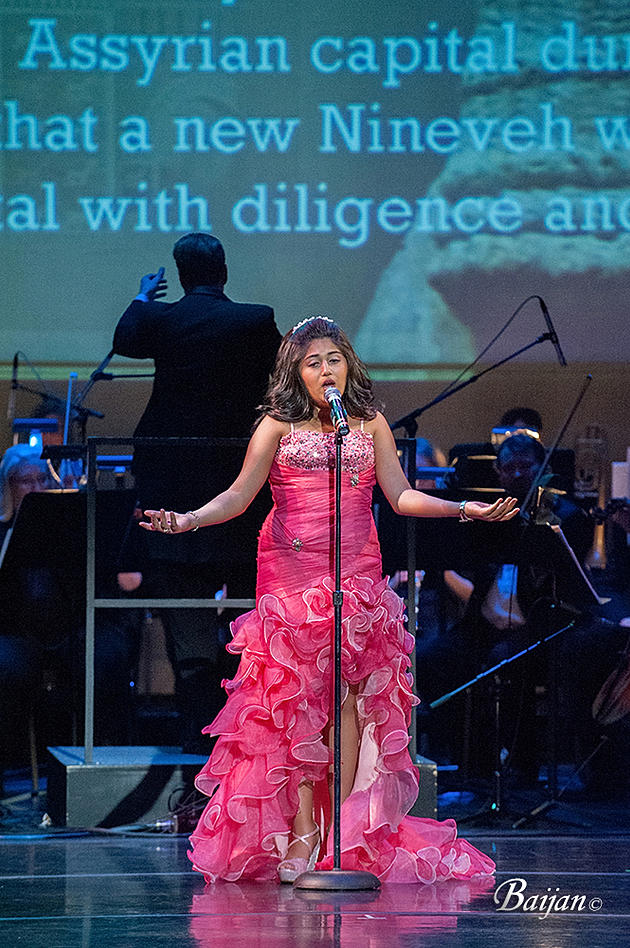 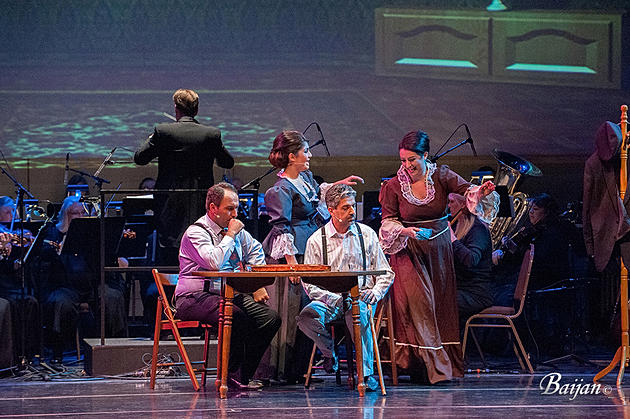 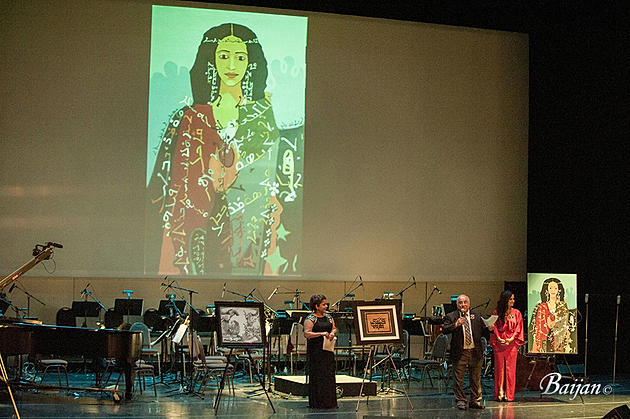 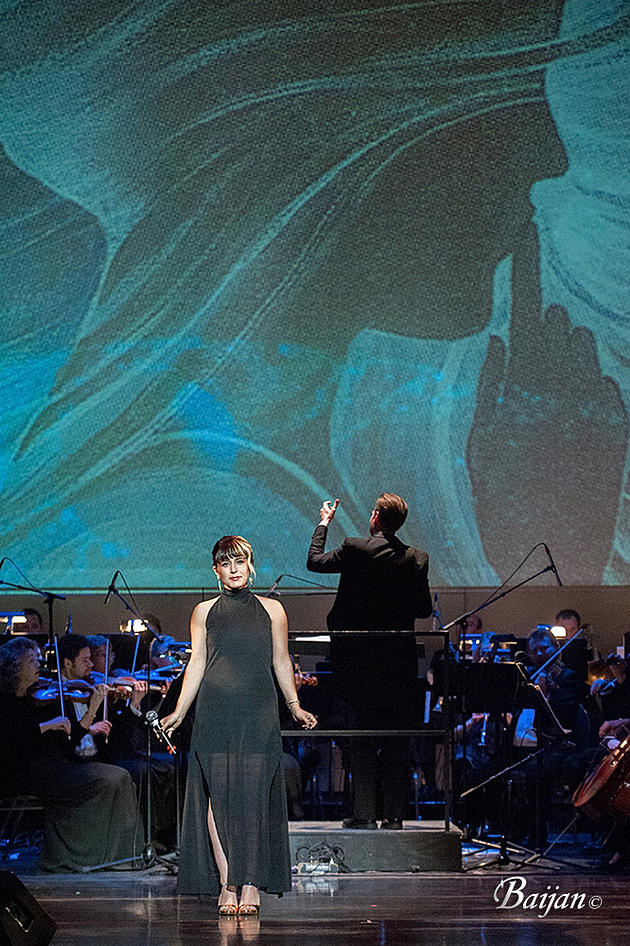 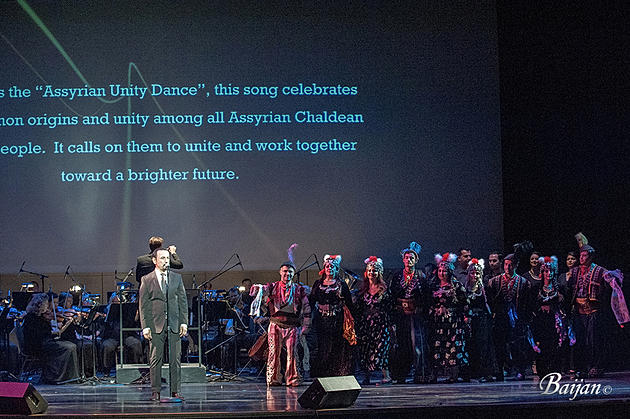