For the past four months, the Australia Chapter of the Assyrian Universal Alliance (AUA) has communicated closely with high officials of the Australian government Authorities regarding the violent attacks in Iraq by the terrorist group called ISIL, the AUA delegation met with The Hon. Julie Bishop, Minister for Foreign Affairs two times during this period and with the office of the Minister for Immigration the Hon Scott Morrison MP, they presented the Minister with a detailed letter about the current situation in Iraq, requested support from the Australian government for a number of issues including immediate economic assistance to address the very basis of the acute humanitarian needs of the Assyrian refugee population, and called for the immediate intervention of the United Nations, the international community and the Australian Government to endorse and to assist in the establishment of a self-administered safe haven in the (the Assyrian heartland in Northern Iraq) in support of the indigenous Christian Assyrian and many other ethnic and religious minorities fleeing the sectarian conflict in Iraq. In addition; pleading with the Australian government, and the international communities, to provide, Assyrians in Iraq who are willing to defend their land with defence facilities and training to enable them to protect themselves.

A similar Letter was handed by Mr Hermiz Shahen, the Deputy Secretary General of the Assyrian Universal Alliance to the Prime Minister of Australia the Hon Tony Abbott MP during the protest that was organised by the Assyrian Council of Australia in Canberra on 27 August 2014.

Mr Shahen, received a reply from the Prime Minister of Australia dated 22 September 2014, affirming his profound concern at the situation in Northern Iraq and his grieving for the ancient communities and faiths that have been destroyed and dislocated by this new barbarism. Mr Abbott said ; “Australia can’t save the world on its own, but we can and should do what’s within our power to help. The Government has announced 4400 places in our refugee programme for people displaced by this conflict and has provide at least $5 million in additional aid. Australian military aircraft have been involved in humanitarian relief efforts; we are consulting with our allies abroad about what else might be done to help Iraqi people better to protect themselves”.

Mr Shahen received a lengthy and detailed response from the Minister for Immigration the Hon Scott Morrison MP, explaining his deep concerns by the ongoing conflict in countries such as Iraq and Syria and the humanitarian crises these have caused.

Mr Morrison assured Mr Shahen that the Australian officials have repeatedly raised the government’s concerns about the persecution of religious and other minorities, including Assyrians at senior levels with the Government of Iraq, and will look to make further representation after a new Iraqi Government is formed; Officials also meet regularly with Christian leaders in Baghdad, most recently on 14 July 2014 to hear their concerns.

Mr Morrison announced on 17 August 2014, that the government had set a side 4400 places in this year’s offshore Humanitarian programme for the resettlement of Iraq and Syrians who have fled conflict in their home countries.

The Hon Julie Bishop MP, Minister for foreign Affairs in her reply to the AUA said:
The Australian Government remains deeply concerned about the escalation of violence in Iraq, and the persecution by the Islamic State of Iraq and the Levant (ISIL) of members of religious and other minorities, including Iraqi Christians . I am aware of recent attacks by ISIL on predominantly Christian towns including Qaraqosh,, in Iraq north, and the destruction of church sites .

The Minister also mentioned that Australia has contributed to a number of United nations Security council statements on the persecution of minorities in Iraq , most recently on 7 August 2014. These statements strongly condemn ISIL attacks on minority communities in Iraq , and refer directly to the plight of Christians in Mosul. The Government will continue to identify opportunities to raise the situation of religious minorities in Iraq, including Assyrian Christians, at International fora including the United Nations.

“I also understand that in January 2014 the Iraqi council of Ministers gave in-principle approval for creation of an autonomous region in the Ninewa plians, home to much of Iraq’s Assyrian Christian community. The decision to form this province will be a matter for consideration by a new Iraqi government”, Mrs Bishop said. 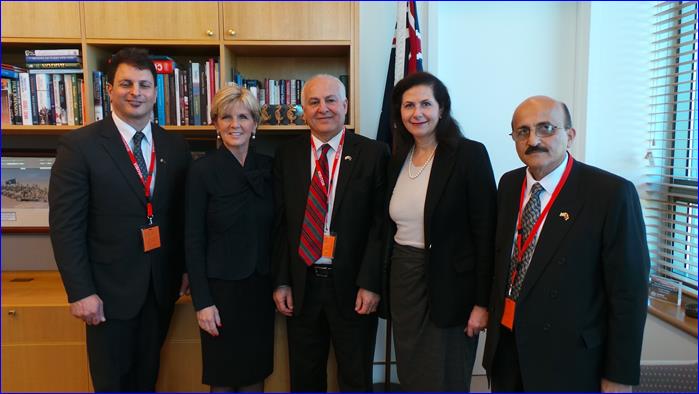 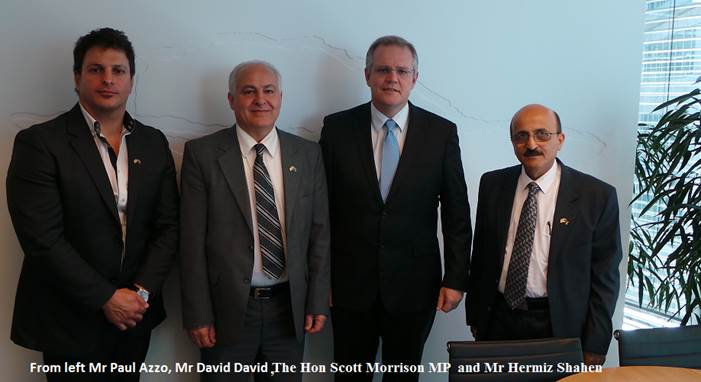