Vatican City (AFP) – A Roman Catholic bishop based in Iraq on Tuesday said international mobilisation against Islamic State militants in Syria and Iraq had come “too late”.

Saying that the IS group was not a major threat only a few months ago, he told AFP: “It would have been very easy, but the international community was in a very deep slumber.”

“We want intervention, but it must be rapid and united, Europe and America together,” he said, speaking on the sidelines of an international meeting at the Vatican of the Catholic charity Caritas.

“Where is the UN, Europe, the European Parliament?” he asked, calling on Europe to “quickly exert pressure to liberate our villages”.

IS militants act like “animals”, he said, adding: “What they have done is against all religions, all the cultures of the 21st century.” 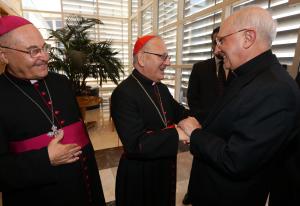 The archbishop of Syria’s second city Aleppo, also attending the meeting, cited estimates that half of Syria’s Christians “have already left”.

Archbishop Antoine Audo said the fall of Iraq’s northern city of Mosul to IS fighers in June sparked “general fear among (Syrian) Christians” that Aleppo would be next.

The cleric said the “official position of the Church is to tell Christians to stay (but) personally I wouldn’t oblige anyone to stay.”

He could not hide his disappointment with the Vatican’s response to the crisis, saying: “Frankly, with everything that is happening in Iraq, in Mosul, we are a bit discouraged. We don’t see many results or effectiveness in all these statements!”

Last month, the Vatican voiced support for US air strikes in Iraq in a rare exception to its policy of peaceful conflict resolution.

The Holy See’s ambassador to the United Nations, Silvano Tomasi, called for “intervention now, before it is too late”.