Sydney– 28 August 2014 Wednesday, 27 August 2014, marked a historic day in Australia’s capital city Canberra. Over 500 people travelling distances of over 400 miles descended on Parliament House in a public demonstration demanding a Self –Administered Safe heaven and international protection and opposing the brutal atrocities currently taking place against the Assyrian Christians in Iraq and Syria. The protesters called out to the government and media to take action and help stop the genocide of Assyrian Christians in their homeland. Under police supervision, a united voice chanted calling for “the protection of the Assyrian Christians in Iraq” and “that a Safe Haven is the only solution”. The protest began at 11:00am. The demonstrators carried signs and Australian and Assyrian Flags . The protest was organized by the Assyrian Council of Australia which was formed on 27 July 2014. Participants in the peaceful protest comprised mainly of the Assyrian Christian community from Sydney and Melbourne, however, many united from different ethnic and religious backgrounds in a show of solidarity against the radical actions undertaken by the self-proclaimed Islamic State (ISIS). There was representation from the Coptic Orthodox Church, H.G. Bishop Suriel from Melbourne who delivered a speech supporting the Christians of Iraq and Syria as well as several other Christian organisations and groups such the Christian Democratic Party and Christian faith & Freedom. The protest was attended by many members of federal parliament as well as members of the NSW parliament. They delivered speeches to a crowd giving total support to the demands of the Assyrians in Iraq. Speakers were: The Hon. Chris Bowen MP, Federal Member for McMahon, Shadow Treasurer of Australia; The Hon Philip Ruddock MP, Member for Berowra; The Hon Matt Thistlethwaite MP, Member for Kingsford Smith; Mr Craig Kelly MP, Federal Member for Hughes; Mr Chris Hayes MP, Member for Fowler and Shadow Government Whip; Reverend the Hon. Fred Nile, MLC, President of the Christian Democratic Party; Mr Andrew Rohan MP, member for Smithfield and Mr Rob Mitchell MP, Federal Member for McEwen & Ms Maria Vamvakinou MP, Member for Calwell, Victoria. Mr Hermiz Shahen, the Deputy Secretary General of the Assyrian Universal Alliance of Australia in his welcoming speech and on behalf of the Assyrian Council of Australia said “In what is being called a modern day Genocide, Assyrian Christians who had lived in the city of Mosul for thousands of years have been targeted, they were told to ‘leave, convert or pay “Jizia”’ (a tax for not being Muslim) and failure to do so would result in ‘Death by the sword’. Under these threats, many have suffered the ultimate price in barbaric executions and beheadings, or have fled the ancient city.” Mr Shahen went on to explain “Thousands of the Iraqi Assyrian population are currently displaced and forced out of their homes and towns. Women, children and the elderly are continually on the move-from city to city, and from village to village-seeking safety for their lives. People are living in great fear and confusion, without any hope for a brighter and better future. Jihadists moved in overnight to claim several Christian towns, forcing tens of thousands of people to flee, having pushed back Kurdish Peshmerga troops, who are stretched thin across several fronts in Iraq. Assyrian towns in the Nineveh Plains’ region which is the homeland for the indigenous Assyrians have been emptied of their original population and are now under the control of the militants.” Mr Shahen also presented a letter on behalf of the Assyrian Council to the Hon Philip Ruddock MP to be hand delivered to the Hon. Tony Abbott MP, Prime Minister of Australia. The call was for the immediate intervention of the United Nations, the international community and the Australian Government to endorse and to assist in the establishment of a self-administered safe haven in the Assyrian heartland in Northern Iraq in support of the indigenous Christian Assyrian and many other ethnic and religious minorities fleeing the sectarian conflict in Iraq. In addition, they called on the Australian government, and the international communities, to provide the Assyrians who are willing to defend their lands with defence facilities and training to enable them to protect themselves. For more information watch the following links : http://www.demotix.com/news/5616490/assyrians-protest-parliament-house-canberra-over-isis-terrorism#media-5616483 Liberal MP Craig Kelly says Government won’t be able to protect people in northern Iraq without use of military force 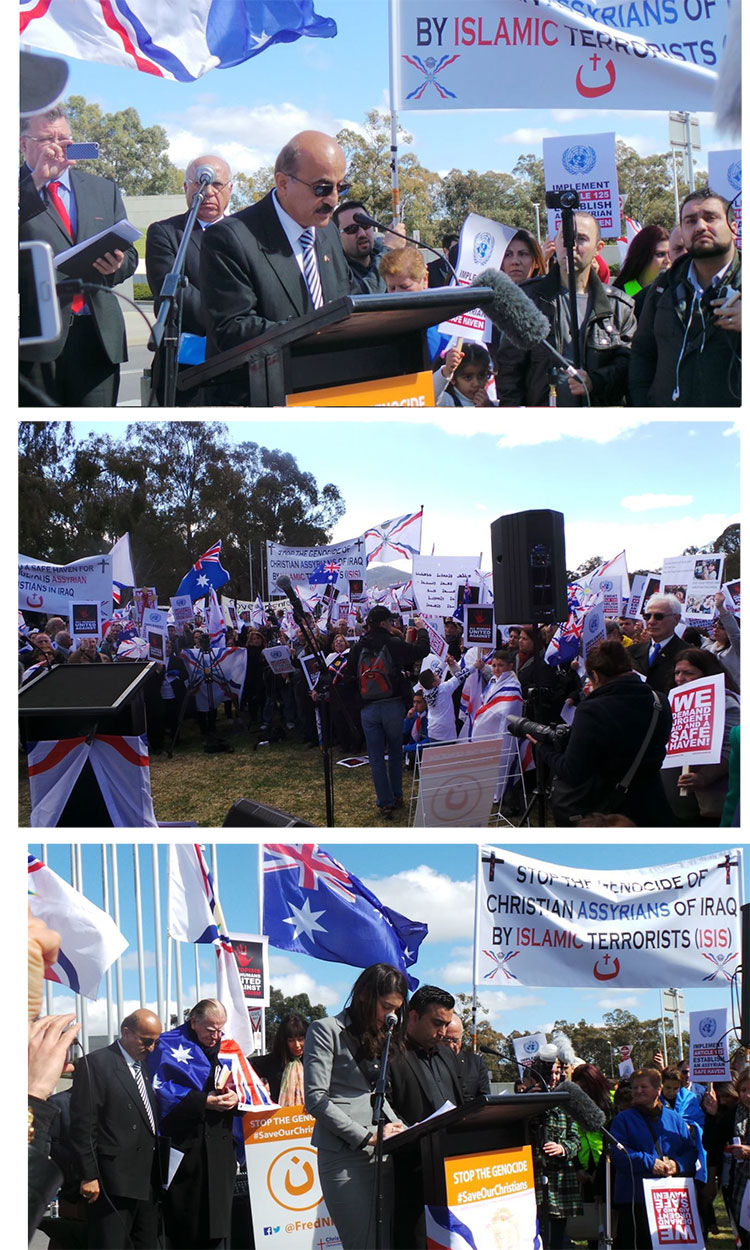 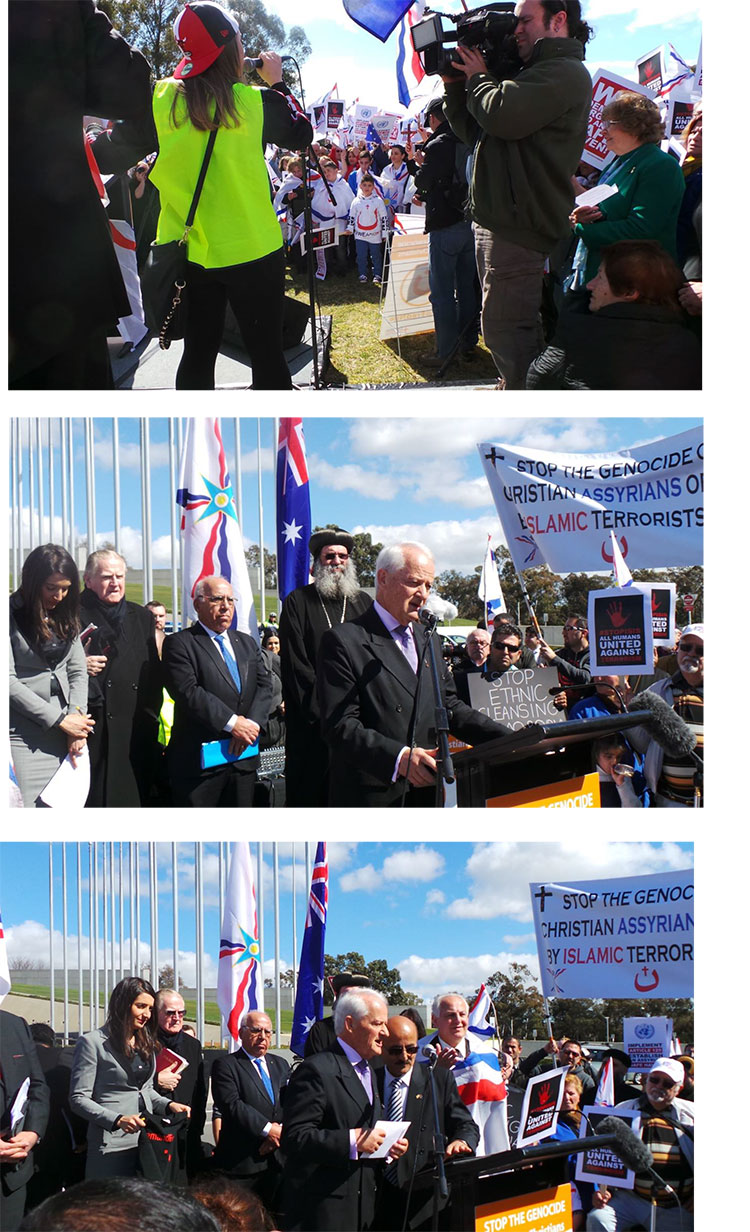 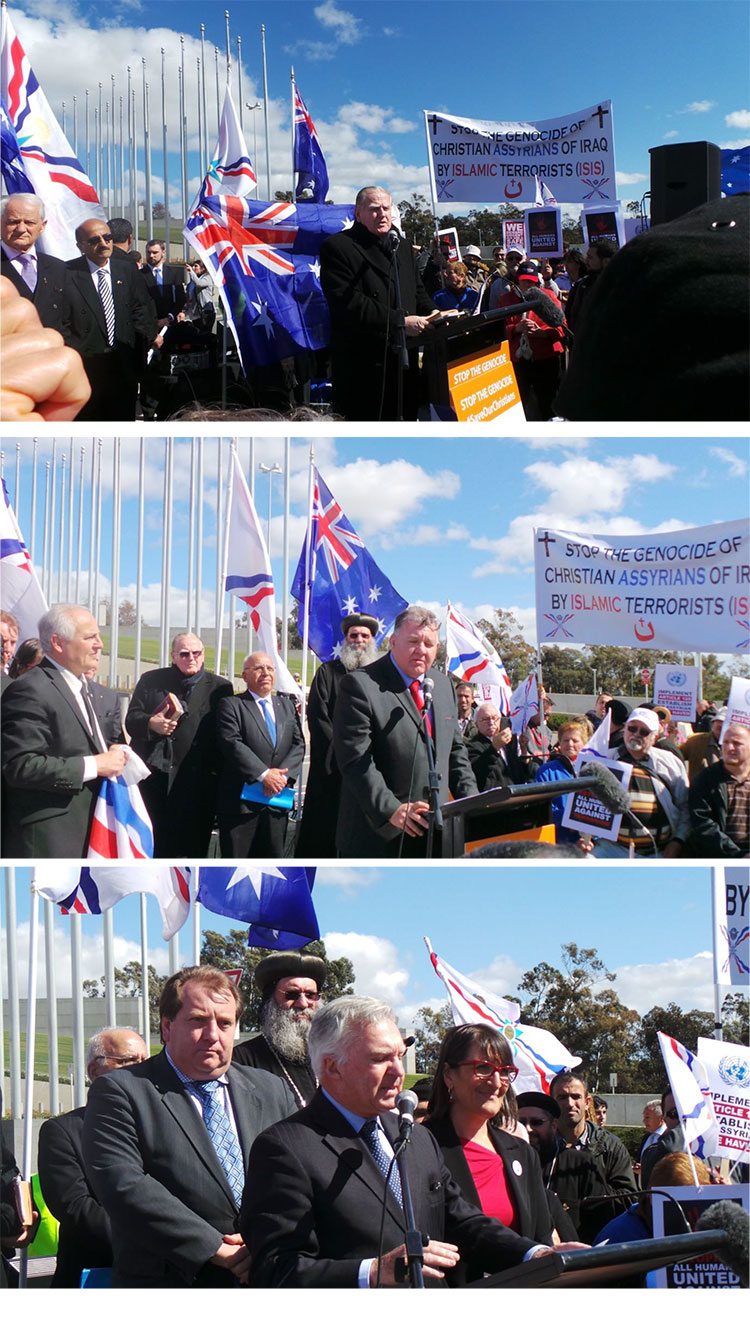 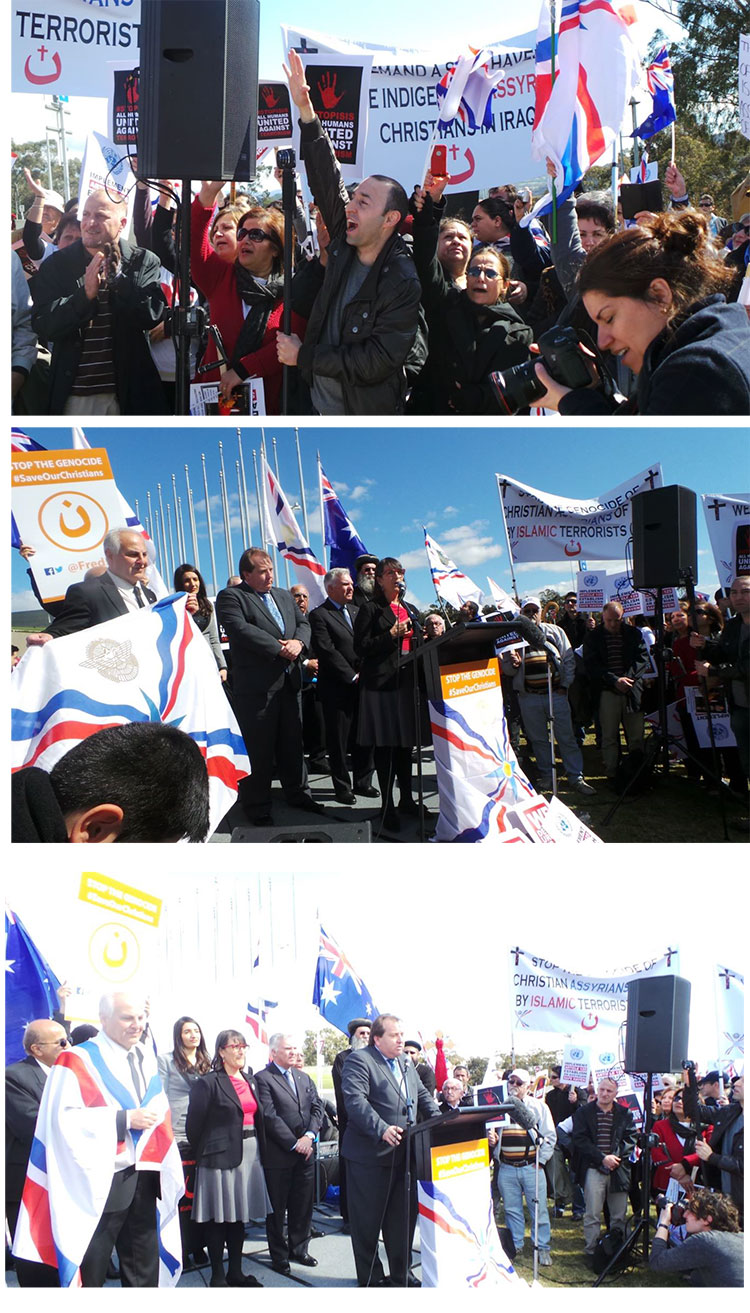 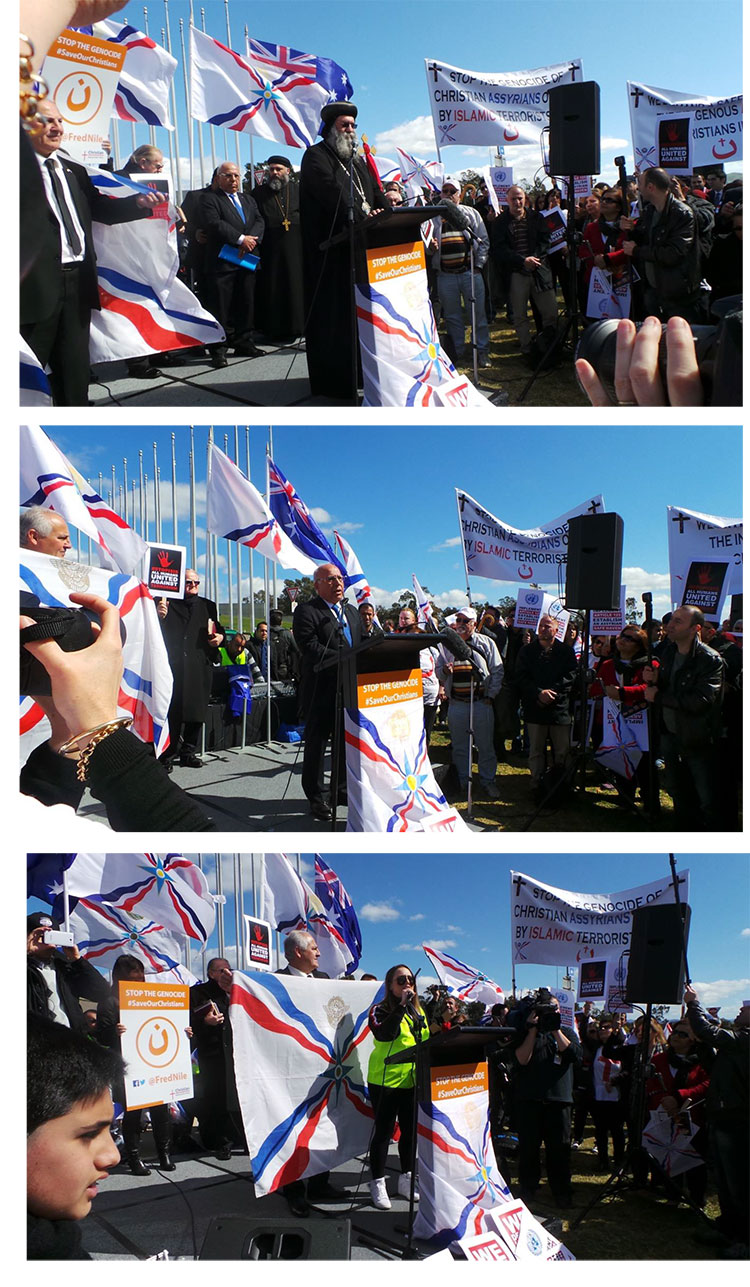 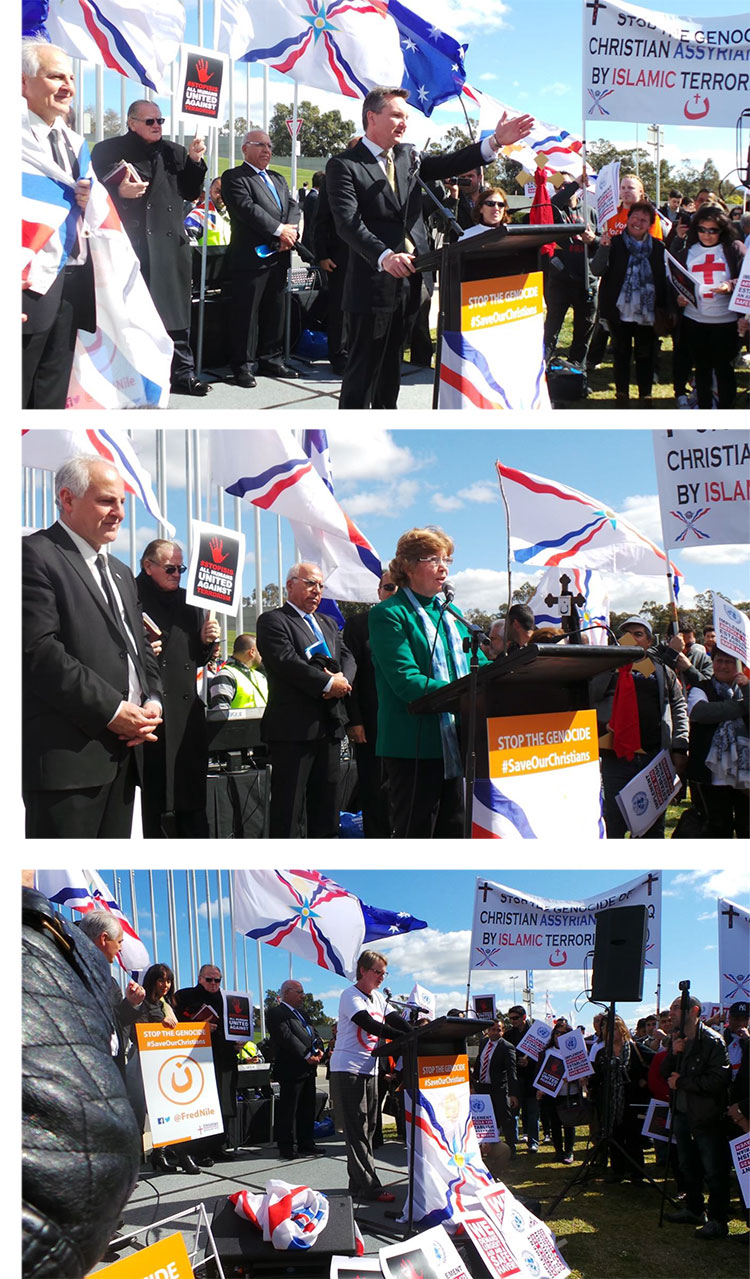 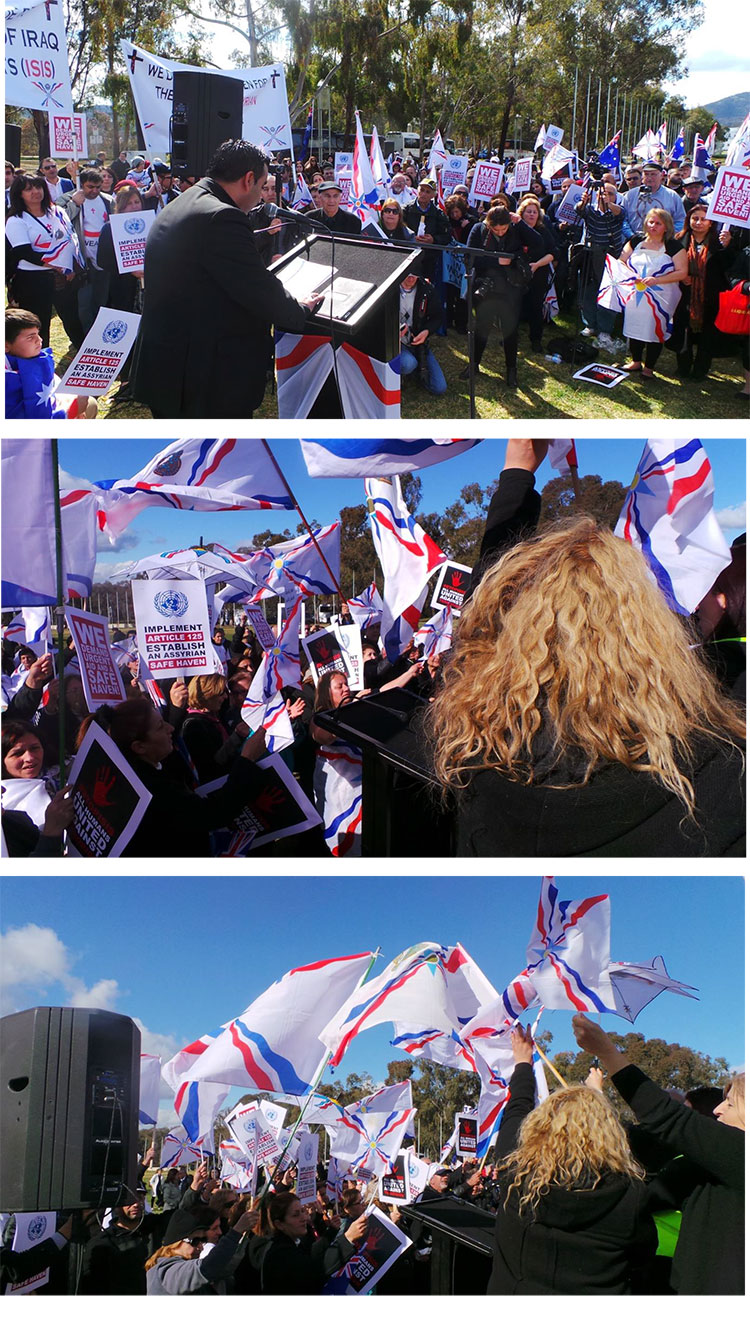