On Friday, January 3, 2020 Umer Jamshaid of WWW.UrduPoint.Com  wrote an article in which the reader was led to believe that I, as Secretary General of the Assyrian Universal Alliance, had conducted an interview with said publication and had made certain statements about the assassination of Gen. Qasem Soleimani.

On Sunday, January 5, 2020 Mr. Hermiz Shanen, Deputy Secretary General of the Assyrian Universal Alliance (AUA), published a Media Release based on the misleading information of the aforementioned article. Mr. Shahen’s action was unexpected and not in line with long-established processes of the AUA.

In fact, I had not conducted such an interview and had not made any such statements. The only publication with respect to this event, to which I have been a signatory, has been a statement published by the representatives of the religious minorities in the Islamic Republic of Iran in which my name appears as the elected representative of the Assyrians to the Parliament of the country.  The misinformation published in Mr. Jamshaid’s article prompted Mr. Shahen to take an action deemed necessary by him and publish a media release that is contrary to all norms of the AUA and does not follow the processes set forth in its constitution and by-laws. This is an unfortunate turn of events and an unexpected action by my Deputy Secretary General that will be discussed and addressed in the next Worldwide Congress of the AUA.

In the meantime, I have reiterated my request, originally made back in September of 2019, to the AUA chairman of the Board of Directors and to a member of the AUA Advisory Board to schedule the next AUA Worldwide Congress no later than April-May, 2020 in a location of their choosing so that elections may be made properly and in accordance with the established rules of the AUA. 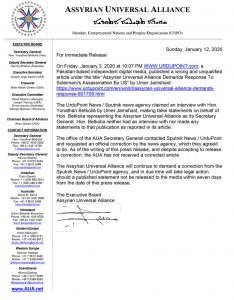 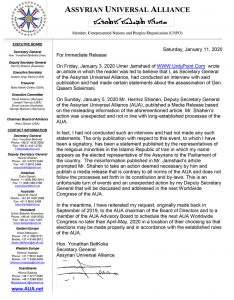 Local Chaldean father wins deportation fight, on the path to…

By: Heather CatalloHe has been the face of the Iraqi…

Qasr al-Yahud (“the Castle of the Jews”) is located in…

As the Middle East and the Arab World witness a…

Three months into Turkey's offensive, an ancient Christian community in…

The Chaldean primate led the ceremony in the presence of…

ANKAWA, Iraq – The Directorate of Syriac Heritage and Museum…

Craig Mauger The Detroit News Lansing — The president of…

UChicago’s Middle East conference asks for papers on ‘gender and…

A way out of deterministic theories

Is our destiny defined by events outside our control, limiting…

The end of Iraqi Christianity?

Why aid is not enough to save Nineveh Plain Christians

Mardean IsaacMembers of the Nineveh Plain Protection Units guard a…

Christians in Iraq welcome 2020 with confidence and desire for…